Saint Felix of Girona (Catalan : Sant Feliu) (died 304) is a Catalan saint. He was martyred at Girona after traveling from Carthage with Saint Cucuphas to Spain as a missionary.

Felix was born in Scillium. His feast day is celebrated on 1 August.

Girona is a city in Catalonia, Spain, at the confluence of the rivers Ter, Onyar, Galligants, and Güell and has an official population of 101,852 in 2019. It is the capital of the province of the same name and of the comarca of the Gironès. It is located 99 km (62 mi) northeast of Barcelona. Girona is a major Catalan city. 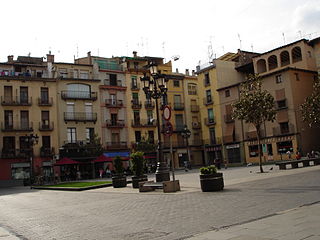 Olot is the capital city of the comarca of Garrotxa, in the Province of Girona, Catalonia, Spain. The city is known for its natural landscape, including four volcanoes scattered around the city center. The municipality is part of the Garrotxa Volcanic Zone Natural Park. Olot is also well known for its cultural activity, with historical art movements like Olot school or factories of religious imagery, which contributed to the location in the city of the main Design and Arts & Crafts school of the province of Girona, the Escola d'Art i Superior de Disseny d'Olot.

The Costa Brava is a coastal region of Catalonia in northeastern Spain, consisting of the comarques (counties) of Alt Empordà, Baix Empordà and Selva in the province of Girona. Costa Brava stretches from the town of Blanes, 60 km (37 mi) northeast of Barcelona, to the French border. In the 1950s, the Costa Brava was identified by the Spanish government and local entrepreneurs as being suitable for substantial development as a holiday destination, mainly for package holiday tourists from Europe. The combination of a very good summer climate, nature, excellent beaches and a favourable foreign exchange rate, which made Costa Brava an attractive tourist destination, was exploited by the construction of large numbers of hotels and apartments in such seaside resorts as Blanes, Tossa de Mar and Lloret de Mar. Tourism rapidly took over from fishing as the principal business of the area.

Tordera is a city in the comarca of Maresme, province of Barcelona, Catalonia, Spain, situated 64 km from Barcelona and 36 km from Girona on the edge of the Montnegre natural park. Its population as of 2010 was 15,641.

Girona Futbol Club, S.A.D. is a professional football club based in Girona, Catalonia, Spain. Founded on 23 July 1930, it plays in Segunda División. Girona holds its home matches at the 13,450-capacity Estadi Montilivi.

Arenys de Mar is one of the main municipalities of the comarca of Maresme, Barcelona Province, Catalonia, Spain. It is situated on the coast between Caldes d'Estrac and Canet de Mar, about 20 kilometres northeast of Barcelona. As of 2010, it had a population of 14,688.

Sant Feliu de Guíxols or San Félix de Guijoles in Spanish is a municipality in the comarca of the Baix Empordà in province of Gerona, Spain. It is situated on the Costa Brava and is an important port and tourist centre. The district abuts to the north, the upmarket s'Agaró resort built round the Sant Pol Beach. In addition to tourism and the port the cork industry is a traditionally local industry. The town contains a large monastery which now houses the town museum and is a protected historico-artistic monument. The C-253 road runs north along the coast to Platja d'Aro and Palamós, while the C-65 road runs inland from the town. The GI-682 provides a dramatic cliff top drive to Tossa de Mar to the south.

Mont-Ras is a village and rural district situated between the larger towns of Palafrugell and Palamos on the Costa Brava in Baix Emporda, in the province of Girona, Catalonia, Spain. Mont-ras is approximately 40 minutes from Girona, or 80 minutes from Barcelona.

Vilaür is a municipality in the comarca of Alt Empordà, Girona, Catalonia, Spain.

Saint Baudilus is venerated as a martyr by the Catholic Church. His cult is closely associated with the city of Nîmes but also spread into Spain.

Diari de Girona is a Catalan daily newspaper, based in Girona, Catalonia.

Sarrià de Ter is a village in the province of Girona and autonomous community of Catalonia, Spain. It is part of the metropolitan area of the city of Girona.

Domènec Fita i Molat is a Spanish artist.

Sant Feliu may refer to: 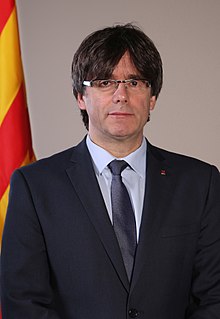 Carles Puigdemont i Casamajó is a Catalan pro-independence politician and journalist from Spain. He lives in self-imposed exile in Belgium, under threat of arrest if he returns to Spain. A former Mayor of Girona, Puigdemont served as President of the Government of Catalonia from January 2016 to October 2017 when he was removed from office by the Spanish Government following the unilateral Catalan declaration of independence. He is co-founder of the National Call for the Republic (CNxR) and leader of the Junts per Catalunya (JuntsxCat) electoral alliance.

The Collegiate Church of St. Felix is a basilica dedicated to St. Felix in the Spanish city of Girona, dating to the early days of Christianity. It houses the offices of the Parish of Sant Feliu, the Roman Catholic Diocese of Girona, so called because it was the main church of Girona before the construction of the cathedral. Its construction, in honor of Felix of Girona, occurred from the 12th century until the 17th century. It retains much of the Romanesque construction, completed later with a Gothic nave and a covered baroque facade. It is notable for its eight Roman and early Christian sarcophagi of the 3rd and 4th centuries, along with the Gothic tomb of Narcissus of Girona who, according to tradition, was one of the early bishops of the see.

The Maritime Rescue Museum is an old rescue shipwreck station located in the port of Sant Feliu de Guíxols, in the Baix Empordà region. It was built in the 19th century and it is protected as a Bé Cultural d'Interès Local, a cultural asset of local interest.