Forgotten Silver purports to tell the story of "forgotten" New Zealand filmmaker Colin McKenzie, and the rediscovery of his lost films, which presenter Peter Jackson claims to have found in an old shed. McKenzie is presented as the first and greatest innovator of modern cinema, single-handedly inventing the tracking shot (by accident), the close-up (unintentionally), and both sound and color film years before their historically documented creation. The film also shows fragments of an epic Biblical film, Salome, supposedly made by McKenzie in a giant set in the forests of New Zealand, and a "computer enhancement" of a McKenzie film proving that New Zealander Richard Pearse was the first man to invent a powered aircraft, several months before the Wright Brothers. [1]

In reality, McKenzie is a fictional character, and the films featured in Forgotten Silver were all created by Peter Jackson, carefully mimicking the style of early cinema. The interviewees are all acting. Thomas Robins, the actor who portrays Colin McKenzie, is today more easily recognized by audiences as Sméagol's ill-fated cousin Déagol in Jackson's The Lord of the Rings: The Return of the King .

Costa Botes directed the "documentary" portions while Peter Jackson created the "archive footage" supposedly filmed by McKenzie. Jackson also shot fake interviews in Los Angeles, including the one with Weinstein.

The film was first aired on Television New Zealand's channel TV ONE at a time usually dedicated to plays and mini-series, but was billed and introduced as a serious documentary. Many viewers were fooled until the directors shortly afterwards revealed that it was a hoax. This created controversy. [2] [3] The film was later screened at film festivals.

A mockumentary, fake documentary or docu-comedy is a type of film or television show depicting fictional events but presented as a documentary. 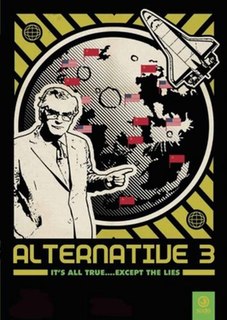 Alternative 3 is a hoax documentary television programme, broadcast once only in the United Kingdom in 1977, and later transmitted in Australia, Canada and New Zealand, as a fictional hoax. Purporting to be an investigation into the UK's contemporary "brain drain", Alternative 3 uncovered a plan to make the Moon and Mars habitable in the event of climate change and a terminal environmental catastrophe on Earth.

Docudrama is a genre of television and film, which features dramatized re-enactments of actual events. It is described as a hybrid of documentary and drama and "a fact-based representation of real event". 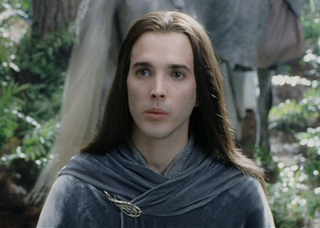 Figwit is a fan-created name for a then-unnamed elf in Peter Jackson's The Lord of the Rings film series, played by Bret McKenzie of the musical duo Flight of the Conchords. The name Figwit derives from an acronym for "Frodo is grea...who is THAT?!?" [sic]. The character quickly and unexpectedly became popular among Tolkien fandom, and is perceived as an example of famous for being famous, a view shared by the character's actor himself.

F for Fake is a 1973 docudrama film co-written, directed by, and starring Orson Welles who worked on the film alongside François Reichenbach, Oja Kodar, and Gary Graver. Initially released in 1974, it focuses on Elmyr de Hory's recounting of his career as a professional art forger; de Hory's story serves as the backdrop for a meandering investigation of the natures of authorship and authenticity, as well as the basis of the value of art. Far from serving as a traditional documentary on de Hory, the film also incorporates Welles's companion Oja Kodar, hoax biographer Clifford Irving, and Orson Welles as himself. F for Fake is sometimes considered an example of a film essay.

A recurring theme in the literary, theatrical, and film tradition of comedy is the use of stock characters representing authority figures, designed to poke fun at officialdom by showing that its members are not immune to entanglement in the ridiculous. This is an old tradition, well illustrated in works such as Chaucer's Canterbury Tales and Voltaire's Candide. This practice arises in part from the desire of those subject to the power of those in authority to use any available means of limiting this power by demonstrating that the authority figure is just as subject to mockery as those lacking power. This represents "the attempt to use aggression to protect oneself from engulfment, impingement or humiliation by diminishing the perceived power and threat of the other", an effort which often takes the form of caricature of those in authority. 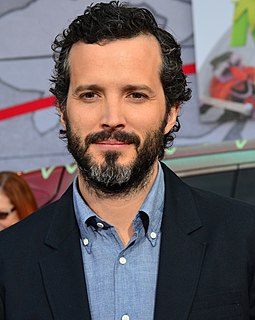 Bret Peter Tarrant McKenzie is a New Zealand musician, comedian, music supervisor, and former actor. He is best known as one half of musical comedy duo Flight of the Conchords along with Jemaine Clement. In the 2000s, the duo's comedy and music became the basis of a BBC radio series and then an oft-lauded American television series, which aired for two seasons on HBO. Active since 1998, the duo released their most recent comedy special, Live in London, in 2018.

Jeffrey Thomas is a Welsh-born New Zealand actor and writer, best known for his film, television and stage roles.

Alien Abduction: Incident in Lake County is a 1998 American pseudo-documentary horror television film directed by Dean Alioto. It is a larger-budget version of The McPherson Tape, and originally aired on UPN on January 18, 1998. Kristian Ayre plays Tommy, a teenager in Lake County, Montana, who is making a home movie of his family's Thanksgiving dinner when they are attacked and ultimately abducted by extraterrestrials.

The Police Tapes is a 1977 documentary about a New York City police precinct in the South Bronx. The original ran ninety minutes and was produced for public television; a one-hour version later aired on ABC.

The notion that the Apollo Moon landings were hoaxes perpetrated by NASA and other agencies has appeared many times in popular culture. Not all references to Moon landing conspiracy theories are in support of them, but the ideas expressed in them have become a popular meme to reference, both in humor and sincerity.

Alun Robert Bollinger is a New Zealand cinematographer, who has worked on several Peter Jackson films, and many other films in New Zealand. He has also been a Director of Photography, including the second unit for Peter Jackson's trilogy The Lord of the Rings. He started as a trainee cine-camera operator for television with the New Zealand Broadcasting Corporation in 1966.

Sir Peter Robert Jackson is a New Zealand film director, screenwriter and producer. He is best known as the director, writer and producer of the Lord of the Rings trilogy (2001–2003) and the Hobbit trilogy (2012–2014), both of which are adapted from the novels of the same name by J. R. R. Tolkien. Other notable films include the critically lauded drama Heavenly Creatures (1994), the horror comedy The Frighteners (1996), the epic monster remake film King Kong (2005), the World War I documentary film They Shall Not Grow Old (2018) and the documentary The Beatles: Get Back (2021). He is the third-highest-grossing film director of all-time, his films having made over $6.5 billion worldwide.

Thomas Robins is a New Zealand Producer, Director, Writer and Actor who was the original host of Squirt, a children's television series. He has also played roles in four films directed by Peter Jackson, the most notable being Déagol in The Lord of the Rings: The Return of the King.

Kristian John Ayre is a Canadian actor, best known for his portrayal of the character Radu from the Nickelodeon children's science fiction show Space Cases.

The 2016 New Year Honours in New Zealand were appointments by Elizabeth II in her right as Queen of New Zealand, on the advice of the New Zealand government, to various orders and honours to reward and highlight good works by New Zealanders, and to celebrate the passing of 2015 and the beginning of 2016. They were announced on 31 December 2015.

The 2012 Queen's Birthday and Diamond Jubilee Honours in New Zealand, celebrating the official birthday and diamond jubilee of Queen Elizabeth II, were appointments made by the Queen in her right as Queen of New Zealand, on the advice of the New Zealand government, to various orders and honours to reward and highlight good works by New Zealanders. They were announced on 4 June 2012.