Fort Douglas was the Selkirk Settlement (Red River Colony) fort and the first fort associated with the Hudson's Bay Company near the confluence of the Red and Assiniboine rivers in today's city of Winnipeg. Named for Thomas Douglas, 5th Earl of Selkirk, founder of the Selkirk Settlement, the fort was built by Scottish and Irish settlers beginning in 1813. Completed in 1815, it was in the immediate vicinity (down river) of the North West Company establishment, Fort Gibraltar. [1]

After the Battle of Seven Oaks in 1816, during the conflict between the Hudson's Bay Company and the North West Company, the fort was captured by the Métis and employees of the North West Company. [2] The fort was soon retaken by Selkirk's men and there was a short period of relative peace. Thomas Douglas, 5th Earl of Selkirk lived at the fort during his visit to the Selkirk Settlement (Red River Colony) in the summer of 1817. It was later used as a trading post and was the residence of the Governor of Assiniboia. Following the amalgamation of the Hudson's Bay Company (HBC) and the North West Company (NWC) in 1821, the HBC's operations were relocated to the NWC's Fort Gibraltar, renamed Fort Garry. Fort Douglas remained the residence of the Governor of Assiniboia until it was mostly destroyed in the great Red River flood of 1826. [3] A second flood in 1852 swept away remnants. 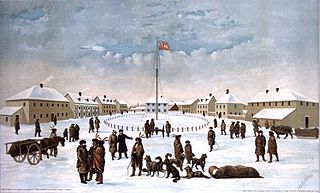 The Red River Colony was a colonization project set up in 1811 by Thomas Douglas, 5th Earl of Selkirk, on 300,000 square kilometres (120,000 sq mi) of land. This land was granted to him by the Hudson's Bay Company, which is referred to as the Selkirk Concession, which included the portions of Rupert's Land, or the watershed of Hudson Bay, bounded on the north by the line of 52° N latitude roughly from the Assiniboine River east to Lake Winnipegosis. It then formed a line of 52° 30′ N latitude from Lake Winnipegosis to Lake Winnipeg, and by the Winnipeg River, Lake of the Woods and Rainy River.

Andrew McDermot was a Hudson's Bay Company (HBC) employee who became a prominent independent fur trade merchant and member of the Council of Assiniboia.

Robert Semple was Governor of the territories owned by the Hudson's Bay Company from autumn 1815 until his death.

Miles MacDonell was the first governor of the Red River Colony, a 19th-century Scottish settlement located in present-day Manitoba and North Dakota. 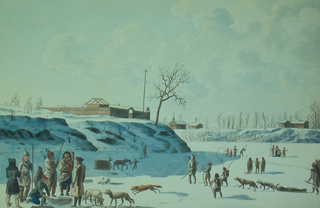 Fort Carlton was a Hudson's Bay Company fur trade post from 1795 until 1885. It was located along the North Saskatchewan River not far from Duck Lake, Saskatchewan. It was rebuilt by the Saskatchewan government as a feature of a provincial historic park and can be visited today. It is about 65 kilometres north of Saskatoon. 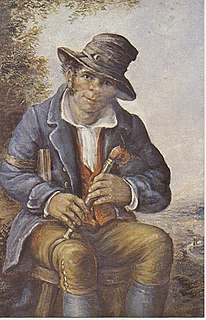 John Peter Pruden was an early pioneer of western Canada which at the time was known as Rupert's Land. During his many years of employment as a fur-trader with the Hudson's Bay Company (HBC), he had extensive interactions with such First Nations as the Cree and Blackfoot. He was known to have spoken Cree fluently, a fact which was confirmed by HBC administrator Sir George Simpson in his famous but "sometimes erratic" 1832 Character Book.