Frank McDonald (born c. 1933) was an American football player. McDonald grew up in Nutley, New Jersey, and attended the University of Miami. [1] He played college football at the end position for the Miami Hurricanes football team. He was selected by the Associated Press and the Football Writers Association of America as a first-team player on their respective 1954 College Football All-America Teams. [2] He was inducted into the University of Miami Sports Hall of Fame in 1974. [3] 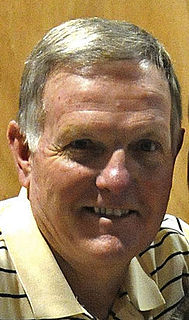 Michael Jerome Irvin is an American sports commentator and former football wide receiver. Irvin played college football at the University of Miami, and was selected in the first round of the 1988 NFL Draft by the Dallas Cowboys. He spent his entire 12-year National Football League (NFL) career (1988-1999) with the team, before it ended due to a spinal cord injury. Irvin was nicknamed "The Playmaker" due to his penchant for making big plays in big games during his college and pro careers. He is one of three key Cowboys offensive players who helped the team attain three Super Bowl wins: he is known as one of "The Triplets" along with Troy Aikman and Emmitt Smith. He is also a former broadcaster for ESPN's Sunday NFL Countdown and currently an analyst for NFL Network. In 2007, he was selected to the Pro Football Hall of Fame. 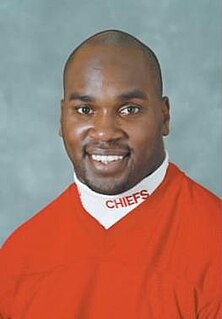 Derrick Vincent Thomas, nicknamed D.T., was an American football linebacker and defensive end who played for the Kansas City Chiefs of the National Football League (NFL). Thomas was drafted fourth overall by the Chiefs in the 1989 NFL Draft where he spent the entirety of his 11-year career until his death in 2000. Considered one of the greatest pass rushers of all time, he was named to nine Pro Bowls and holds the record for most sacks in a single game at seven.

Thomas Henry Nobis Jr. was an American football linebacker who played in the National Football League (NFL) for 11 seasons with the Atlanta Falcons. He played college football at the University of Texas and was the first overall selection in the 1966 NFL draft.

Russell James Maryland is a former professional American football player. He played defensive tackle for ten seasons for the Dallas Cowboys, Oakland Raiders and Green Bay Packers of the National Football League (NFL). He was drafted by the Cowboys first overall in the 1991 NFL Draft. He played college football for the University of Miami Hurricanes.

Carlos Alvarez Vasquez Rodriguez Ubieta is a former American football college player who was a consensus All-American wide receiver for the Florida Gators football team of the University of Florida from 1969 to 1971. 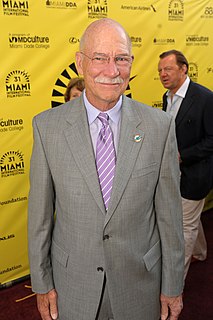 Richard Paul "Dick" Anderson is a former American college and professional football player who was a safety for the Miami Dolphins of the American Football League (AFL) and National Football League (NFL) for nine seasons during the 1960s and 1970s. He played college football for the University of Colorado, and was recognized as a consensus All-American. He was selected in third round of the 1968 AFL Draft, and he played for his entire professional career for the Dolphins.

Hugh Donell Green is a former professional American football player who was a linebacker in the National Football League (NFL) for eleven seasons during the 1980s and 1990s. He played college football for the University of Pittsburgh, and was recognized as a three-time consensus All-American. Green was selected in the first round of the 1981 NFL Draft, and played professionally for the Tampa Bay Buccaneers and the Miami Dolphins.

Donald McNeal is a former American professional football player who played cornerback for the Miami Dolphins in the 1980s. 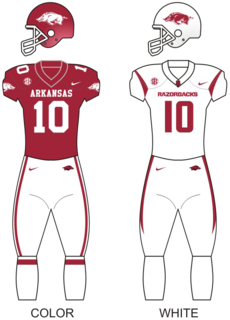 The Arkansas Razorbacks football program represents the University of Arkansas, located in Fayetteville, Arkansas, in the sport of American football. The Razorbacks compete in the Football Bowl Subdivision (FBS) of the National Collegiate Athletic Association (NCAA) and the Western Division of the Southeastern Conference (SEC). The program has 1 national championship awarded by the Football Writers Association of America (FWAA) and Helms Athletic Foundation (HAF) in 1964, 1 national championship awarded by the Foundation for the Analysis of Competitions and Tournaments (FACT) in 1977, 13 conference championships, 45 All-Americans, and an all-time record of 716–504–40. Home games are played at locations on or near the two largest campuses of the University of Arkansas System: Donald W. Reynolds Razorback Stadium in Fayetteville, and War Memorial Stadium in Little Rock.

Gregory Donald Pruitt is a former American football running back in the National Football League (NFL) from 1973 through 1984. He was selected to five Pro Bowls, four as a member of the Cleveland Browns and one as a member of the Los Angeles Raiders, the last one as a kick returner. He was also part of the Raiders' Super Bowl XVIII winning team, beating the Washington Redskins.

Jarvis Eric Williams, Sr. was an American college and professional football player who was a defensive back in the National Football League (NFL) for seven seasons during the 1980s and 1990s. Williams played college football for the University of Florida, and was recognized as an All-American. Thereafter, he played professionally for the Miami Dolphins and the New York Giants of the NFL. Williams died unexpectedly at the age of 45.

John Lewis "Stub" Brickels was a high school, college and professional football coach who served as a backfield coach for the Cleveland Browns between 1946 and 1948. Brickels began his coaching career in 1930, after graduating from Wittenberg University in Ohio, where he was a standout as a halfback on the school's football team. He coached high school football and basketball teams in Ohio and West Virginia in the 1930s and early 1940s before becoming the head basketball coach at the West Virginia University in 1944. He held that post until 1945, when Cleveland Browns coach Paul Brown hired him to recruit players for the Browns, a team under formation in the All-America Football Conference, while Brown served in the U.S. Navy during World War II.