Fredrik Sejersted (born 2 July 1965) is a Norwegian jurist, and the current Attorney General of Norway.

He is a son of Francis and Hilde Sejersted. [1] He has been a professor of law at the University of Oslo, and is known for chairing the Sejersted Commission (Seijersted-utvalget) from 2010 until they delivered the Norwegian Official Report 2012:2. [2] He was appointed Attorney General of Norway from 2015, taking over the position after Sven Ole Fagernæs. [3] In 2019, Carl Baudenbacher harshly criticized Sejersted in an op-ed for allegedly trying to undermine the law and courts of the European Free-Trade Area. [4] Sejersted published a rebuttal in a similarly harsh op-ed. [5]

Botnedalen is a valley in the municipality of Tokke in Telemark, Norway. It used to contain a number of mountain farms. Water from the lake Botnedalsvatn is utilised in the Byrte Hydroelectric Power Station.

Langfjorden is a fjord in the municipitality of Alta in Troms og Finnmark, Norway. It is a 30 kilometre long westward branch of Altafjorden. At the bottom of the fjord is the village Langfjordbotn.

Reinøya is an island in the municipality of Vardø in Troms og Finnmark, Norway. It is located west of Hornøya. Reinøya has a rich birdlife.

Mefjorden is a fjord in Senja Municipality in Troms og Finnmark county, Norway. The 16-kilometre (9.9 mi) long fjord cuts into the large island of Senja from northwest. The villages of Mefjordvær and Senjahopen are located at the southern side of the fjord, and at the innermost point in the fjord is the village of Mefjordbotn. 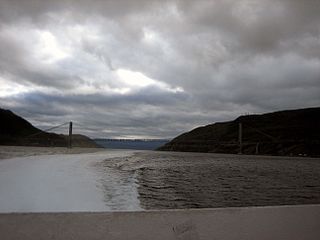 Kvalsundet is a strait in Hammerfest Municipality in Troms og Finnmark county, Norway. The strait separates the island of Kvaløya from the mainland. The strait is crossed by Kvalsund Bridge, which connects Kvaløya to the mainland and is the world's northernmost suspension bridge. Norway's first power station based on tidal currents is located in the strait.

Events from the year 1926 in Sweden

Sven Kærup Bjørneboe is a Norwegian essayist. He was born in Kristiansand, and is a nephew of writer Jens Bjørneboe.

Terje Nordberg is a Norwegian comics artist, comics writer and magazine editor. He lives in San Jose, California with his wife Nancy. He is also a painter having painted scenes of California, often with whimsical cows. 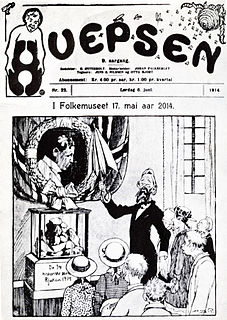 Johan Fredrik Thaulow was a Norwegian physician and Army officer.

Vibeke Engelstad was a Norwegian physician and specialist in psychiatry.

Andreas Ugland was a Norwegian ships engineer and shipowner.