The theorem is a corollary of the homotopy excision theorem.

Statement of the theorem

Let X be an n-connected pointed space (a pointed CW-complex or pointed simplicial set). The map

A basic result on loop spaces gives the relation

with the small caveat that in this case one must be careful with the indexing.

As mentioned above, the Freudenthal suspension theorem follows quickly from homotopy excision; this proof is in terms of the natural map

-connected, then the pair of spaces

is the reduced cone over

; this follows from the relative homotopy long exact sequence. We can decompose

as two copies of

and a surjection on

and since in addition cones are contractible,

Putting this all together, we get

, as claimed above; for

the left and right maps are isomorphisms, regardless of how connected

by the Freudenthal theorem. These groups represent the kth stable homotopy group of spheres. 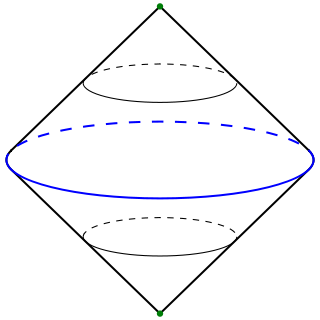 In topology, the suspension of a topological space X is intuitively obtained by stretching X into a cylinder and then collapsing both end faces to points. One views X as "suspended" between these end points.

In topology, a branch of mathematics, the loop space ΩX of a pointed topological space X is the space of (based) loops in X, i.e. continuous pointed maps from the pointed circle S1 to X, equipped with the compact-open topology. Two loops can be multiplied by concatenation. With this operation, the loop space is an A∞-space. That is, the multiplication is homotopy-coherently associative.

In mathematics, the Whitehead product is a graded quasi-Lie algebra structure on the homotopy groups of a space. It was defined by J. H. C. Whitehead in.

In mathematics, the EHP spectral sequence is a spectral sequence used for inductively calculating the homotopy groups of spheres localized at some prime p. It is described in more detail in Ravenel and Mahowald (2001). It is related to the EHP long exact sequence of Whitehead (1953); the name "EHP" comes from the fact that George W. Whitehead named 3 of the maps of his sequence "E", "H", and "P".

In the mathematical disciplines of algebraic topology and homotopy theory, Eckmann–Hilton duality in its most basic form, consists of taking a given diagram for a particular concept and reversing the direction of all arrows, much as in category theory with the idea of the opposite category. A significantly deeper form argues that the fact that the dual notion of a limit is a colimit allows us to change the Eilenberg–Steenrod axioms for homology to give axioms for cohomology. It is named after Beno Eckmann and Peter Hilton.

In algebraic topology, the homotopy excision theorem offers a substitute for the absence of excision in homotopy theory. More precisely, let be an excisive triad with nonempty, and suppose the pair is ()-connected, , and the pair is -connected, . Then the map induced by the inclusion ,

In algebra, Quillen's Q-construction associates to an exact category an algebraic K-theory. More precisely, given an exact category C, the construction creates a topological space so that is the Grothendieck group of C and, when C is the category of finitely generated projective modules over a ring R, for , is the i-th K-group of R in the classical sense. One puts

The Whitehead product is a mathematical construction introduced in Whitehead (1941). It has been a useful tool in determining the properties of spaces. The mathematical notion of space includes every shape that exists in our 3-dimensional world such as curves, surfaces, and solid figures. Since spaces are often presented by formulas, it is usually not possible to visually determine their geometric properties. Some of these properties are connectedness, the number of holes the space has, the knottedness of the space, and so on. Spaces are then studied by assigning algebraic constructions to them. This is similar to what is done in high school analytic geometry whereby to certain curves in the plane are assigned equations. The most common algebraic constructions are groups. These are sets such that any two members of the set can be combined to yield a third member of the set. In homotopy theory, one assigns a group to each space X and positive integer p called the pth homotopy group of X. These groups have been studied extensively and give information about the properties of the space X. There are then operations among these groups which provide additional information about the spaces. This has been very important in the study of homotopy groups.

In mathematics, homotopy theory is a systematic study of situations in which maps come with homotopies between them. It originated as a topic in algebraic topology but nowadays it is studied as an independent discipline. Besides algebraic topology, the theory has also been in used in other areas of mathematics such as algebraic geometry and category theory.