Last updated August 21, 2020
Database of geographical objects maintained by the United States National Geospatial-Intelligence Agency
Not to be confused with GeoNames.

The GEOnet Names Server (GNS), sometimes also referred to in official documentation as Geographic Names Data [1] or geonames [2] in domain and email addresses, is a service that provides access to the United States National Geospatial-Intelligence Agency's (NGA) and the US Board on Geographic Names's (BGN) database of geographic feature names and locations for locations outside the US. The database is the official repository for the US Federal Government on foreign place-name decisions approved by the BGN. Approximately 20,000 of the database's features are updated monthly.[ citation needed ] Names are not deleted from the database, "except in cases of obvious duplication". [3] The database contains search aids such as spelling variations and non-Roman script spellings in addition to its primary information about location, administrative division, and quality.

As of May 2020 [update] , the GEOnet Names Server was unavailable to users of mainstream web browsers without extra configuration, due to its HTTPS-only website's public key certificate being issued from an internal U.S. Department of Defense root CA not trusted by the main browser vendors.

Hypertext Transfer Protocol Secure (HTTPS) is an extension of the Hypertext Transfer Protocol (HTTP). It is used for secure communication over a computer network, and is widely used on the Internet. In HTTPS, the communication protocol is encrypted using Transport Layer Security (TLS) or, formerly, Secure Sockets Layer (SSL). The protocol is therefore also referred to as HTTP over TLS, or HTTP over SSL.

Netscape Communications Corporation was an independent American computer services company with headquarters in Mountain View, California and then Dulles, Virginia. Its Netscape web browser was once dominant but lost to Internet Explorer and other competitors in the so-called first browser war, with its market share falling from more than 90 percent in the mid-1990s to less than 1 percent in 2006. Netscape created the JavaScript programming language, the most widely used language for client-side scripting of web pages. The company also developed SSL which was used for securing online communications before its successor TLS took over. 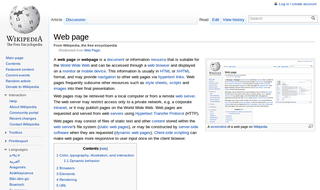 The World Wide Web (WWW), commonly known as the Web, is an information system where documents and other web resources are identified by Uniform Resource Locators, which may be interlinked by hypertext, and are accessible over the Internet. The resources of the Web are transferred via the Hypertext Transfer Protocol (HTTP) and may be accessed by users by a software application called a web browser and are published by a software application called a web server. The World Wide Web is not synonymous with the Internet, which pre-existed the Web in some form by over two decades and upon whose technologies the Web is built.

The DNS root zone is the top-level DNS zone in the hierarchical namespace of the Domain Name System (DNS) of the Internet.

Web scraping, web harvesting, or web data extraction is data scraping used for extracting data from websites. Web scraping software may access the World Wide Web directly using the Hypertext Transfer Protocol, or through a web browser. While web scraping can be done manually by a software user, the term typically refers to automated processes implemented using a bot or web crawler. It is a form of copying, in which specific data is gathered and copied from the web, typically into a central local database or spreadsheet, for later retrieval or analysis. 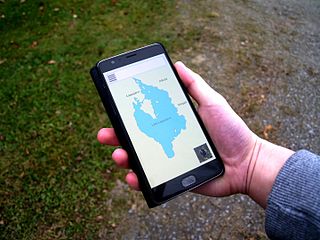 Web mapping is the process of using the maps delivered by geographic information systems (GIS) in World Wide Web. A web map on the World Wide Web is both served and consumed, thus web mapping is more than just web cartography, it is a service by which consumers may choose what the map will show. Web GIS emphasizes geodata processing aspects more involved with design aspects such as data acquisition and server software architecture such as data storage and algorithms, than it does the end-user reports themselves.

GeoNames is a user editable geographical database available and accessible through various web services, under a Creative Commons attribution license. The project was founded in late 2005.

Tor is free and open-source software for enabling anonymous communication. The name derived from the acronym for the original software project name "The Onion Router". Tor directs Internet traffic through a free, worldwide, volunteer overlay network consisting of more than seven thousand relays to conceal a user's location and usage from anyone conducting network surveillance or traffic analysis. Using Tor makes it more difficult to trace Internet activity to the user: this includes "visits to Web sites, online posts, instant messages, and other communication forms". Tor's intended use is to protect the personal privacy of its users, as well as their freedom and ability to conduct confidential communication by keeping their Internet activities unmonitored.

InciWeb is an interagency all-risk incident web information management system provided by the United States Forest Service released in 2004. It was originally developed for wildland fire emergencies, but can be also used for other emergency incidents.

Yandex Search is a web search engine which is owned by the Russian corporation Yandex. It is the core product of Yandex. In January 2015 Yandex Search generated 51.2% of all of the search traffic in Russia according to LiveInternet.

Google's changes to its privacy policy on March 1, 2012 enabled the company to share data across a wide variety of services. These embedded services include millions of third-party websites that use Adsense and Analytics. The policy was widely criticized for creating an environment that discourages Internet-innovation by making Internet users more fearful and wary of what they put online.