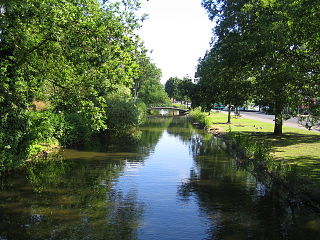 Piccotts End is a village in Hertfordshire, England situated on the upper River Gade. While often mistaken for a hamlet, it became a village when its church – All Saints – was dedicated in 1907 and remained a place of worship until the 1970s. It is in the Dacorum Ward of Gadebridge.

Dacorum Borough Council is the local authority for the Dacorum non-metropolitan district of England, the United Kingdom. Dacorum is located in the north-west of Hertfordshire, in the East of England region. The Council itself is based in Hemel Hempstead, the largest settlement in the district.

Great Gaddesden is a village and civil parish in Dacorum Hundred in Hertfordshire, England. It is located in the Chiltern Hills, north of Hemel Hempstead. The parish borders Flamstead, Hemel Hempstead, Nettleden and Little Gaddesden and also Studham in Bedfordshire.

Gadebridge House was a country house at Gadebridge in Hertfordshire.

Dacorum Heritage Trust (DHT) is a local history advocacy group in the United Kingdom. It collects and records the history of the Borough of Dacorum, Hertfordshire, in the south of England, and aims to encourage the appreciation of the heritage of Dacorum.

The Charter Tower is a Grade II* listed building in Gadebridge Park, Hemel Hempstead, Hertfordshire, England. The two-storey tower, built of ashlar, is the entranceway and all that remains of the former manor house of Sir Richard Combe, and his arms may still be seen on the tower.