The Gambier Parry process is a development of the classical technique of fresco for painting murals, named for Thomas Gambier Parry.

True fresco is the technique of painting on fresh lime plaster whereby the pigments are fixed by the carbonatation of the lime (calcium hydroxide). The technique requires no other binding medium and the fixing process produces a durable crystalline paint layer. However, only a limited range of pigments are suitable for true frescoes and the technique requires careful application under controlled conditions, and relatively low humidity thereafter. In some environments, conventional fresco colours can rapidly accumulate dirt and grime. The decoration of the new Houses of Parliament in the mid-nineteenth century saw an embarrassing failure of true fresco in England but had generated a revival in mural painting. [1]

Gambier Parry developed a spirit medium for use on a specially prepared plaster or canvas ground and in 1862 he published his recipe. Originally it used beeswax, oil of spike lavender, spirits of turpentine, elemi resin and copal varnish, and was complex both in preparing the wall surface and applying the paint. [1] With commercialisation the process was simplified and became widely known. [2]

The system was used by Frederic Leighton for The Arts of Industry as Applied to War and The Arts of Industry as Applied to Peace at the Victoria & Albert Museum (1870-72) [1] and by Ford Madox Brown on the Manchester Murals in Manchester Town Hall (1879-93). [3] One of the most complete examples of the Gambier Parry process may be seen at St Leonard's Church, Newland, Worcestershire [4] where frescoes cover the interior of the church; St Leonard's is the private chapel of the Beauchamp Almshouses.

Fresco is a technique of mural painting executed upon freshly laid, or wet lime plaster. Water is used as the vehicle for the dry-powder pigment to merge with the plaster, and with the setting of the plaster, the painting becomes an integral part of the wall. The word fresco is derived from the Italian adjective fresco meaning "fresh", and may thus be contrasted with fresco-secco or secco mural painting techniques, which are applied to dried plaster, to supplement painting in fresco. The fresco technique has been employed since antiquity and is closely associated with Italian Renaissance painting. 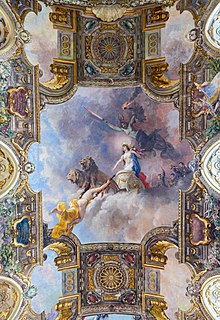 A mural is any piece of artwork painted or applied directly on a wall, ceiling or other permanent surfaces. A distinguishing characteristic of mural painting is that the architectural elements of the given space are harmoniously incorporated into the picture. 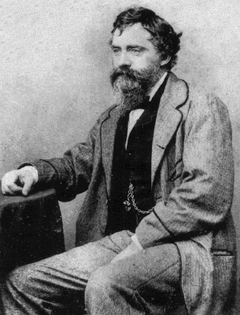 Thomas Gambier Parry, J.P., D.L., was a British artist and art collector. He is best remembered for his development of the Gambier Parry process of fresco painting, and for forming the significant collection of early Italian paintings and objects that his heirs gave to the Courtauld Institute of Art in London, where many are displayed in the Courtauld Gallery. 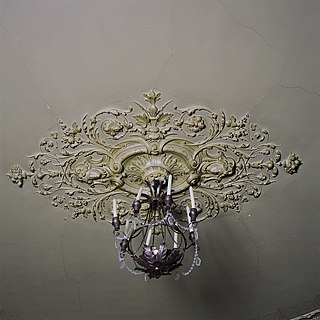 Stucco or render is a construction material made of aggregates, a binder, and water. Stucco is applied wet and hardens to a very dense solid. It is used as a decorative coating for walls and ceilings, and as a sculptural and artistic material in architecture. Stucco may be used to cover less visually appealing construction materials, such as metal, concrete, cinder block, or clay brick and adobe. 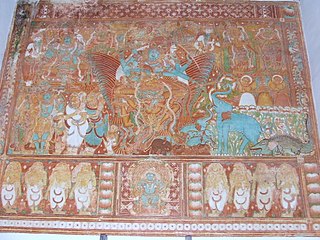 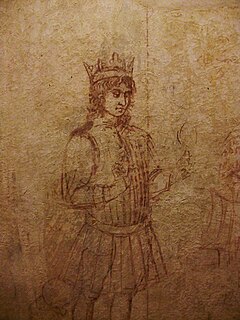 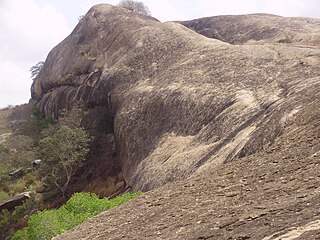 Sittanavasal Cave is a 2nd-century Jain complex of caves in Sittanavasal village in Pudukottai district of Tamil Nadu, India. Its name is a distorted form of Sit-tan-na-va-yil, a Tamil word which means "the abode of great saints". 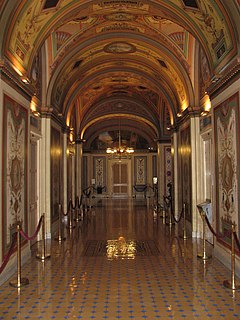 Faux painting or faux finishing are terms used to describe decorative paint finishes that replicate the appearance of materials such as marble, wood or stone. The term comes from the French word faux, meaning false, as these techniques started as a form of replicating materials such as marble and wood with paint, but has subsequently come to encompass many other decorative finishes for walls and furniture including simulating recognisable textures and surfaces.

Intonaco is an Italian term for the final, very thin layer of plaster on which a fresco is painted. The plaster is painted while still wet, in order to allow the pigment to penetrate into the intonaco itself. An earlier layer, called arriccio, is laid slightly coarsely to provide a key for the intonaco, and must be allowed to dry, usually for some days, before the final very thin layer is applied and painted on. In Italian the term intonaco is also used much more generally for normal plaster or mortar wall-coatings in buildings.

The Buon fresco, Italian for true fresh, is a fresco painting technique in which alkaline-resistant pigments, ground in water, are applied to wet plaster.

Giornata is an art term, originating from an Italian word which means "a day's work." The term is used in Buon fresco mural painting and describes how much painting can be done in a single day of work. This amount is based on the artist’s past experience of how much they can paint in the many hours available while the plaster remains wet and the pigment is able to adhere to the wall. 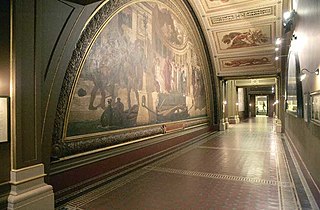 The region of Shekhawati in Rajasthan is remarkable for its wealth of mural paintings which adorn the walls of many buildings, including havelis.

Keim's process is a technique of fresco preparation and painting intended to maximize the lifetime of the finished work. The process, as reported in 1884 at the Royal Society of Arts in London, was created by chemist and craftsman Adolf Wilhelm Keim of Munich, as an improvement on the earlier stereochromy technique of Schlotthaner and Johann Nepomuk von Fuchs. 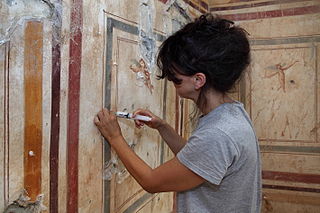 The conservation and restoration of frescoes is the process of caring for and maintaining frescos, and includes documentation, examination, research, and treatment to insure their long-term viability, when desired.

The conservation and restoration of Pompeian frescoes describes the activities, methods, and techniques that have historically and are currently being used to care for the preserved remains of the frescoes from the archeological site of Pompeii, Italy. The ancient city of Pompeii is famously known for its demise in A.D. 79 after the fatal eruption of Mount Vesuvius wiped out the population and buried the city beneath layers of compact lava material. In 1738, King Charles III or Charles of Bourbon, began explorations in Portici, Resina, Castellammare di Stabia, a Civita, where it was believed that the ancient cities of Pompeii, Stabiae, and Herculaneum were buried beneath. The first phase of the excavations at Pompeii started in 1748, which lead to the first conservation and restoration efforts of the frescoes since their burial, and in 1764, open-air excavations began at Pompeii. Pompeii has a long history of excavation and restoration that began without a strong foundation or strategy. After centuries of cronyism, recurring financial shortages, and on-again-off-again restoration, the city's frescoes and structures were left in poor condition. In 1997, Pompeii was added to the UNESCO List of World Heritage Sites.