Genetic variability is either the presence of, or the generation of, genetic differences. It is defined as "the formation of individuals differing in genotype, or the presence of genotypically different individuals, in contrast to environmentally induced differences which, as a rule, cause only temporary, nonheritable changes of the phenotype". [1] Genetic variability in a population is important for biodiversity. [2]

There are many sources of genetic variability in a population:

DNA damages are very frequent, occurring on average more than 60,000 times a day per cell in humans due to metabolic or hydrolytic processes as summarized in DNA damage (naturally occurring). Most DNA damages are accurately repaired by various DNA repair mechanisms. However, some DNA damages remain and give rise to mutations.

It appears that most spontaneously arising mutations result from error prone replication (trans-lesion synthesis) past a DNA damage in the template strand. For example, in yeast more than 60% of spontaneous single-base pair substitutions and deletions are likely caused by translesion synthesis. [6] Another significant source of mutation is an inaccurate DNA repair process, non-homologous end joining, that is often employed in repair of DNA double-strand breaks. [7] (Also see Mutation.) Thus it seems that DNA damages are the underlying cause of most spontaneous mutations, either because of error-prone replication past damages or error-prone repair of damages.

There are many sources that decrease genetic variability in a population: 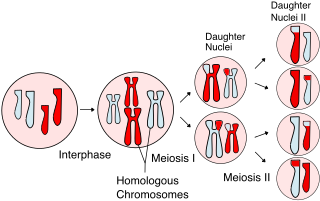 Meiosis is a special type of cell division in sexually-reproducing organisms used to produce the gametes, such as sperm or egg cells. It involves two rounds of division that ultimately result in four cells with only one copy of each chromosome (haploid). Additionally, prior to the division, genetic material from the paternal and maternal copies of each chromosome is crossed over, creating new combinations of code on each chromosome. Later on, during fertilisation, the haploid cells produced by meiosis from a male and female will fuse to create a cell with two copies of each chromosome again, the zygote.

In biology, a mutation is an alteration in the nucleotide sequence of the genome of an organism, virus, or extrachromosomal DNA. Viral genomes contain either DNA or RNA. Mutations result from errors during DNA or viral replication, mitosis, or meiosis or other types of damage to DNA, which then may undergo error-prone repair, cause an error during other forms of repair, or cause an error during replication. Mutations may also result from insertion or deletion of segments of DNA due to mobile genetic elements. 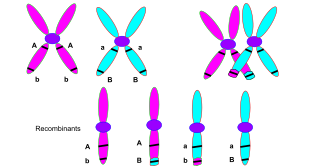 Chromosomal crossover, or crossing over, is the exchange of genetic material during sexual reproduction between two homologous chromosomes' non-sister chromatids that results in recombinant chromosomes. It is one of the final phases of genetic recombination, which occurs in the pachytene stage of prophase I of meiosis during a process called synapsis. Synapsis begins before the synaptonemal complex develops and is not completed until near the end of prophase I. Crossover usually occurs when matching regions on matching chromosomes break and then reconnect to the other chromosome. 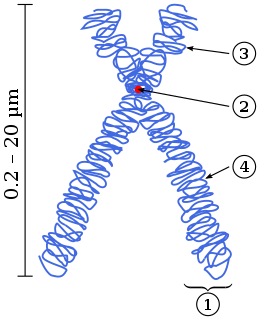 A chromatid is a chromosome that has been newly copied or the copy of such a chromosome, the two of them still joined to the original chromosome by a single centromere.

A couple of homologous chromosomes, or homologs, are a set of one maternal and one paternal chromosome that pair up with each other inside a cell during fertilization. Homologs have the same genes in the same loci where they provide points along each chromosome which enable a pair of chromosomes to align correctly with each other before separating during meiosis. This is the basis for Mendelian inheritance which characterizes inheritance patterns of genetic material from an organism to its offspring parent developmental cell at the given time and area. 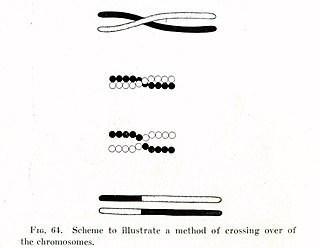 In evolutionary genetics, Muller's ratchet is a process in which absence of recombination, especially in an asexual population, results in accumulation of deleterious mutations in an irreversible manner. This happens due to the fact that in the absence of recombination, offspring at least bear the same mutational load as their parents. Muller proposed this mechanism as one reason why sexual reproduction may be favored over asexual reproduction, as sexual organisms benefit from recombination. The negative effect of accumulating irreversible deleterious mutations may not be prevalent in organisms, which, while they reproduce asexually, also undergo other forms of recombination. This effect has also been observed in those regions of the genomes of sexual organisms that do not undergo recombination.

Genetic variation is the difference in DNA among individuals. There are multiple sources of genetic variation, including mutation and genetic recombination.

In biology and genetics, the germline is the population of a multicellular organism's cells that pass on their genetic material to the progeny (offspring). In other words, they are the cells that form the egg, sperm and the fertilised egg, as well as the fertilised egg's future sperm or egg cells. They are usually differentiated to perform this function and segregated in a specific place away from other bodily cells.

Gene duplication is a major mechanism through which new genetic material is generated during molecular evolution. It can be defined as any duplication of a region of DNA that contains a gene. Gene duplications can arise as products of several types of errors in DNA replication and repair machinery as well as through fortuitous capture by selfish genetic elements. Common sources of gene duplications include ectopic recombination, retrotransposition event, aneuploidy, polyploidy, and replication slippage.

The evolution of sexual reproduction is an adaptive feature which is common to almost all multi-cellular organisms with many being incapable of reproducing asexually. Prior to the advent of sexual reproduction, the adaptation process whereby genes would change from one generation to the next happened very slowly and randomly. Sex evolved as an extremely efficient mechanism for producing variation, and this had the major advantage of enabling organisms to adapt to changing environments. Sex did, however, come with a cost. In reproducing asexually, no time nor energy needs to be expended in choosing a mate. And if the environment has not changed, then there may be little reason for variation, as the organism may already be well adapted. Sex, however, has evolved as the most prolific means of species branching into the tree of life. Diversification into the phylogenetic tree happens much more rapidly via sexual reproduction than it does by way of asexual reproduction.

Nuclear DNA(nDNA), or nuclear deoxyribonucleic acid, is the DNA contained within each cell nucleus of a eukaryotic organism. Nuclear DNA encodes for the majority of the genome in eukaryotes, with mitochondrial DNA and plastid DNA coding for the rest. Nuclear DNA adheres to Mendelian inheritance, with information coming from two parents, one male and one female, rather than matrilineally as in mitochondrial DNA. 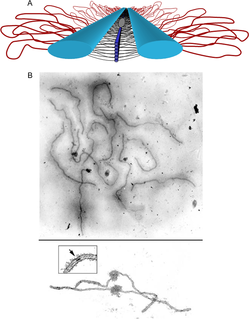 The synaptonemal complex (SC) is a protein structure that forms between homologous chromosomes during meiosis and is thought to mediate synapsis and recombination during meiosis I in eukaryotes. It is currently thought that the SC functions primarily as a scaffold to allow interacting chromatids to complete their crossover activities. 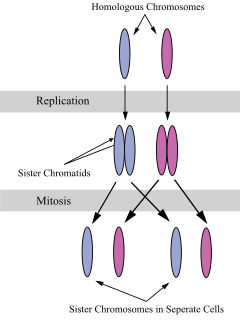 This glossary of genetics is a list of definitions of terms and concepts commonly used in the study of genetics and related disciplines in biology, including molecular biology and evolutionary biology. It is intended as introductory material for novices; for more specific and technical detail, see the article corresponding to each term. For related terms, see Glossary of evolutionary biology.

The origin and function of meiosis are currently not well understood scientifically, and would provide fundamental insight into the evolution of sexual reproduction in eukaryotes. There is no current consensus among biologists on the questions of how sex in eukaryotes arose in evolution, what basic function sexual reproduction serves, and why it is maintained, given the basic two-fold cost of sex. It is clear that it evolved over 1.2 billion years ago, and that almost all species which are descendants of the original sexually reproducing species are still sexual reproducers, including plants, fungi, and animals.