The Giro del Capo was a road cycling stage race held in the vicinity of Cape Town, South Africa. The 2009 edition was held in the form of four challenges. [1] The last edition, held in 2010, was ranked as 2.2 by the UCI and was part of the UCI Africa Tour. [2]

Cadel Lee Evans is an Australian former professional racing cyclist who finished in the Top 10 of eleven Grand Tours and won the 2011 Tour de France. Early in his career, he was a champion mountain biker, winning the World Cup in 1998 and 1999 and placing seventh in the men's cross-country mountain bike race at the 2000 Summer Olympics in Sydney. Evans is a four time Olympian. 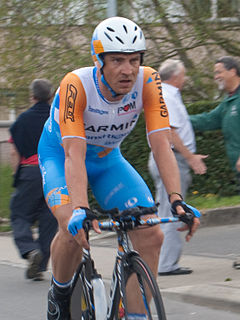 The Tour of the Alps is an annual professional cycling stage race in Italy and Austria. First held in 1962, it was named Giro del Trentino until 2016, and run over four stages in the Trentino-Alto Adige/Südtirol region of Italy. In 2015, the race merged with the nearby one-day race Trofeo Melinda, and the 2015 edition was called the Giro del Trentino Melinda. 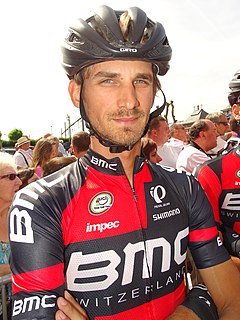 Peter Velits is a retired Slovak professional road racing cyclist. His career highlights include third place overall and a stage win at the 2010 Vuelta a España, the 2007 World Under-23 Road Race Championships gold and the 2012 Tour of Oman overall victory. Velits is also known as strong time-trialist, winning three consecutive team time trials as a part of Omega Pharma–Quick-Step in 2012 and 2013 and riding on the BMC Racing Team in 2014 UCI Road World Championships. His twin brother, Martin Velits rides for Etixx–Quick-Step, having raced on the same teams every year until the end of the 2013 season. 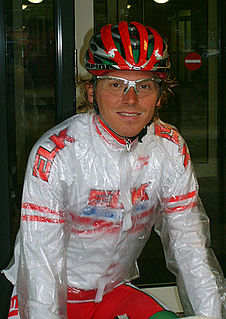 Christian Pfannberger is an Austrian former professional road racing cyclist. He was a two-time Austrian national road-race champion. Other achievements included winning the U23 National Championship in 2001 and the Giro del Capo, a stage race in South Africa in 2008. In spring 2008 he had top 10 finishes in all three of the Ardennes classics. Pfannberger was handed a lifetime ban by the Austrian National Anti-Doping Agency for his second doping violation.

The 2010 Giro d'Italia was the 93rd edition of the Giro d'Italia, one of cycling's Grand Tours. The Giro started off in Amsterdam on 8 May and stayed in the Netherlands for three stages, before leaving the country. The route included climbs such as Monte Zoncolan, Plan de Corones, the Passo del Mortirolo and the Passo di Gavia before ending in Verona with an individual time trial. 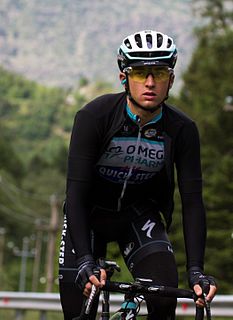 Gianluca Brambilla is an Italian professional road bicycle racer, who currently rides for UCI WorldTeam Trek–Segafredo. He started his professional career in 2010 with Colnago–CSF Inox.

Damiano Caruso is an Italian professional road bicycle racer, who currently rides for UCI WorldTeam Bahrain–McLaren. Caruso was also the 2008 under-23 Italian national champion for the road race. 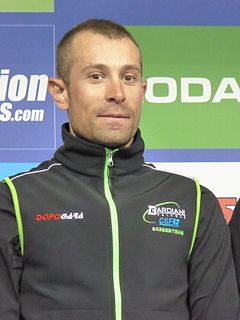 Nicola Ruffoni is an Italian racing cyclist, currently suspended from the sport due to a positive doping test.

Team Konica Minolta–Bizhub was a South African cycling team that participated in the UCI Continental Circuits, primarily in the UCI Africa Tour, from 2005 until the end of the 2009 season. The team's main sponsor was Japanese technology company Konica Minolta. Notable former riders include four-time Tour de France winner Chris Froome, who rode for the team in 2007.