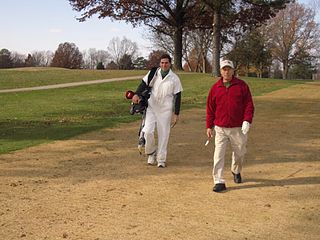 In golf, a caddie is the person who carries a player's bag and clubs, and gives the player advice and moral support. 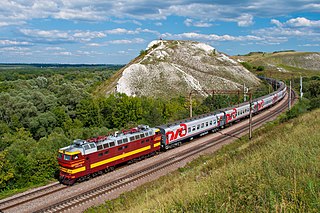 A train is a form of rail transport consisting of a series of connected vehicles that generally run along a railroad track to transport passengers or cargo. The word train comes from the Old French trahiner, derived from the Latin trahere meaning 'to pull, to draw'. 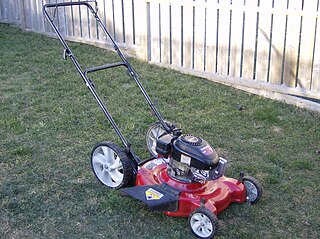 A lawn mower is a machine utilizing one or more revolving blades to cut a grass surface to an even height. The height of the cut grass may be fixed by the design of the mower, but generally is adjustable by the operator, typically by a single master lever, or by a lever or nut and bolt on each of the machine's wheels. The blades may be powered by manual force, with wheels mechanically connected to the cutting blades so that when the mower is pushed forward, the blades spin or the machine may have a battery-powered or plug-in electric motor. The most common self-contained power source for lawn mowers is a small internal combustion engine. Smaller mowers often lack any form of propulsion, requiring human power to move over a surface; "walk-behind" mowers are self-propelled, requiring a human only to walk behind and guide them. Larger lawn mowers are usually either self-propelled "walk-behind" types or more often, are "ride-on" mowers, equipped so the operator can ride on the mower and control it. A robotic lawn mower is designed to operate either entirely on its own or less commonly by an operator by remote control. 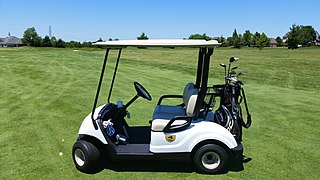 A golf cart or golf buggy is a small vehicle designed originally to carry two golfers and their golf clubs around a golf course or on desert trails with less effort than walking. 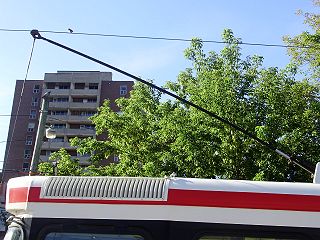 A mobility scooter is an electric vehicle and mobility aid equivalent or auxiliary to a power wheelchair but configured like a motorscooter. When motorized they are commonly referred to as a power-operated vehicle/scooter, handicap scooters, or electric scooter as well. Non-motorized mobility scooters are less common, but are intended for the estimated 60% of wheelchair users who have at least some use of their legs.

A jack is a mechanical lifting device used to apply great forces or lift heavy loads. A mechanical jack employs a screw thread for lifting heavy equipment. A hydraulic jack uses hydraulic power. The most common form is a car jack, floor jack or garage jack, which lifts vehicles so that maintenance can be performed. Jacks are usually rated for a maximum lifting capacity. Industrial jacks can be rated for many tons of load. 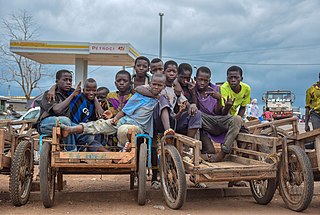 Baggage carts, luggage carts, luggage trolleys or trolleys are small vehicles pushed by travelers (human-powered) to carry individual luggage, mostly suitcases. There are two major sizes: One for big luggage and one for small luggage. Carts have usually two parts for carrying luggage: A small section (basket) for carry on luggage at the same level as the handle, and a lowered large section for suitcases a small and large bags.

PowaKaddy or PowaKaddy International Limited is a golf equipment manufacturing company based in Sittingbourne, Kent, Great Britain that specialises in electric golf trolleys.

Material handling equipment (MHE) is mechanical equipment used for the movement, storage, control, and protection of materials, goods and products throughout the process of manufacturing, distribution, consumption, and disposal. The different types of handling equipment can be classified into four major categories: transport equipment, positioning equipment, unit load formation equipment, and storage equipment. 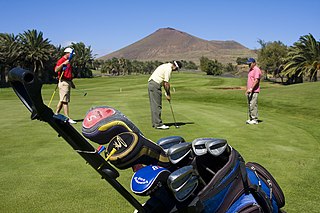 Golf equipment encompasses the various items that are used to play the sport of golf. Types of equipment include the golf ball, golf clubs, and devices that aid in the sport.

Melex is an electric vehicle produced by a company of the same name in Mielec, Poland. It has been in production since 1971.

A mail satchel is a type of mail bag that a letter carrier uses over-the-shoulder for assisting the delivery of personal mail on a designated route.