Glauber de Andrade Rocha, better known as Glauber Rocha, was a Brazilian film director, actor and screenwriter. He was a key figure of Cinema Novo and one of the most influential moviemakers of Brazilian cinema. His films Black God, White Devil and Entranced Earth are often considered to be two of the greatest achievements in Brazilian cinematic history, being selected by Abraccine as, respectively, the second and fifth best Brazilian films of all-time. 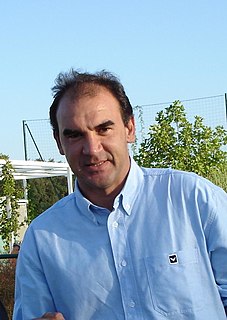 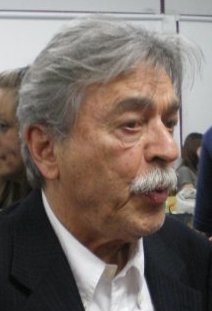 Mauro Geraldo Galvão is a Brazilian retired footballer who played as a sweeper,having won the title of Brazilian Champion four times, playing for Internacional (1979), Grêmio Portoalegrense (1996) and Vasco da Gama, along a span of 21 years; won the Libertadores Cup in 1998 and lost the finals of the 1999 Intercontinental Cup and of the 2000 FIFA Club World Championship.

Carlos Alberto is a common Portuguese and Spanish given name.

Joaquim is the Portuguese and Catalan version of Joachim and may refer to:

Brazil sent a delegation to compete at the 2008 Summer Paralympics in Beijing, China The country debuted in the Games in 1972 and 2008 was its 10th participation.

Francielle Gomes da Rocha, is a Brazilian handball player. She plays for the Brazilian club Esporte Clube Pinheiros and is also a member of the Brazil women's national handball team.

Tiago Henrique Gomes da Rocha is a Brazilian former security guard who has claimed to have killed 39 people. He approached his victims on a motorbike and shouted "robbery" before shooting them. However, he never took anything. He targeted homeless people, women and homosexuals in Goiás. His youngest victim was a 14-year-old girl killed in January 2014 and 16 of his victims were women. Gomes da Rocha was arrested after being caught riding a motorbike with a fake plate. He earlier caught the attention of police after they discovered that he was facing trial for stealing the number plate off a motorbike at a supermarket in Goiania in January 2014. A motorbike, stolen plates and the suspected murder weapon, a .38 revolver, were retrieved from a home he shared with his mother. He attempted suicide in his prison cell on 16 October 2014 by slashing his wrists with a smashed light bulb. Gomes da Rocha has claimed to have gained murderous urges after being sexually abused by his neighbor at age 11.

Francisco Gomes da Rocha (1745–1808) was a Brazilian composer. He was the successor of Emerico Lobo de Mesquita in Vila Rica.

The following is a chronological list of Brazilian classical composers:

Francisco Gomes is a Portuguese name which may refer to:

Batillipes is genus of tardigrades, the only genus in the family Batillipedidae. It was first described by Ferdinand Richters in 1909.

O Sétimo Guardião is a Brazilian telenovela produced and broadcast by Rede Globo. It premiered on 12 November 2018, replacing Segundo Sol, and ended on 17 May 2019, replaced by A Dona do Pedaço. It is created by Aguinaldo Silva and directed by Rogério Gomes.