This article uses a Portuguese surname: his surname is Gomes da Rocha, not Rocha.

Tiago Henrique Gomes da Rocha (born 4 February 1988) is a Brazilian former security guard and serial killer who has claimed to have killed 39 people. [1] He approached his victims on a motorbike and shouted "robbery" before shooting them. [2] However, he never took anything. [1] He targeted homeless people, women and homosexuals in Goiás. [1] [3] His youngest victim was a 14-year-old girl killed in January 2014 and 16 of his victims were women. [3] Gomes da Rocha was arrested after being caught riding a motorbike with a fake plate. He earlier caught the attention of police after they discovered that he was facing trial for stealing the number plate off a motorbike at a supermarket in Goiania in January 2014. A motorbike, stolen plates and the suspected murder weapon, a .38 revolver, were retrieved from a home he shared with his mother. [3] He attempted suicide in his prison cell on 16 October 2014 by slashing his wrists with a smashed light bulb. [4] [2] Gomes da Rocha has claimed to have gained murderous urges after being sexually abused by his neighbor at age 11. [5]

Anápolis is a Brazilian municipality of the State of Goiás. It is located between two capitals, the federal capital Brasília and state capital Goiânia. It is the third most populous city in the state, with 391,772 inhabitants according to an estimate by the Brazilian Institute of Geographic and Statistics in 2020. It is an important industrial and logistics center in the Brazilian Central-West. Its GDP is R$ 10 billion, approximately US$4.4 billion, which makes it the second largest in the state. The city became an industrial power after the implementation of its Industrial District in 1970.

Goiás is a Brazilian state located in the Center-West region. Goiás borders the Federal District and the states of Tocantins, Bahia, Minas Gerais, Mato Grosso do Sul and Mato Grosso. The state capital is Goiânia. With 7.2 million inhabitants, Goiás is the most populous state in the Center-West and the 11th most populous in the country. It has the ninth largest economy among Brazilian federative units. In Brazil's geoeconomic division, Goiás belongs to the Centro-Sul (Center-South), being the northernmost state of the southern portion of Brazil. The state has 3.3% of the Brazilian population and is responsible for 2.7% of the Brazilian GDP. 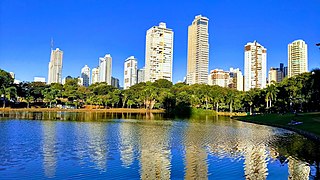 Goiânia is the capital and largest city of the Brazilian state of Goiás. With a population of 1,536,097, it is the second-largest city in the Central-West Region and the 10th-largest in the country. Its metropolitan area has a population of 2,654,860, making it the 12th-largest in Brazil. With an area of approximately 739 square kilometres, it has a continuous geography with few hills and lowlands, with flat lands in most of its territory, especially the Meia Ponte River, in addition to Botafogo and Capim Puba streams.

Tiago is a given and a family name, being one of the Portuguese equivalents of the names Jacob and James. Its archaic spelling, used mostly in Brazil, is Thiago.

Delúbio Soaresde Castro is a Brazilian trade unionist who has had a long professional association with the Brazilian Workers Party (PT). He is particularly noted for his involvement in the mensalão scandal.

João Hélio Fernandes Vieites was a six-year-old Brazilian boy who was murdered on February 7, 2007 by being dragged from a car for 7 km after an armed carjacking by a group of young males in Oswaldo Cruz, Rio de Janeiro. The callous and brutal manner in which João Hélio was murdered shocked the Brazilian public and received substantial coverage in Rio's media and throughout Brazil. The murder sparked a number of public protests demanding concrete solutions to the extreme violence plaguing the city, amendments to the constitution and penal code to increase the punishment for brutal crimes, and greater accountability placed upon adolescents who commit murder.

Paulo de Siqueira Garcia was a Brazilian neurosurgeon, physician and politician from the Workers' Party. He was the mayor of Goiânia from 1 April 2010, when then-mayor Iris Rezende resigned in order to run for Governor at the 2010 election, until his death. 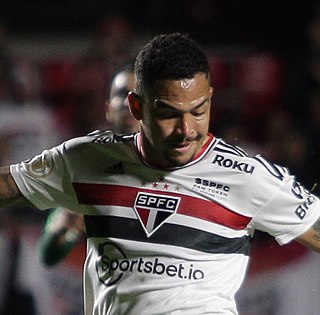 Luciano da Rocha Neves, simply known as Luciano, is a Brazilian professional footballer who plays as a forward for São Paulo FC. 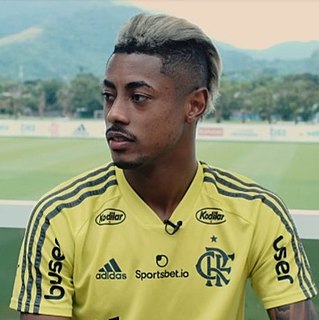 Bruno Henrique Pinto, known as Bruno Henrique, is a Brazilian footballer who plays as a forward for Flamengo and the Brazil national team. 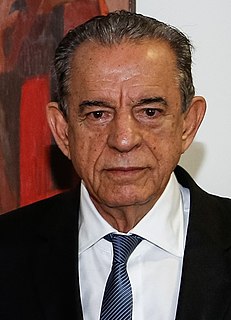 Iris Rezende Machado was a Brazilian politician who was a member of the Brazilian Democratic Movement (MDB).

José Paz Bezerra, known as The Monster of Morumbi, is a Brazilian serial killer who was convicted of killing of at least seven women in São Paulo and Pará from 1970 to 1971, but claimed he was responsible for 24 murders overall. Sentenced to 100 years imprisonment, he was sent to the São José Prison in Belém, where he served 30 years before being released in 2001. 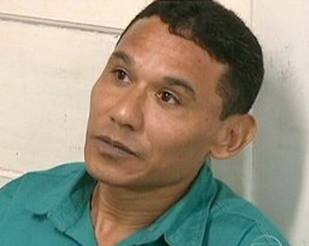 Francisco das Chagas Rodrigues de Brito is a Brazilian former miner and informal mechanic condemned by the courts as responsible for several homicides against children in the state of Maranhão, maintaining the abuse of the corpse and emasculation of the victims in common. Scientific evidence proved him as the perpetrator of the crimes when experts found several bodies in his residence, as well as limbs and fragments of children who had disappeared. Evidence points him as the real person responsible for the series of crimes of the same modus operandi that occurred in the municipality of Altamira, in Pará, since the accused lived in the region for more than 10 years. Francisco das Chagas Rodrigues de Brito is considered the most prolific serial killer in the country.

Roneys Fon Firmino Gomes, known as the Tower Maniac, is a Brazilian serial killer who, after killing his victims, left their bodies underneath high-voltage electrical towers.

Sebastião Antônio de Oliveira, known as The Monster of Bragança, was a Brazilian rapist and serial killer who committed at least eight rapes and five murders in the Bragança region in two periods: between 1953 and 1963, and between 1974 and 1975, when he was arrested. This case shocked the 1970s society in Bragança Paulista.

Paulo José Lisboa, known as The Chain Maniac, was a Brazilian serial killer who was convicted of killing eleven prostitutes in São Paulo and Espírito Santo from 1980 to 2000, with the latter killings occurring while he was a fugitive.

Douglas Baptista, known as The São Vicente Maniac, is a Brazilian serial killer who drowned at least eight children in the Baixada Santista metropolitan area from 1992 to 2003. Arrested and convicted for several of the crimes, he is currently serving a lengthy sentence.