Last updated May 12, 2020
This article is about the conquistador and co-founder of San Salvador. For his cousin, see Gonzalo de Alvarado y Chávez.

Gonzalo de Alvarado was a native of Badajoz and son of Diego Gómez de Alvarado y Mexía de Sandoval, born in Badajoz in 1460 and vecino of Badajoz, Extremadura, Commander of Lobón, [1] Puebla, Montijo and Cubillana, Alcalde of Montánchez, Trece of the Order of Santiago, Lord of Castellanos, Maestresala of Henry IV of Castile and General of the Frontier of Portugal, widow of Teresa Suárez de Moscoso y Figueroa, and second wife Leonor de Contreras y Gutiérrez de Trejo.

When Pedro de Alvarado was wounded on his left thigh and handicapped for the rest of his life he abandoned the war and appointed his brother, Gonzalo de Alvarado, to continue the task. In 1525 the conquest of El Salvador was completed and the city of San Salvador was established.

Diego de Almagro, also known as El Adelantado and El Viejo, was a Spanish conquistador known for his exploits in western South America. He participated with Francisco Pizarro in the Spanish conquest of Peru. While subduing the Inca Empire he laid the foundation for Quito and Trujillo as Spanish cities in present-day Ecuador and Peru respectively. From Peru Almagro led an expedition that made him the second European to set foot in central Chile. Back in Peru, a longstanding conflict with Pizarro over the control of the former Inca capital of Cuzco erupted into a civil war between the two bands of conquistadores. In the battle of Las Salinas in 1538 Almagro was defeated by the Pizarro brothers and months later he was executed. 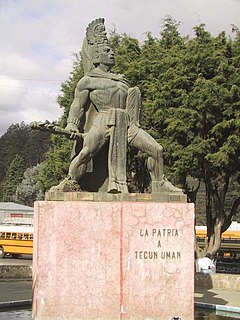 Tecun Uman was one of the last rulers of the K'iche' Maya people, in the Highlands of what is now Guatemala. According to the Kaqchikel annals, he was slain by Spanish conquistador Pedro de Alvarado while waging battle against the Spanish and their allies on the approach to Quetzaltenango on 12 February 1524. Tecun Uman was declared Guatemala's official national hero on March 22, 1960 and is commemorated on February 20, the popular anniversary of his death. Tecun Uman has inspired a wide variety of activities ranging from the production of statues and poetry to the retelling of the legend in the form of folkloric dances to prayers. Despite this, Tecun Uman's existence is not well documented, and it has proven to be difficult to separate the man from the legend.

Tlaxcala was a pre-Columbian city and state in central Mexico.

Kaybʼil Bʼalam was a 16th-century leader of the Mam people in the Maya kingdom in the western highlands of Guatemala. During the time of the Spanish invasion, the Mam population was mainly situated in Xinabahul. However, due to the Spanish conquest, the people returned to the stone fortifications of Zaculeu for protection.

Juan Vázquez de Coronado y Anaya was a Spanish conquistador, remembered especially for his role in the colonization of Costa Rica, in Central America, where he gained a reputation for fairness, effective administration, and good relationships with the native population. He was a nephew of Francisco Vázquez de Coronado y Luján, who explored the southwestern United States between 1540 and 1542.

Gonzalo de Alvarado y Chávez was a Spanish conquistador and cousin of Pedro de Alvarado and accompanied him on his first campaign in Guatemala. In 1525 he was appointed chief constable of Santiago de los Caballeros de Guatemala, the new capital. He married Isabel, a daughter of Jorge de Alvarado, his cousin. It is not known when he died.

Diego de Holguín, 1486 -?, was a Spanish conquistador and the first mayor of San Salvador, in April 1525. He had remarkable activity in the conquest of many nations in the Caribbean islands, Central America and Mexico, where he became famous for his courage. 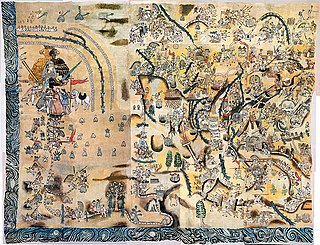 The Lienzo de Quauhquechollan is a 16th-century lienzo of the Nahua, a group of indigenous peoples of Mexico. It is one of two surviving Nahua pictorial records recounting the Spanish conquest of Guatemala and the earliest surviving maps of what is now Guatemala.

Alvarado was the Spanish family of conquistadors.

Pedro de Portocarrero was a Spanish conquistador who was active in the early 16th century in Guatemala, and Chiapas in southern Mexico. He was one of the few Spanish noblemen that took part in the early stages of the Spanish conquest of the Americas, and was distantly related to prominent conquistador Pedro de Alvarado, who appointed him as an official in early colonial Guatemala. 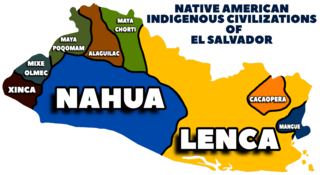