Gornji Vrhovci is a village in Croatia.

Andradas is a Brazilian municipality in the state of Minas Gerais. As of 2004 its population is estimated to be 45,323.It is known as "Land of Wine", thanks to Italian immigrants who brought viticulture to the city.It is also known for extreme sports like paragliding, hang-gliding, parachute, and more. Every year athletes from all over the world go to city practice their sport. 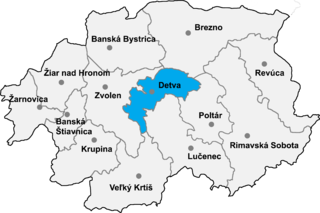 Stará Huta is a village and municipality in Detva District, in the Banská Bystrica Region of central Slovakia.

Tsapatagh, is a small resort-village in the Gegharkunik Province of Armenia, on the south-eastern shore of Lake Sevan.

Zamczysk is a village in the administrative district of Gmina Sokółka, within Sokółka County, Podlaskie Voivodeship, in north-eastern Poland, close to the border with Belarus.

Mandılı is a village in the Fizuli Rayon of Azerbaijan.

Dąbrowa is a village in the administrative district of Gmina Siennica, within Mińsk County, Masovian Voivodeship, in east-central Poland.

Windyki is a village in the administrative district of Gmina Wieczfnia Kościelna, within Mława County, Masovian Voivodeship, in east-central Poland.

Chyrzyno is a settlement in the administrative district of Gmina Górzyca, within Słubice County, Lubusz Voivodeship, in western Poland, close to the German border. It lies approximately 9 kilometres (6 mi) north of Górzyca, 25 km (16 mi) north of Słubice, and 45 km (28 mi) south-west of Gorzów Wielkopolski.

Golina is a settlement in the administrative district of Gmina Drawsko Pomorskie, within Drawsko County, West Pomeranian Voivodeship, in north-western Poland. It lies approximately 5 kilometres (3 mi) north-west of Drawsko Pomorskie and 80 km (50 mi) east of the regional capital Szczecin.

Gombe, is a small town in Wakiso District in the Central Region of Uganda.

Miranda do Norte is a municipality in the state of Maranhão in the Northeast region of Brazil.

Pedra Preta is a municipality in the state of Mato Grosso in the Central-West Region of Brazil.

Petrakovo Brdo is a village in Croatia. It is connected by the D3 highway.

Vedro Polje is a village in Croatia. It is connected by the D224 highway.

Lilbi is a village in Saaremaa Parish, Saare County in western Estonia.

Pähkla is a village in Saaremaa Parish, Saare County in western Estonia.

Pingzhou station is a station on Line 1 of the Shenzhen Metro in Shenzhen, Guangdong Province, China. The station opened on 15 June 2011.

Lingzhi station is a Metro station of Shenzhen Metro Line 5. It opened on 22 June 2011. This station is an underground station. Its Chinese name may have come from 灵芝.

Post Oak is an unincorporated community in Johnson County, in the U.S. state of Missouri.