The Grand Prix Criquielion is a European single day cycle race held each year in and around the Belgian village of Deux-Acren. The race was first organized in 1991 in honour of Claude Criquielion, who had announced his retirement that same year and was also the first winner of the race. The race is organized as a 1.2 event on the UCI Europe Tour.

Hamish Robert Haynes is an English road racing cyclist. He was British champion in 2006.

The 1988 UCI Road World Championships took place in Ronse, Belgium. As this was an Olympic year all the Olympic cycling events served as World Championships, leaving just the Professional road race and the Women's Team Time Trial to be contested. The men's road race was decided in a sprint involving three riders, Maurizio Fondriest, Claude Criquielion and Steve Bauer. 200 meters from the uphill finish, Bauer began the sprint and Fondriest was unable to respond. However Criquielion accelerated to the right of Bauer, close to the barriers. Bauer saw him coming with a much greater speed and closed the gap, which resulted in pushing Criquielion into the barriers. Bauer was also hampered by his manoeuvre and lost much speed, making it easy for Fondriest to ride past and claim the world title. Criquelion's bike was damaged too much to cycle again and he was passed by the pursuing group while walking to the finish line. Bauer finished second but was immediately disqualified after the race. 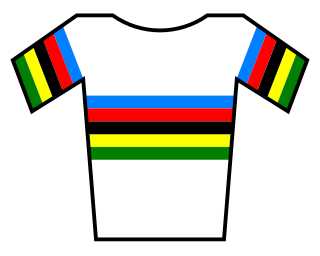 Roy Jans is a Belgian cyclist, who currently rides for UCI ProTeam Alpecin–Fenix.

The 71st running of the Tour of Flanders cycling race was held on 5 April 1987. It was won by Claude Criquielion after a 10 km solo breakaway. 88 of 233 starters finished the race. 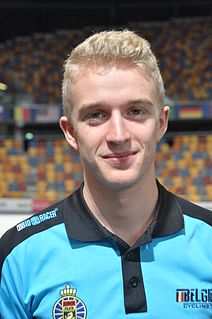 The 1980 Critérium du Dauphiné Libéré was the 32nd edition of the cycle race and was held from 26 May to 2 June 1980. The race started in Évian-les-Bains and finished at Mont Revard. The race was won by Johan van der Velde of the TI–Raleigh team.

The men's road race at the 1984 UCI Road World Championships was the 51st edition of the event. The race took place on Sunday 2 September 1984 in Barcelona, Spain. The race was won by Claude Criquielion of Belgium.

The 1982 Brabantse Pijl was the 22nd edition of the Brabantse Pijl cycle race and was held on 28 March 1982. The race started in Sint-Genesius-Rode and finished in Alsemberg. The race was won by Claude Criquielion.