Grove Art Online is the online edition of The Dictionary of Art, often referred to as the Grove Dictionary of Art, and part of Oxford Art Online, an internet gateway to online art reference publications of Oxford University Press, which also includes the online version of the Benezit Dictionary of Artists . [1] It is a large encyclopedia of art, previously a 34-volume printed encyclopedia first published by Grove in 1996 and reprinted with minor corrections in 1998. A new edition was published in 2003 by Oxford University Press.

Written by 6,700 experts from around the world, its 32,600 pages cover over 45,000 topics about art, artists, art critics, art collectors, or anything else connected to the world of art. According to The New York Times Book Review it is the "most ambitious art-publishing venture of the late 20th century". [2] Almost half the content covers non-Western subjects, and contributors hail from 120 countries. Topics range from Julia Margaret Cameron to Shoji Hamada, Korea to Timbuktu, the Enlightenment to Marxism, and Yoruba masks to Abstract Expressionism. Entries include bibliographies and a vast number of images.

The dictionary is still available in a standard hardcover edition, though the leather-bound version appears to be out of print.

The Grove Dictionary of Art is published by Oxford University Press, who acquired it from Macmillan Publishers in 2003.

The Dictionary of Art was first offered online on 12 November 1998 by Grove Dictionaries (New York) under the title The Grove Dictionary of Art Online. [3] [4] The online version is now published by Oxford University Press, is updated three times a year, is available by subscription and includes some extra content. In the UK, many public libraries offer it free to their online users using their library membership number and a PIN to log in. An umbrella site, Oxford Art Online, also includes the Benezit Dictionary of Artists and other art reference works: The Oxford Companion to Western Art, the Encyclopedia of Aesthetics , and The Concise Oxford Dictionary of Art Terms. [5]

The Encyclopædia Britannica is a general knowledge English-language encyclopaedia which is now published exclusively as an online encyclopaedia. It was formerly published by Encyclopædia Britannica, Inc., and other publishers. It was written by about 100 full-time editors and more than 4,000 contributors. The 2010 version of the 15th edition, which spans 32 volumes and 32,640 pages, was the last printed edition.

The Oxford Classical Dictionary (OCD) is generally considered "the best one-volume dictionary on antiquity," an encyclopedic work in English consisting of articles relating to classical antiquity and its civilizations. It was first published in 1949, edited by Max Cary with the assistance of H. J. Rose, H. P. Harvey, and Alexander Souter. A second edition followed in 1970 (OCD2), edited by Nicholas G. L. Hammond and H. H. Scullard, and a third edition in 1996 (OCD3), edited by Simon Hornblower and Antony Spawforth. A revised third edition was released in 2003, which is nearly identical to the previous third edition. A fourth edition was published in 2012 (OCD4), edited by Simon Hornblower, Antony Spawforth, and Esther Eidinow. In 2016, a fully digital edition launched online, edited by Sander Goldberg (2013–2017) and Tim Whitmarsh (2018–present). Continuously updated on a monthly basis, this edition incorporates all 6,300 entries from OCD4 as well as newly commissioned entries, and features multimedia content and freely accessible maps of the ancient world.

Hart's Rules for Compositors and Readers at the University Press, Oxford—today published under the short title New Hart's Rules—is an authoritative reference book and style guide published in England by Oxford University Press (OUP). Hart's Rules originated as a compilation of best practices and standards by English printer and biographer Horace Hart over almost three decades during his employment at other printing establishments, but they were first printed as a single broadsheet page for in-house use by the OUP in 1893 while Hart's job was controller of the university press. They were originally intended as a concise style guide for the staff of the OUP, but they developed continuously over the years, were published in 1904, and soon gained wider use as a source for authoritative instructions on typesetting style, grammar, punctuation, and usage.

Lexico is a website that provides a collection of dictionaries of English and Spanish produced by Oxford University Press (OUP), the publishing house of the University of Oxford. While the dictionaries on Lexico are made solely by OUP, the website is owned by Dictionary.com, whose eponymous website hosts dictionaries by other publishers such as Random House.

The Benezit Dictionary of Artists is an extensive publication of bibliographical information on painters, sculptors, designers and engravers created primarily for art museums, auction houses, historians and dealers. It was published by Éditions Gründ in Paris but has been sold to Oxford University Press.

Répertoire International de Littérature Musicale, commonly known by its acronym RILM, is a nonprofit organization that offers digital collections and advanced tools for locating research on all topics related to music. Its mission is “to make this knowledge accessible to research and performance communities worldwide….to include the music scholarship of all countries, in all languages, and across all disciplinary and cultural boundaries, thereby fostering research in the arts, humanities, sciences, and social sciences.” Central to RILM's work and mission is the international bibliography of scholarship relating to all facets of music research.

Microsoft Encarta was a digital multimedia encyclopedia published by Microsoft Corporation from 1993 to 2009. Originally sold on CD-ROM or DVD, it was also available on the World Wide Web via an annual subscription, although later articles could also be viewed for free online with advertisements. By 2008, the complete English version, Encarta Premium, consisted of more than 62,000 articles, numerous photos and illustrations, music clips, videos, interactive content, timelines, maps, atlases and homework tools. 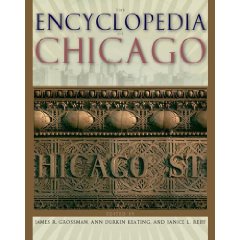 The Encyclopedia of Chicago is a historical reference work covering Chicago and the entire Chicago metropolitan area published by the University of Chicago Press. Released in October 2004, the work is the result of a ten-year collaboration between the Newberry Library and the Chicago Historical Society. It exists in both a hardcover print edition and an online format, known as the Electronic Encyclopedia of Chicago. The print edition is 1117 pages and includes 1400 entries, 2000 biographical sketches, 250 significant business enterprise descriptions, and hundreds of maps. Initially, the internet edition included 1766 entries, 1000 more images and sources.

The Dictionary of Australian Artists (DAA) was the outcome of a project begun in the 1970s at the University of Sydney under the leadership of Bernard Smith and funded by the Australian Research Council. Its development was continued after his retirement in 1981 by Joan Kerr (1938–2004), who brought a new standard of inclusivity to a work that had concentrated on mainstream figures.

Librairie Gründ, also known as "Les éditions Gründ " is a French publishing company. It was started in 1880 by Ernest Gründ and Émile Maguet as a bookstore in Paris in 1880, specialising in works about art.

Oxford Art Online is an Oxford University Press online gateway into art research, which was launched in 2008. It provides access to several online art reference works, including Grove Art Online, the online version of the Benezit Dictionary of Artists, and The Oxford Companion to Western Art. It also provides access to other Oxford art reference works, including the Encyclopedia of Aesthetics, and The Concise Oxford Dictionary of Art Terms. The site was updated on 1 December 2017 to enhance page design, search tools, linking, and media capabilities.