Gulf of Tehuantepec (Spanish : Golfo de Tehuantepec) is a large body of water on the Pacific coast of the Isthmus of Tehuantepec, southeastern Mexico, at 16°N95°W﻿ / ﻿16°N 95°W﻿ / 16; -95 . Many (but not all) Pacific hurricanes form in or near this body of water. A strong, gale-force wind called the Tehuano periodically blows out over the waters of the Gulf of Tehuantepec, inducing strong upwelling of nutrient-rich waters which support abundant sea life.

Spanish or Castilian, is a Romance language that originated in the Iberian Peninsula and today has over 450 million native speakers in Spain and the Americas. It is a global language and the world's second-most spoken native language, after Mandarin Chinese.

The gulf is in the path of the lowest landform between Mexico and Northern Central America, allowing unhindered wind passage from the Gulf of Mexico, and the Eastern Pacific Ocean.

Coatzacoalcos is a major port city in the northern part of the Mexican state of Veracruz, mostly on the western side of the Coatzacoalcos River estuary, on the Bay of Campeche, on the southern Gulf of Mexico coast. The city serves as the municipal seat of the municipality of the same name. 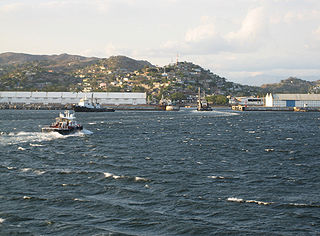 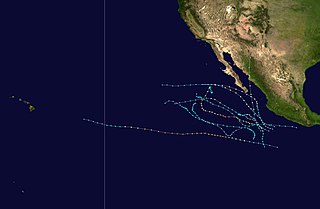 The 1995 Pacific hurricane season was the least active Pacific hurricane season since 1979. Of the eleven tropical cyclones that formed during the season, four affected land, with the most notable storm of the season being Hurricane Ismael, which killed at least 116 people in Mexico. The strongest hurricane in the season was Hurricane Juliette, which reached peak winds of 150 mph (240 km/h), but did not significantly affect land. Hurricane Adolph was an early-season Category 4 hurricane. Hurricane Henriette brushed the Baja California Peninsula in early September.

The 1986 Pacific hurricane season saw several tropical cyclones contribute to significant flooding to the Central United States. The hurricane season officially started May 15, 1986, in the eastern Pacific, and June 1, 1986 in the central Pacific, and lasted until November 30, 1986 in both regions. These dates conventionally delimit the period of each year when most tropical cyclones form in the northeastern Pacific Ocean. A total of 17 named storms and 9 hurricanes developed during the season; this is slightly above the averages of 15 named storms and 8 hurricanes, respectively. In addition, 26 tropical depressions formed in the eastern Pacific during 1986, which, at the time, was the second most ever recorded; only the 1982 Pacific hurricane season saw a higher total. 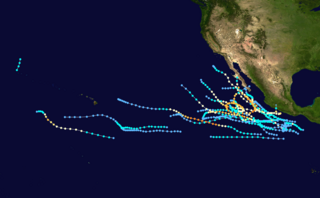 The 1984 Pacific hurricane season was a very active season, producing 21 named storms. When Fausto became a tropical storm on July 3, it was the earliest the sixth named storm was named. This record would be tied in 1985 and broken 34 years later. The season produced 26 tropical cyclones, of which 21 developed into named storms; 13 cyclones attained hurricane status, of which three reached major hurricane status. The season officially started on May 15, 1984, in the eastern Pacific, and June 1, 1984, in the central Pacific, and lasted until November 30, 1984. These dates conventionally delimit the period of each year when the vast majority tropical cyclones form in the northeastern Pacific Ocean. The strongest hurricane of the season was Hurricane Douglas, which attained Category 4 status on the Saffir-Simpson Hurricane Scale in the open Pacific.

The 1983 Pacific hurricane season was the longest season ever recorded at that time, which was later surpassed by the 2015 and 2016 seasons. The 1983 Pacific hurricane season started on May 15, 1983 in the eastern Pacific, and on June 1, 1983 in the central Pacific, and lasted until November 30, 1983. These dates conventionally delimit the period of each year when most tropical cyclones form in the northeastern Pacific Ocean. During the 1983 season, there were 21 named storms, which was slightly less than the previous season. Furthermore, eight storms reached major hurricane status, or Category 3 or higher on the Saffir–Simpson hurricane wind scale (SSHWS). The decaying 1982–83 El Niño event likely contributed to this level of activity. That same El Niño influenced a very quiet Atlantic hurricane season.

The 1982 Pacific hurricane season, with 23 named storms, ranks as the fourth-most active Pacific hurricane season on record, tied with 2018. It was at that time the most active season in the basin until it was later surpassed by the 1992 season. It officially started June 1, 1982, in the eastern Pacific, and June 1, 1982, in the central Pacific, and lasted until October 31, 1982, in the central Pacific and until November 15, 1982, in the Eastern Pacific. These dates conventionally delimit the period of each year when most tropical cyclones form in the northeastern Pacific Ocean. At that time, the season was considered as the most active season within the basin; however, the 1992 season surpassed these numbers a decade later. 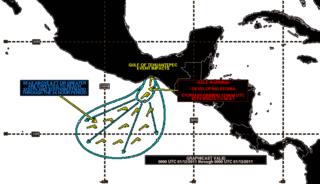 Tehuantepecer, or Tehuano wind, is a violent mountain-gap wind traveling through Chivela Pass, most common between October and February, with a summer minimum in July. It originates from eastern Mexico and the Bay of Campeche as a post-frontal northerly wind, accelerated southward by cold air damming, which crosses the isthmus and blows through the gap between the Mexican and Guatemalan mountains. The term dates back to at least 1929. This wind can reach gale, storm, even hurricane force. The leading edge of its outflow may form rope cloud over the Gulf of Tehuantepec. These winds can be observed on satellite pictures such as scatterometer wind measurements, they influence waves which then propagate as swell and are sometimes observed 1,600 km (1,000 mi) away. These strong winds bring cooler sub-surface waters to the surface of the tropical eastern Pacific Ocean and may last from a few hours to 6 days.

The 1920–1929 Pacific hurricane seasons all began during late spring in the northeast Pacific Ocean and the central Pacific. They ended in late fall. 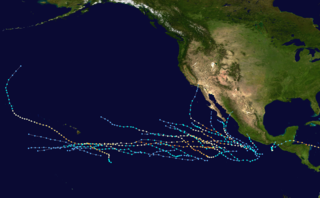 The Sierra Madre de Oaxaca is a mountain range in southern Mexico. It is primarily in the state of Oaxaca, and extends north into the states of Puebla and Veracruz.

The Chivela Pass is a narrow mountain pass in the Sierra Madre Mountains that funnels cooler, drier air from the North American continent, through southern Mexico, into the Pacific. These northeasterly winds, specifically the Tehuano wind, which periodically blows across the Isthmus of Tehuantepec in southern Mexico, and offshore over hundreds of miles of the Pacific Ocean, forcing the upwelling of colder subsurface waters. This strong upwelling brings nutrients from the subsurface layers of the ocean, thereby enhancing the fertility of the offshore waters. This results in strong plankton growth which in turn supports a more bountiful fishery in the region. 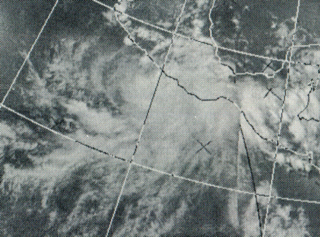 Hurricane Bridget of June 1971 was one of the worst hurricanes to strike the Mexican city of Acapulco. It formed on June 14 as a tropical depression, which is a minimal tropical cyclone with winds less than gale force. However, it was soon upgraded to a tropical storm, and Bridget steadily intensified to become a hurricane on June 15. After peaking at Category 2 intensity, it weakened to a tropical storm on June 17, then made landfall in Mexico. Hours later, however, it turned offshore as a tropical depression. Bridget dissipated on June 20 after leaving heavy damage and 17 deaths in the Acapulco area. 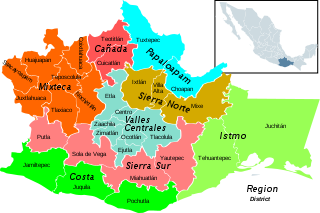 Istmo de Tehuantepec is the largest region of the state of Oaxaca, located in southwestern Mexico.

Juchitán District is located in the east of the Istmo de Tehuantepec region of the State of Oaxaca, Mexico, covering the southern part of a low-lying corridor through the mountains that separates the Gulf of Mexico from the Pacific ocean. The district has an area of 13,300 km2 and a population as of 2005 of 339,445.

The 1930–1939 Pacific hurricane seasons all began during the summer in the northeast Pacific Ocean and the central Pacific. They ended in late fall.

The Papagayo jet, also referred to as the Papagayo Wind or the Papagayo Wind Jet, are strong intermittent winds that blow approximately 70 km north of the Gulf of Papagayo, after which they are named. The jet winds travel southwest from the Caribbean and the Gulf of Mexico to the Pacific Ocean through a pass in the Cordillera mountains at Lake Nicaragua. The jet follows the same path as the northeast trade winds in this region; however, due to a unique combination of synoptic scale meteorology and orographic phenomena, the jet winds can reach much greater speeds than their trade wind counterparts. That is to say, the winds occur when cold high-pressure systems from the North American continent meet warm moist air over the Caribbean and Gulf of Mexico, generating winds that are then funneled through a mountain pass in the Cordillera. The Papagayo jet is also not unique to this region. There are two other breaks in the Cordillera where this same phenomenon occurs, one at the Chivela Pass in México and another at the Panama Canal, producing the Tehuano (Tehuantepecer) and the Panama jets respectively.