Gumdag (formerly Kum Dag) is a city located in the Balkan province of Turkmenistan. It is located 43 km southeast of the city of Balkanabat. The city is home to the Gumdag oil and gas field.

Before Gumdag was established as a village, it was called Khuday-Dag, Bahangosha and Moncuklu. [1] Gumdag was founded as a village in the 1930s by nomadic families from nearby settlements. In the same years, a drilling machine was installed by the government in the sand hill 3 km west of the village. With the emergence of oil from the region, people from Balkanabat and other cities started to flock here. From 1951 to 1956, it remained attached to the Ashgabat region. 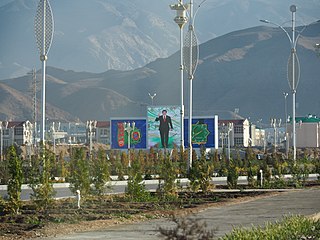 Balkanabat (Балканабат), formerly Nebit-Dag and Neftedag, is a city in western Turkmenistan and the capital of Balkan Province, the largest province in the country. It is located at 39°31′0″N54°22′0″E, at an altitude of 17 metres.

Asipovichy or Osipovichi is a town in Mahilyow Oblast, Belarus, located 136 km southwest of Mahilyow, 3 km south of the Minsk-Homyel expressway. It is located at the junction of railway lines between Minsk, Homel, Mahilyow, and Baranavichy. As of 2020, its population was 29,900. 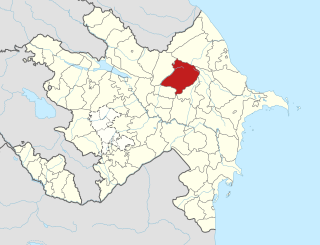 Ismayilli District is one of the 66 districts of Azerbaijan. It is located in the north of the country and belongs to the Mountainous Shirvan Economic Region. The district borders the districts of Qabala, Quba, Goychay, Kurdamir, Agsu, Shamakhi, and the Russian Republic of Dagestan. Its capital and largest city is Ismayilli. As of 2020, the district had a population of 87,400. 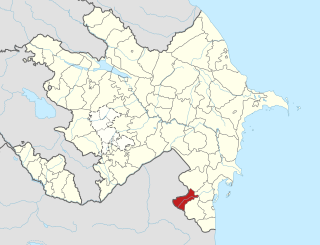 Yardimli District is one of the 66 districts of Azerbaijan. It is located in the south-east of the country and belongs to the Lankaran Economic Region. The district borders the districts of Jalilabad, Masally, Lerik, and the Ardabil Province of Iran. Its capital and largest city is Yardimli. As of 2020, the district had a population of 68,000. 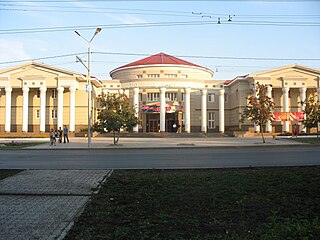 The 1989 Soviet census, conducted between 12 and 19 January of that year, was the last one that took place in the USSR. The census found the total population to be 286,730,819 inhabitants. In 1989, the Soviet Union ranked as the third most populous in the world, above the United States, although it was well behind China and India.

Turks in Ukraine are people of Turkish ethnicity living in Ukraine. The community is largely made of Meskhetian Turks and immigrants from Turkey.

Komsomolsky is an inhabited locality in Chaunsky District of Chukotka Autonomous Okrug, Russia, located about 100 kilometers (62 mi) south-west of Pevek, the administrative centre of the district. Population: 597 (2002 Census); 3,794 (1989 Census). According to an environmental impact report produced for the Kupol Gold Project, by 2005 the population had fallen further to just 508.

Turks in Russia are Turkish people who live in Russia. The community is largely made up of Meskhetian Turks and expatriates from Turkey as well as children of mixed ethnicities.

The M37 highway is a highway in Turkmenistan. It is the Turkmenistan section of the European route E60 and Asian Highway AH5, which connects Brest, France to Irkeshtam, Kyrgyzstan on the border with the People's Republic of China. It connects most of the major cities in the country from Turkmenbashy on the Caspian Sea on the west coast to Bukhara, Uzbekistan.

Grakhovsky District is an administrative and municipal district (raion), one of the twenty-five in the Udmurt Republic, Russia. It is located in the southwest of the republic. The area of the district is 967.7 square kilometers (373.6 sq mi). Its administrative center is the rural locality of Grakhovo. Population: 9,354 (2010 Census); 10,879 ; 11,699 (1989 Census). The population of Grakhovo accounts for 34.7% of the district's total population.

Ingiloys are an ethnographic subgroup of Georgians who speak Ingiloy dialect of Georgian language. Ingiloys are indigenous population of Saingilo, cultural and historical region in northwestern Azerbaijan. 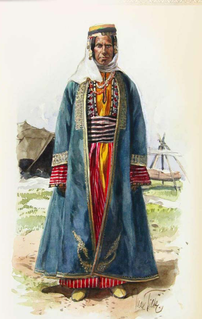 The Kurds in Turkmenistan form a part of the historically significant Kurdish population in the post-Soviet space, and encompass people born in or residing in Turkmenistan who are of Kurdish origin. In the 17th century, Abbas I of Persia and Nader Shah settled Kurdish tribes from Khuzestan alongside the Iranian-Turkmen border. More Kurds arrived to Turkmenistan in the 19th century to find unclaimed land and to escape starvation. 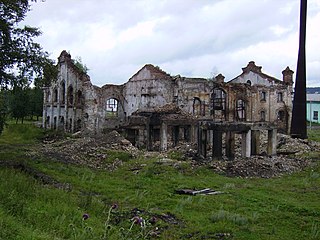 Tirlyan, also known as Tirlyansky, Tirlian and Bashkir Tirlan, is a village in the Beloretsky District of Bashkortostan, the center and the only settlement of the Tirlyansk soviet. It is located at the confluence of the Tirlian River and the Belaya River 33 km from Beloretsk. The nearest railway station is 41km away.

Tatars in Azerbaijan are Azerbaijani citizens and people of Tatar origin. According to the 2009 census, 25,882 Tatars live in the Republic of Azerbaijan. This is 0.29% of the total population.