Hollywood Vice Squad is a 1986 film directed by Penelope Spheeris with music by Keith Levene of Public Image Ltd. The movie has an early screen appearance by Robin Wright as the drug-addicted runaway daughter of Trish Van Devere's character. [1]

Pauline Stanton, a mother, travels to Hollywood to find her teenage runaway daughter, Lori. Once there, Pauline discovers that Lori has become involved in the pornography industry and teams with the police to find her and get her back.

The film received mixed reviews, with one review describing it as "decent, but dull." [2] 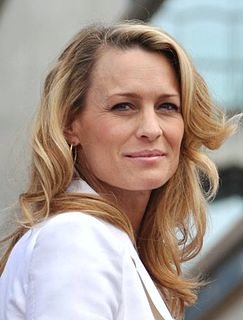 Robin Gayle Wright is an American actress. She has won a Golden Globe Award and a Satellite Award, and has received eleven Emmy Award nominations for her work in television.

Rebecca De Mornay is an American actress and producer. Her breakthrough film role came in 1983, when she starred as Lana in Risky Business. She is known for her role as Debby Huston in the Neil Simon film The Slugger's Wife. De Mornay is also known for her roles in Runaway Train (1985), The Trip to Bountiful (1985), Backdraft (1991), and The Hand That Rocks the Cradle (1992). 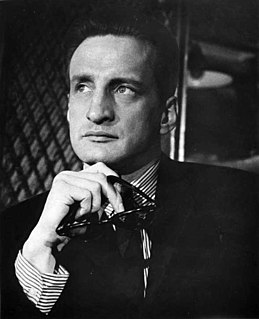 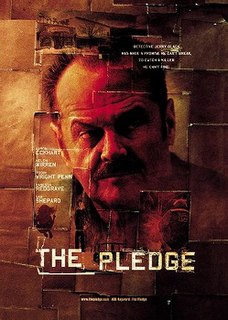 The Pledge is a 2001 American neo-noir mystery thriller film directed by Sean Penn. The film features an ensemble cast, starring Jack Nicholson, Patricia Clarkson, Aaron Eckhart, Helen Mirren, Robin Wright Penn, Vanessa Redgrave, Sam Shepard, Mickey Rourke, Tom Noonan, Lois Smith and Benicio del Toro. It is based on Friedrich Dürrenmatt's 1958 novella The Pledge: Requiem for the Detective Novel. Dürrenmatt wrote The Pledge to refine the theme he originally developed in the screenplay for the 1958 German film It Happened in Broad Daylight with Heinz Rühmann. It was in competition at the 2001 Cannes Film Festival. 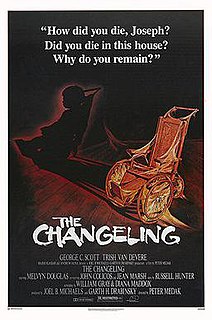 The Changeling is a 1980 Canadian supernatural psychological horror film directed by Peter Medak and starring George C. Scott, Trish Van Devere, and Melvyn Douglas. Its plot follows an esteemed New York City composer who relocates to Seattle, Washington, where he moves into a mansion he comes to believe is haunted. The screenplay is based upon events that writer Russell Hunter claimed he experienced while he was living in the Henry Treat Rogers mansion in the Cheesman Park neighborhood of Denver, Colorado, in the late 1960s; Hunter served as a co-writer of the film.

The Crossing Guard is a 1995 American independent drama film co-produced, written, and directed by Sean Penn. The film stars Jack Nicholson, David Morse, Robin Wright and Anjelica Huston. It tells the story of Freddy Gale, a man who has been tormented for more than five years by his daughter's death in a car accident. When he finds out that the man who was responsible for the death is being released from prison, he decides to seek vengeance.

She's So Lovely is a 1997 American romantic drama film directed by Nick Cassavetes, written by John Cassavetes. At the time of its release, it received special attention because, eight years after his death, it was the first posthumous film to feature previously unreleased material from John Cassavetes. 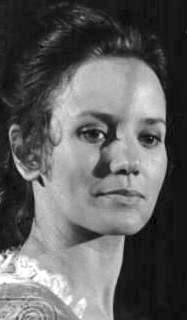 Trish Van Devere is a retired American actress. She was nominated for a Golden Globe Award for the film One Is a Lonely Number (1972), and won a Genie Award for the film The Changeling (1980). She is the widow of actor George C. Scott, with whom she appeared in multiple films. 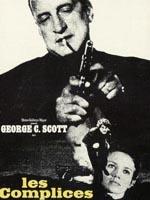 The Private Lives of Pippa Lee is a 2009 American romantic comedy-drama film written and directed by Rebecca Miller. The screenplay is based on her novel of the same name. It features an ensemble cast including Robin Wright, Alan Arkin, Maria Bello, Monica Bellucci, Blake Lively, Julianne Moore, Keanu Reeves, and Winona Ryder. 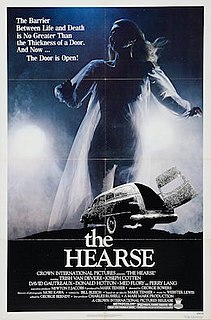 The Hearse is a 1980 American supernatural horror film directed by George Bowers and starring Trish Van Devere and Joseph Cotten. It follows a schoolteacher from San Francisco who relocates to a small town in northern California to spend the summer in a house she inherited from her deceased aunt, only to uncover her aunt's past as a devil worshipper, which seems to trigger a series of supernatural occurrences. 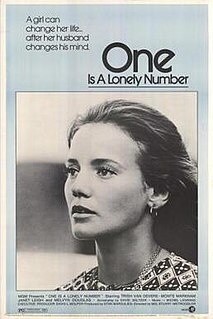 One Is a Lonely Number is a 1972 American drama film directed by Mel Stuart, and starring Trish Van Devere, Janet Leigh, and Melvyn Douglas. The screenplay, based upon the short story "The Good Humor Man" by Rebecca Morris, was written by David Seltzer.

Messenger of Death is a 1988 American crime-action thriller film starring Charles Bronson about an attempt by a water company to start a family feud among fundamentalist Mormons to take the family's land for the company.

The Conspirator is a 2010 American mystery historical drama film directed by Robert Redford and based on an original screenplay by James D. Solomon. It is the debut film of the American Film Company. The film tells the story of Mary Surratt, the only female conspirator charged in the Abraham Lincoln assassination and the first woman to be executed by the US federal government. It stars James McAvoy, Robin Wright, Justin Long, Evan Rachel Wood, Jonathan Groff, Tom Wilkinson, Alexis Bledel, Kevin Kline, John Cullum, Toby Kebbell, and James Badge Dale.

Ravenous is a 2017 French-language Canadian horror film directed by Robin Aubert and starring Marc-André Grondin, Monia Chokri, Brigitte Poupart, Luc Proulx, Charlotte St-Martin and Micheline Lanctôt. The film depicts the residents of a small town in rural Quebec as they deal with an outbreak leading to an attack by zombie-like persons.

Land is a 2021 drama film directed by Robin Wright in her feature directorial debut, from a screenplay by Jesse Chatham and Erin Dignam. It stars Wright, Demián Bichir and Kim Dickens. The film premiered at the 2021 Sundance Film Festival on January 31, and was released in the United States on February 12, 2021, by Focus Features. It received generally positive reviews from critics.

Slumber Party Massacre is a 2021 slasher film directed by Danishka Esterhazy and written by Suzanne Keilly. It is described as a "modern reimagining" of the original 1982 film The Slumber Party Massacre. It stars Hannah Gonera, Alex McGregor, Schelaine Bennett, Mila Rayne, and Rob van Vuuren and follows a girls' slumber party which becomes a bloodbath when an escaped mental patient arrives with a power drill.