Honingham Hall was a large country house at Honingham in Norfolk.

The house was commissioned by Sir Thomas Richardson, Chief Justice of the King’s Bench in 1605. [1] After passing down the Richardson family it was bought by Richard Baylie, President of St John's College, Oxford, in about 1650 [2] and was then acquired by William Townsend, Member of Parliament for Great Yarmouth in about 1735, before passing down the Townsend family. [3] In 1887 it was inherited by Ailwyn Fellowes, 1st Baron Ailwyn and in 1924 by Ronald Fellowes, 2nd Baron Ailwyn who sold it in 1935. [1] It was then bought by Sir Eric Teichman, a diplomat, who allowed it to become a Barnardo's home in 1940 during World War II. [4] Teichman was murdered in the grounds of the hall by a poacher one night in December 1944. The killer was Private George E. Smith of Pittsburgh who, with Private Leonard S. Wijpacha of Detroit, was trespassing in the grounds of the estate. Both intruders were American soldiers based at a nearby US airfield and each was armed with an M1 carbine. [5] The house closed as a Barnardo's home December 1966 and was subsequently demolished. [4]

Baron de Ramsey, of Ramsey Abbey in the County of Huntingdon, is a title in the Peerage of the United Kingdom. It was created in 1887 for Edward Fellowes, who had previously represented Huntingdonshire in the House of Commons as a Conservative for 43 years. His eldest son, the second Baron, sat as Member of Parliament for Huntingdonshire and Ramsey and later served as a Lord-in-waiting from 1890 to 1892 in the Conservative administration of Lord Salisbury. His grandson, the third Baron, was Lord Lieutenant of Huntingdonshire from 1947 to 1965 and of Huntingdon and Peterborough between 1965 and 1968. As of 2017 the title is held by the latter's son, the fourth Baron, who succeeded in 1993.

Baron Ailwyn, of Honingham in the County of Norfolk, was a title in the Peerage of the United Kingdom. It was created on 1 July 1921 for the Conservative politician the Hon. Sir Ailwyn Fellowes. He was the younger son of Edward Fellowes, 1st Baron de Ramsey. Lord Ailwyn was succeeded by the eldest of his four sons, Ronald, the second Baron. He was a Lieutenant-Colonel in the Rifle Brigade. He was childless and was succeeded by his younger brother Eric, the third Baron. He was a Captain in the Royal Navy. He was also childless and was succeeded by his youngest brother, Carol, the fourth Baron. Like his elder brothers, he was childless and the title became extinct on his death in 1988.

Ayscoughfee Hall is a grade I listed building and modest associated parkland in central Spalding, Lincolnshire, England, and is a landmark on the fen tour. 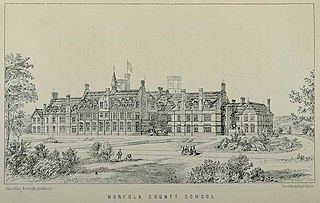 Watts Naval School was originally the Norfolk County School, a public school set up to serve the educational needs of the 'sons of farmers and artisans'. The school was then operated by Dr Barnardo's until its closure in 1953.

Ailwyn Edward Fellowes, 1st Baron Ailwyn, was a British businessman, farmer and Conservative politician. He was a member of Arthur Balfour's cabinet as President of the Board of Agriculture between March and December 1905. 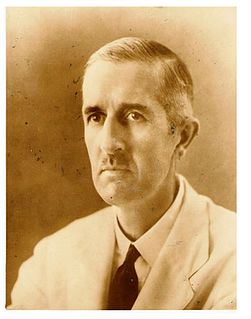 Sir Eric Teichman was a British diplomat and orientalist.

Lt.-Col. Ronald Townshend Fellowes, 2nd Baron Ailwyn was a British peer, the son of Ailwyn Edward Fellowes, 1st Baron Ailwyn. He succeeded to the Barony on 23 September 1924. He lived at Honingham Hall in Norfolk until he sold it in 1935.

William Henry Fellowes, of Ramsey Abbey in Huntingdonshire and Haverland Hall in Norfolk, was a British Member of Parliament.

Horstead Hall was a country house in Norfolk that was demolished in the 1950s.

The Honourable William Townshend was a British Member of Parliament.

Charles Frederick Powlett, 2nd Baron Bayning, known as the Honourable Charles Townshend from 1797 to 1810, was a British peer and Tory Member of Parliament.

Henry William-Powlett, 3rd Baron Bayning, styled The Honourable until 1823, was a British peer and clergyman. 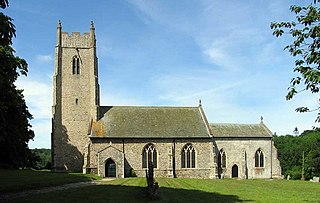 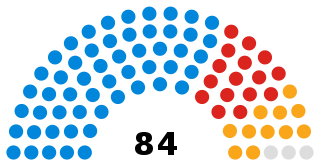 Norfolk County Council is the top-tier local government authority for Norfolk, England. Its headquarters are based in the city of Norwich.

Gunton Hall, Gunton Park, is a large country house near Suffield in Norfolk.