Hrvatske ceste (lit. Croatian roads) is a Croatian state-owned company pursuant to provisions of the Croatian Public Roads Act (Croatian : Zakon o javnim cestama enacted by the Parliament of the Republic of Croatia. [2] The tasks of the company are defined by the Public Roads Act and its Founding Declaration, and the principal task of the company is management, construction and maintenance of public roads. In practice, Hrvatske ceste are responsible for the state roads in Croatia (designated with D), while county (Ž) and local (L) roads are managed by county authorities and the motorways (A) are managed by Hrvatske autoceste and other concessionaires.

The company is currently administered by a four-person managing board including chairman Josip Škorić and a three-member supervisory board. [3]

All profits generated by Hrvatske ceste are used for construction and maintenance of the roads the company manages.

The A4 motorway is a motorway in Croatia spanning 97.0 kilometres (60.3 mi). It connects the nation's capital, Zagreb, to the city of Varaždin and to Budapest, Hungary via the Goričan border crossing. The motorway represents a major north–south transportation corridor in Croatia and is a part of European routes E65 and E71. The A4 motorway route also follows Pan-European corridor Vb.

The A5 motorway is a motorway in Croatia spanning 59 kilometres (37 mi). It connects Osijek, the largest city in Slavonia region, to the Croatian motorway network at the Sredanci interchange of the A3 motorway. The A5 represents a significant north–south transportation corridor in Croatia and is a part of the European route E73. The A5 motorway route also follows Pan-European corridor Vc. In addition to Osijek, the A5 motorway also passes near Đakovo.

D28 is a state road in the central Croatia connecting the D5 and D45 in Veliki Zdenci to the D10 in Gradec interchange. The road is 70.7 km (43.9 mi) The road, as well as all other state roads in Croatia, is managed and maintained by Hrvatske ceste, a state-owned company. 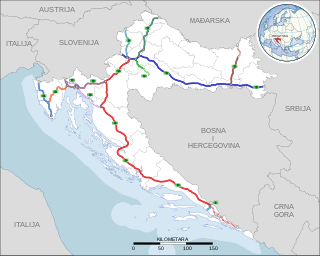 Highways in Croatia are the main transport network in Croatia. The Croatian classification includes several classes of highways:

D41 is a state road in the central Croatia connecting Križevci to Koprivnica and Gola border crossing to Hungary. The road is 57.9 km (36.0 mi) long.

D70 is a state road connecting the Omiš on the Adriatic coast the A1 motorway in Blato na Cetini interchange.

D44 is a state road connecting A9 motorway Nova Vas interchange to A8 expressway Lupoglav interchange via Buzet. The road is 50.5 km (31.4 mi) long.

D55 state road in the eastern part of Croatia connects the cities and towns of Vukovar, Vinkovci, Županja to the state road network of Croatia, and most notably to the A3 motorway. The road is 48.6 km (30.2 mi) long. The route comprises some urban intersections, mostly in the city of Vinkovci.

D38 is a state road in the Slavonia region of Croatia that connects the cities of Pakrac, Požega, Pleternica and Đakovo. The road is 120.7 km (75.0 mi) long.

D413 branches off to the north from D425 in Ploče towards Port of Ploče - providing ferry access to Trpanj on Pelješac peninsula. The road is 1.37 km (0.85 mi) long.

D36 is a state road in central Croatia connecting Kupa River area and the city of Sisak to Croatian motorway network at the A3 motorway Popovača interchange and to the D1 state road in Karlovac in immediate vicinity of the A1 motorway Karlovac interchange. The road is 107.8 km (67.0 mi) long.

D425 is a state road in Croatia, connecting the outskirts of Ploče with the A1 motorway connector at the Karamatići toll station. Its main purpose is a connection from the motorway to the Port of Ploče. The road is 9.87 km (6.13 mi) long.

D117 is a state road on Vis Island in Croatia connecting the town of Komiža to Vis ferry port, from where Jadrolinija ferries fly to the mainland, docking in Split and the D410 state road The road is 20.2 km (12.6 mi) long.

D45 connects the A3 motorway Kutina interchange to Kutina, Garešnica and the D5 state road. The road forms two junctions to the D26 state road, one in Garešnica, where D26 branches off to Daruvar, and another 3 km (1.9 mi) further north, where the D26 branches off to Čazma and Vrbovec. Between those two junctions the D45 and D26 are concurrent. The northern terminus of the road is in Veliki Zdenci, at a junction to the D5 state road to Virovitica and Daruvar and Pakrac. The road is 43.6 km (27.1 mi) long.

D26 is a state road in central Croatia connecting the D5 in Daruvar and the D10 expressway near Vrbovec, comprising a connection to the planned but cancelled A12 motorway route. The road is 88.5 km (55.0 mi) long.

D22 is a state road in the central Croatia connecting Novi Marof via Križevci, to the Sveti Ivan Žabno. The road is 42.7 km (26.5 mi) long.

Hrvatske autoceste (HAC) or Croatian Motorways Ltd is a Croatian state-owned limited liability company tasked with management, construction and maintenance of motorways in Croatia pursuant to provisions of the Croatian Public Roads Act enacted by the Croatian Parliament. Tasks of the company are defined by Public Roads Act and its Founding Declaration, and the principal task of the company is management, construction and maintenance of the motorways. In practice, Hrvatske autoceste is responsible for management or development the following motorway sections:

Autocesta Zagreb–Macelj is a Croatian limited liability company founded pursuant to decision of the government of the Republic of Croatia of 27 March 2003 to facilitate construction and subsequent management of a motorway between Zagreb and Macelj border crossing to Slovenia. The company was subsequently granted concession for construction and management of the A2 motorway, and restructured in the process: The Republic of Croatia retained 49% of ownership stake in the company, while 51% ownership stake was attained by Walter Motorway, owned by Walter Bau AG, Strabag and Dywidag. The company was granted the motorway management concession for a period of 28 years.

BINA Istra is a Croatian joint stock company founded in 1995 to facilitate construction and subsequent management of an Istrian Y motorway, consisting of the A8 motorway and the A9 motorway. On September 21, 1995, BINA Istra has been granted concession regarding management of the Istrian Y. The concession agreement is valid for 32 years, when the motorways shall be returned to the Republic of Croatia without any compensation.

The Zrinski Bridge or Zrínyi Bridge connects the Croatian A4 and the Hungarian M7 motorways, spanning the Mura River. As it also spans Hungarian–Croatian border, a joint border checkpoint is located north of the bridge. The bridge is located between Goričan interchange of the A4 motorway and the M70 motorway interchange of the M7. The bridge is a part of a major north–south transportation corridor in Croatia and Hungary and a part of European routes E65 and E71 as well as the Pan-European corridor Vb.