Teufel was born in 1961 to Hugo Teufel, Jr. and the former Carmen Margarita Trujillo. Teufel's father, Dr. Hugo Teufel, Jr., was born in Philadelphia, Pennsylvania. Hugo Teufel Jr.'s father was a German national who had emigrated to the U.S. in 1923. Teufel Jr.'s mother was a U.S. citizen of German parents. Hugo Teufel Jr.'s first language was German and he grew up in Wichita, Kansas. Teufel Jr. graduated from the University of Kansas and served as an officer in the United States Air Force, stationed at Kirtland Air Force Base, before receiving a master's and a doctorate in mathematics from the University of New Mexico and becoming a mathematics professor at Wichita State University. Teufel Jr. was a chess champion as a teenager.

Teufel's mother grew up in rural northern New Mexico and Spanish was her first language. She is Hispanic. During the 1950s, she studied anthropology at the University of New Mexico and earned a bachelor's degree in that field.

Teufel spent much of his childhood in Wichita, Kansas, but also lived in Santa Fe, New Mexico, before moving to Colorado. He graduated from Denver Lutheran High School in Denver in 1979.

In 1984, Teufel participated in Georgetown University's Summer Program in Trier, Germany. In 1985, he graduated from Metropolitan State College of Denver with a degree in Economics and a minor in German.

In 1998–99, while working at the Colorado Attorney General's Office, Teufel received law enforcement training at Arapahoe Community College in Littleton, Colorado, and received a certificate in law enforcement studies. He was P.O.S.T. certified (Peace Officer Standards and Training) in the state of Colorado.

From 1990 to 1991, Teufel clerked for Chief Judge Loren Smith of the United States Claims Court.

From 1991 to 1996, he was an associate with McKenna & Cuneo, LLP, focusing on government contracts and litigation against the United States.

From 1997-99, Teufel served as deputy Solicitor General for the state of Colorado under Colorado Attorney General Gale Norton.

From 1999 until 2001, he was a special counsel with Hall & Evans, a law firm that focused on public policy and government contracts in the Rocky Mountain region. During this time, he also served as a special assistant attorney general for the State of Colorado, briefing and arguing criminal appeals before the Colorado Court of Appeals and Colorado Supreme Court.

From July 2001 to January 2004, he served as associate solicitor at the U.S. Department of the Interior. He provided legal advice on privacy and FOIA issues, employment and labor issues, government contracts matters, matters involving territories and possessions of the United States, and occasionally on matters involving Native Americans. [1] Teufel and his staff also provided legal advice to management on personnel issues involving the former Chief of the Park Police, Teresa Chambers.

From January 2004 to July 2006, Teufel served as DHS' associate general counsel. He provided legal advice on privacy and FOIA issues, employment and labor issues, government contracts matters, and oversaw the staff of the U.S. Coast Guard's Board for Correction of Military Records. In 2005, Teufel helped Secretary Michael Chertoff with a "Second Stage Review" of the Department.

The first person to be DHS' Chief Privacy Officer was Nuala O'Connor Kelly, appointed by Secretary Tom Ridge. After Kelly left, the position was left open for 10 months, during which Maureen C. Cooney was the acting CPO. Teufel was sworn in on July 21, 2006. Teufel also served as the Department's Chief Freedom Of Information Act Officer.

Teufel was one of two DHS principals on the joint US/EU High Level Contact Group on information sharing and privacy and personal data protection. The HLCG, which formed in 2006 and completed its efforts in 2009, was composed of senior officials from the European Commission, the European Council Presidency, and the U.S. Departments of Homeland Security, Justice and State. The HLCG negotiated common principals underlying future information sharing between the U.S. and the European Union to fight terrorism and serious transnational crimes.

Teufel was involved with the Administration's Comprehensive National Cybersecurity Initiative (CNCI), meeting frequently with Congressional staff and reaching out to the privacy community on the Department's efforts with regard to CNCI. Teufel issued a privacy impact assessment of Einstein 2, [3] a computer network intrusion detection system designed for deployment within federal executive agencies for the protection of their information technology. As well, Teufel headed the cyber subcommittee, part of the CIO Council's privacy committee. [4] The subcommittee focuses on the privacy aspects of CNCI.

As part of his office's outreach and education mission, Teufel spoke frequently about the department and privacy at conferences at home and abroad, including the 2008 Iberoamerican Data Protection Network meeting in Cartagena de Indias, Colombia, and the November 2007 EU Conference on Public Security, Privacy and Technology in Brussels. [5]

In April 2009, Teufel was hired by PricewaterhouseCoopers LLP as a director in the firm's advisory practice. Teufel's focus at PwC was on "helping organizations with issues involving the privacy and security of data, cyber crime and corruption." [7] Matters include privacy compliance, security and identity theft assessment, privacy/security breach investigation and overall risk management strategies.

In November 2014, Teufel was the Senior Counsel for Global Privacy at Raytheon. [8]

In December 2016, he was part of the incoming Trump administration's transition team at DHS. [9]

Teufel and his wife, Maritza, have three daughters and live in Alexandria, Virginia. Teufel is a member of the Lutheran Church–Missouri Synod.

He is also a member of the Federalist Society and the National Rifle Association.

In 2008 and 2009, Teufel served as vice president for the American Society for Access Professionals. [10]

Teufel also serves in the Army National Guard, as an officer in the Judge Advocate General's Corps.

The Freedom of Information Act (FOIA), 5 U.S.C. § 552, is a federal freedom of information law that requires the full or partial disclosure of previously unreleased information and documents controlled by the United States government upon request. The act defines agency records subject to disclosure, outlines mandatory disclosure procedures, and defines nine exemptions to the statute. The act was intended to make U.S. government agencies' functions more transparent so that the American public could more easily identify problems in government functioning and put pressure on Congress, agency officials, and the president to address them. 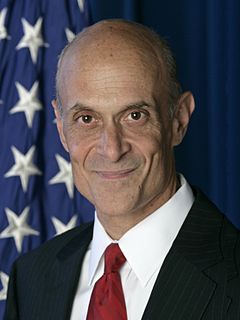 The Real ID Act of 2005, Pub.L. 109–13 (text)(pdf), 119 Stat. 302, enacted May 11, 2005, is an Act of Congress that modifies U.S. federal law pertaining to security, authentication, and issuance procedure standards for drivers' licenses and identity documents, as well as various immigration issues pertaining to terrorism.

Stewart Abercrombie Baker was the first Assistant Secretary for Policy at the United States Department of Homeland Security under the Presidency of George W. Bush.

The Automated Targeting System or ATS is a United States Department of Homeland Security computerized system that, for every person who crosses U.S. borders, scrutinizes a large volume of data related to that person, and then automatically assigns a rating for which the expectation is that it helps gauge whether this person may be placed within a risk group of terrorists or other criminals. Similarly ATS analyzes data related to container cargo.

Teufel is a German-language surname which comes from the word "devil".

Phil Reitinger was the Deputy Under Secretary of the National Protection and Programs Directorate (NPPD) and Director of the National Cybersecurity Center (NCSC) at the United States Department of Homeland Security from 2009 to 2011. During that time, Reitinger led the department's integrated efforts to reduce risks across physical and cyber infrastructures and helping secure federal networks and systems by collecting, analyzing, integrating and sharing information among interagency partners.

Juliette N. Kayyem is a former bureaucrat, author and host of the WGBH podcast The SCIF. She serves as a national security analyst for CNN and is a weekly guest on Boston Public Radio. She is the Belfer Lecturer in International Security at the John F. Kennedy School of Government at Harvard and a member of the Council on Foreign Relations and the Pacific Council on International Policy. She is a former candidate for Governor of Massachusetts and a former Boston Globe columnist, writing about issues of national security and foreign affairs for the op-ed page.

Carlos Armando Samour Jr. is an Associate Justice of the Colorado Supreme Court and former chief judge for the Eighteenth Judicial District Court in Colorado. He is known for serving as the judge for the trial of James Eagan Holmes, the convicted perpetrator of the 2012 Aurora, Colorado shooting.

Systematic Alien Verification for Entitlements (SAVE) is a program managed by United States Citizenship and Immigration Services (USCIS), a branch of the U.S. Department of Homeland Security (DHS). SAVE facilitates lookups on the immigration and nationality status of individuals in the United States. It is an intergovernmental initiative designed to help federal, state, tribal, and local government agencies, or by a contractor acting on the agency's behalf, to determine eligibility for benefits, licenses or grants, government credentials, or to conduct background investigations. It is one of two programs that uses the Verification Information System (VIS). The other program is the Electronic Employment Eligibility Verification Program, also known as E-Verify, and is used by employers to verify the immigration status of employees. For additional verification, SAVE relies on the Person Centric Query System (PCQS).

David J. Glawe was the Under Secretary of Homeland Security for Intelligence and Analysis from January 2017 to May 2020 and is currently the President and CEO of the National Insurance Crime Bureau.

Department of Homeland Security v. Regents of the University of California, 591 U.S. ___ (2020), was a United States Supreme Court case in which the Court held that a 2017 U.S. Department of Homeland Security (DHS) order to rescind the Deferred Action for Childhood Arrivals (DACA) immigration program was "arbitrary and capricious" under the Administrative Procedure Act (APA) and reversed the order.

Robert Peter Silvers is an American lawyer and government official who has served as the Under Secretary of Homeland Security for Strategy, Policy, and Plans since 2021.