Indiana Hi-Rail Corporation( reporting mark IHRC) was a railroad which operated lines in the U.S. states of Indiana, Illinois and Ohio. It ceased operations after it was declared bankrupt in 1997. [1] The railroad was known for its extensive use of locomotives built by the American Locomotive Company (ALCO). 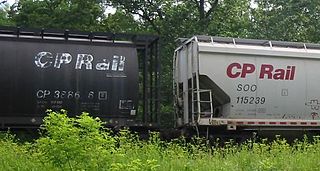 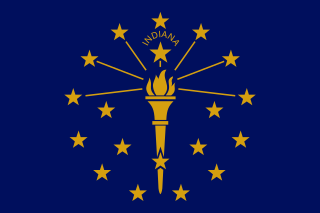 Indiana is a U.S. state located in the Midwestern and Great Lakes regions of North America. Indiana is the 38th largest by area and the 17th most populous of the 50 United States. Its capital and largest city is Indianapolis. Indiana was admitted to the United States as the 19th U.S. state on December 11, 1816. Indiana borders Lake Michigan to the northwest, Michigan to the north, Ohio to the east, Kentucky to the south and southeast, and Illinois to the west. 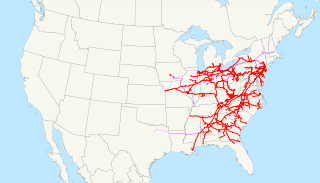 The Norfolk Southern Railway is a Class I railroad in the United States. With headquarters in Norfolk, Virginia, the company operates a route of 21,500 miles (34,600 km) in 22 eastern states, the District of Columbia, and has rights in Canada over the Albany to Montréal route of the Canadian Pacific Railway, and previously on CN from Buffalo to St. Thomas. NS is responsible for maintaining 26,300 miles (42,300 km), with the remainder being operated under trackage rights from other parties responsible for maintenance. The most common commodity hauled on the railway is coal from mines in Indiana, Kentucky, Pennsylvania, Tennessee, Virginia, and West Virginia. The railway also offers the largest intermodal network in eastern North America.

The New York, Susquehanna and Western Railway is a Class II American freight railway operating over 500 miles (800 km) of track in the northeastern states of New York, Pennsylvania and New Jersey. 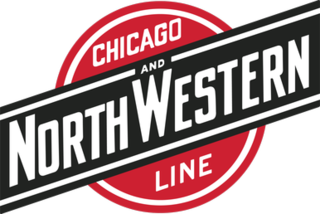 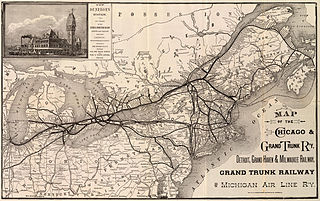 The Grand Trunk Western Railroad Company is an American subsidiary of the Canadian National Railway operating in Michigan, Illinois, Indiana and Ohio. Since a corporate restructuring in 1971 the railroad has been under CN's subsidiary holding company the Grand Trunk Corporation. Grand Trunk Western's routes are part of CN's Michigan Division. Its primary mainline between Chicago, Illinois, and Port Huron, Michigan, serves as a connection between railroad interchanges in Chicago and rail lines in eastern Canada and the Northeastern United States. The railroad's extensive trackage in Detroit and across southern Michigan has made it an essential link for the automotive industry as a hauler of parts and automobiles from manufacturing plants.

The Chicago South Shore and South Bend Railroad, also known as the South Shore Line, is a Class III freight railroad operating between Chicago, Illinois, and South Bend, Indiana. The railroad serves as a link between Class I railroads and local industries in northeast Illinois and northwest Indiana. It built the South Shore Line electric interurban and operated it until 1990, when it transferred it to the Northern Indiana Commuter Transportation District. The railroad is owned by the Anacostia Rail Holdings Company.

The I&M Rail Link was a railroad operating in the north central portion of the United States. The company commenced operations on April 5, 1997, acquiring lines from the Canadian Pacific Railway and Soo Line Railroad. 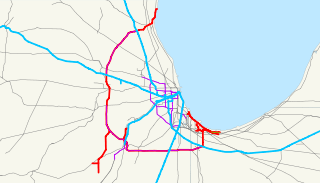 The Elgin, Joliet and Eastern Railway was a Class I railroad, operating between Waukegan, Illinois and Gary, Indiana. The railroad served as a link between Class I railroads traveling to and from Chicago, although it operated almost entirely within the city's suburbs, and only entered Chicago where it served the U.S. Steel South Works on the shores of Lake Michigan. Nicknames for the railroad included "The J" and "The Chicago Outer Belt Line". At the end of 1970, the EJ&E operated 164 miles of track and carried 848 million ton-miles of revenue freight in that year alone. 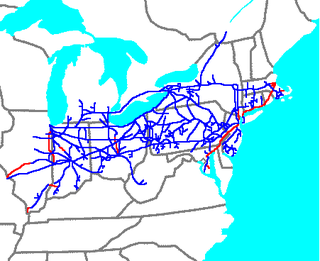 Conrail was the primary Class I railroad in the Northeastern United States between 1976 and 1999. The trade name Conrail is a portmanteau based on the company's legal name, and while it no longer operates trains it continues to do business as an asset management and network services provider in three Shared Assets Areas that were excluded from the division of its operations during its acquisition by CSX Corporation and the Norfolk Southern Railway.

The Montreal, Maine and Atlantic Railway was a Class II freight railroad that operated in the U.S. states of Maine and Vermont and the Canadian province of Quebec between 2002 and 2014. It was headquartered in Hermon, Maine.

This page contains a list of terms, jargon, and slang used to varying degrees by railfans and railroad employees in the United States and Canada. Although not exhaustive, many of the entries in this list appear from time to time in specialist, rail-related publications. Inclusion of a term in this list does not necessarily imply its universal adoption by all railfans and railroad employees, and there may be significant regional variation in usage.

The Indian Creek Railroad is a short-line railroad in Madison County, Indiana, United States. The 4.55-mile (7.32 km) line is owned by Kokomo Grain Company, an agricultural products and services company, and connects their property at 40°11′30″N85°44′40″W with the Norfolk Southern Railway's Marion Branch in northern Anderson, carrying outbound grain and inbound fertilizer. 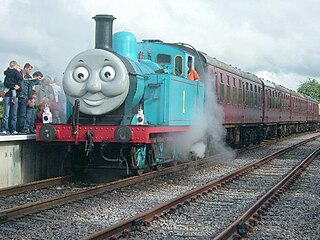 Day Out With Thomas is a trade name, licensed by Mattel for tourist events that take place on heritage railways and feature one or more engines decorated to look like characters from the classic children's Television Show, Thomas the Tank Engine and Friends. 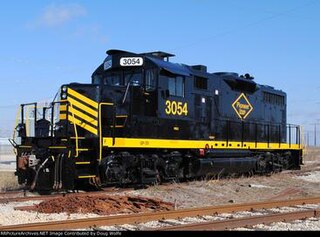 The Michigan Southern Railroad (Formerly Maumee & Western reporting - MAW) is a freight railroad in the United States operating between Woodburn, Indiana and Napoleon, Ohio and comprises 53 miles of track. The railroad originally extended to Toledo; portions have been converted to a rail trail.

The Indiana Boxcar Corporation (IBC), based in Connersville, Indiana, United States, provides services such as locomotive leasing to the rail industry. It also owns several short-line railroads which operate lines under contract for their owners:

The Winamac Southern Railway is a short-line railroad in northern Indiana, United States, operated under lease by the U S Rail Corporation. It owns two lines radiating from Logansport to Kokomo and Bringhurst, and formerly a third to Winamac, all former Pennsylvania Railroad lines acquired from Conrail in 1993. It hauls mainly outbound grain and inbound agricultural supplies, connecting with the Toledo, Peoria and Western Railway at Logansport and with the Central Railroad of Indianapolis at Kokomo. Until 2009, the Central Railroad of Indianapolis operated the company as agent.

The Wabash Central Railroad is a short-line railroad that operates between Van Buren and Craigville, United States, crossing a Norfolk Southern Railway line in Bluffton. It began operations in 1997, replacing the Indiana Hi-Rail Corporation on an ex-Toledo, St. Louis and Western Railroad line.