Iraq for Sale: The War Profiteers

Iraq for Sale: The War Profiteers is a 2006 documentary film made by Robert Greenwald and Brave New Films. Produced while the Iraq War was in full swing, the film deals with the alleged war profiteering and negligence of private contractors and consultants who went to Iraq as part of the US war effort. [1]

Specifically, the film claims four major contractors - Blackwater, K.B.R.-Halliburton, CACI and Titan [2] - were over-billing the U.S. government and doing substandard work while endangering the lives of American soldiers, Iraqi civilians, and their own employees. [1] These corporations were tasked with “virtually everything except the actual killing,” [3] including food, laundry, housing, security, intelligence gathering and interrogation. [4]

The film starts with the events of March 2004 in Fallujah, where four Blackwater contractors were ambushed, set afire, their burned corpses dragged through the streets and then finally displayed hanging from a bridge. [5] In interviews, two of the contractors’ families contend that Blackwater, in search of higher profit, neglected to provide proper support and protection to their employees, [5] including maps, decent translators, an armored vehicle, and sufficient security personnel (their convoy was short a machine gunner). [5] [6] The families contend that with such support, their loved ones might be alive today. [6]

Iraq for Sale then takes contractors Titan and CACI to task for providing “interrogation support” for the notorious Abu Ghraib prison. These civilian contractors were outside the chain of military command, and were never held accountable for the amply documented, unsupervised torture they initiated. [3]

According to interviews with survivors, Halliburton subsidiary KBR was responsible for the “Good Friday Massacre” deaths of six drivers who the corporation irresponsibly put into dangerous zones - zones which were supposed to be off limits to civilians. [7] Also, in interviews, Halliburton’s former employees charge that while the company had a sole contract to provide purified water for US troops, they actually distributed contaminated drinking water. [5]

Greenwald and Brave New Films document that at the time of production, the corporations in question had made more than tens of billions of dollars from their contracts in Iraq. [6] In part this was because the companies were working under “cost-plus” contracts, which reimbursed whatever they spent in expenses, plus extra, for profit. [3] This means that they actually made more money when they destroyed expensive equipment and machinery, rather than repairing it. [1] The film features footage of a burning $80,000 truck (whose only problem was a blown tire) that Halliburton had set afire on the side of the road rather than replacing the tire. [3]

Some of the other allegations brought up in the film include:

This was the first film to raise substantial production funds from small donations online: $267,892 from 3,000 people in 10 days. [8] The film had a limited theatrical release. [6] It was simultaneously released on DVD and shown nationwide at thousands of Brave New Films’ hallmark “house parties.” [3]

Iraq for Sale is among the best-reviewed of Brave New Films’ filmography, earning 100% approval from critics aggregated by Rotten Tomatoes. [9] The New York Times called it “a horrifying catalog of greed, corruption and incompetence among private contractors in Iraq,” [10] adding the film is “extremely effective.” [10] Salon says it was “dogged and impressive investigative reporting,” [3] and the Village Voice called it “a much needed reminder of the criminal negligence of those who lead the troops into this mess and those who have gotten rich off of it.” [11] Conservative press has been less charitable, saying the film “go[es] primarily on emotion and political posturing.” [2]

Greenwald attempted to interview representatives of the companies in question for the film, to no avail. [3] Halliburton contends the film is "yet another rehash of inaccurate, recycled information." [12] Eric Prince, founder of Blackwater, dismissed the film as “election year left-wing politics.” [13] On their website’s FAQ, CACI says it would be a “maliciously false accusation” to call them war profiteers. [14]

Halliburton Company is an American multinational corporation. One of the world's largest oil field service companies, it has operations in more than 70 countries. It owns hundreds of subsidiaries, affiliates, branches, brands, and divisions worldwide and employs approximately 55,000 people.

KBR, Inc. is an American engineering, procurement, and construction company, formerly a subsidiary of Halliburton. After Halliburton acquired Dresser Industries in 1998, Dresser's engineering subsidiary, the M. W. Kellogg Co., was merged with Halliburton's construction subsidiary, Brown & Root, to form Kellogg Brown & Root. KBR and its predecessors have received many contracts with the U.S. military including during World War II, the Vietnam War, and the Iraq War. Democratic Congressman Lyndon B. Johnson, later President of the United States, was instrumental in providing government contracts for Brown & Root, in exchange for the company funding his campaigns and otherwise providing money to him.

A war profiteer is any person or organization that makes unreasonable profits from warfare or by selling weapons and other goods to parties at war. The term typically carries strong negative connotations. General profiteering, making an unreasonable profit, also occurs in peacetime. An example of war profiteers were the "shoddy" millionaires who allegedly sold recycled wool and cardboard shoes to soldiers during the American Civil War. Some have argued that major modern defense conglomerates like Lockheed Martin, Boeing, BAE Systems, General Dynamics, and Raytheon fit the description in the post-9/11 era. This argument is based in the political influence of the defense industry, for example in 2010 the defense industry spent $144 million on lobbying and donated over $22.6 million to congressional candidates, as well as large profits for defense company shareholders in the post-9/11 period.

Abu Ghraib prison was a prison complex in Abu Ghraib, Iraq, located 32 kilometers (20 mi) west of Baghdad. Abu Ghraib prison was opened in the 1950s and served as a maximum-security prison with torture, weekly executions, and squalid living conditions. From the 1980s, the prison was used by Saddam Hussein and later the United States to hold political prisoners. It developed a reputation for torture and extrajudicial killing, and was closed in 2002.

Janis Leigh Karpinski is a career officer in the US Army Reserve and a war criminal, now retired. She is notable for having commanded the forces that operated Abu Ghraib and other prisons in Iraq in 2003 and 2004, at the time of the scandal related to torture and prisoner abuse. She commanded three prisons in Iraq, and the forces that ran them. Her education includes a Bachelor of Arts degree in English and secondary education from Kean College, a Master of Arts degree in aviation management from Embry-Riddle Aeronautical University, and a Master of Arts in strategic studies from the U.S. Army War College. 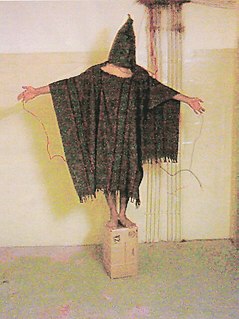 During the early stages of the Iraq War, United States Army and Central Intelligence Agency personnel committed a series of human rights violations against detainees in the Abu Ghraib prison in Iraq, including physical and sexual abuse, torture, rape, sodomy, and murder. The abuses came to public attention with the publication of photographs of the abuse by CBS News in April 2004. The incidents received widespread condemnation both within the United States and abroad.

CACI International Inc is an American multinational professional services and information technology company headquartered in Arlington, Virginia. CACI provides services to many branches of the US federal government including defense, homeland security, intelligence, and healthcare.

Steven Anthony Stefanowicz was involved, as a private contractor for CACI International, in the interrogations at Abu Ghraib prison in Iraq.

Stephen "Scott" Helvenston was a United States Navy SEAL. He was working as a security contractor for Blackwater Security when he was killed in the 31 March 2004 Fallujah ambush within days of arriving in Iraq.

Specialist Tony Lagouranis is a former United States Army soldier, best known for having participated in torture as an interrogator during the occupation of Iraq. He was featured in the 2008 Academy Award-winning documentary Taxi to the Dark Side.

Pratap Chatterjee is an Indian/Sri Lankan investigative journalist and progressive author. He is a British citizen and grew up in India, although he lived in California for many years. He serves as the executive director of CorpWatch, an Oakland-based corporate accountability organisation. He also works for the Bureau of Investigative Journalism in London. He writes regularly for The Guardian and serves on the board of Amnesty International USA and of the Corporate Europe Observatory

The Fay Report, officially titled Investigation of Intelligence Activities at Abu Ghraib, was a military investigation into the torture and abuse of prisoners at the Abu Ghraib prison in Iraq. It was sparked by leaked images of Iraqi prisoners, hooded and naked, being mistreated obtained by the United States and global media in April 2004. The Fay Report was one of five such investigations ordered by the military and was the third to be submitted, as it was completed and released on August 25, 2004. Prior to the report's release, seven reservist military police had already been charged for their roles in the abuse at the prison, and so the report examined the role of military intelligence, specifically the 205th Military Intelligence Brigade that was responsible for the interrogation of prisoners at Abu Ghraib. General Paul J. Kern was the appointing authority for the report and oversaw the investigation. The chief investigators were Major General George Fay, whom the report is named after, and Lieutenant General Anthony R. Jones.

Jamie Leigh Jones is a former employee of KBR, an American engineering, construction and private military contracting company. During her employment, KBR was a subsidiary of Halliburton from 1962 to 2007. She is notable for accusing then fellow KBR employees of drugging and gang-raping her on July 28, 2005, at Camp Hope, Baghdad, Iraq. A federal grand jury investigated her claims but issued no indictments.

Emad Khudhayir Shahuth al-Janabi was an Iraqi blacksmith detained in Abu Ghraib prison where he alleges he was abused by American military personnel and defense contractors.

Brave New Films (BNF) is a new media company based in Culver City, California. Founded by filmmaker Robert Greenwald, BNF produces feature-length documentaries and investigative videos that according to Greenwald's website, seek "to educate, influence and empower viewers to take action around issues that matter."

The Good Friday Ambush 2004 was an attack by Iraqi insurgents on April 9, 2004 during the Iraq War on a convoy of U.S. supply trucks near Baghdad International Airport. It happened in the midst of the Iraq spring fighting of 2004, which saw intensified clashes throughout the country. 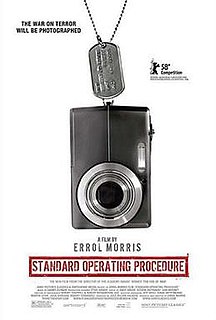 Standard Operating Procedure is a 2008 American documentary film which explores the meaning of the photographs taken by U.S. military police at the Abu Ghraib prison in late 2003, the content of which revealed the torture and abuse of its prisoners by U.S. soldiers and subsequently resulted in a public scandal. The film was directed by Errol Morris.

Susan L. Burke is an American lawyer known for cases in which she has represented plaintiffs suing the American military or military contractors, such as the Abtan v. Blackwater case. She represented former detainees of Abu Ghraib prison in a suit against interrogators and translators from CACI and Titan Corp. who were tasked with obtaining military intelligence from them during their detention.