It's Not What You Know

If the players make an incorrect guess (meaning that their chosen celebrity, specialist or non-specialist, got the question right), they lose what they have accumulated so far. They will still be allowed to continue playing at their current prize level, restarting their jackpot from zero. However, if they make an incorrect guess twice in a row, they'll go down a level (unless they are still on the first level).

If at any point the players are uncertain of correctly guessing a stumped celebrity, they can pass on the question they are on and keep their winnings safe (they are only allowed to pass on a question once, though), but they cannot pass on Question 15 (the last question) because "that would be too easy", stated by Chris Tarrant.

The players then get offered between 20% and 50% of how much they had amassed in the game after Question 14. If the players accept the offer, they'll take home with them the amount of money offered and still go on to Question 15, just to see what would have happened. If the players reject the offer, they'll go on to Question 15 and try to make a correct guess. If they select a stumped celebrity, their jackpot goes up by £1,000, £5,000, £10,000, £15,000 or £25,000 (depending on which ever level they were on) and the players take home with them whatever they have banked. If they select a celebrity who answered the question correctly, they'll leave empty-handed. 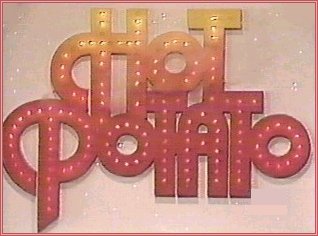 Hot Potato is a television game show that was broadcast on NBC in the United States from January 23 to June 29, 1984. From April 23 until its conclusion, the show was known as Celebrity Hot Potato.

Go is an American television game show created by Bob Stewart and aired on NBC from October 3, 1983, to January 20, 1984. The show featured two teams, each composed of four contestants and a celebrity. The teams had to construct questions one word at a time to convey a word or phrase to their teammates. The concept of Go was based on a bonus round used on Chain Reaction, another game show created by Stewart. 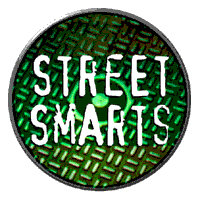 Street Smarts was a United States game show that featured two in-studio contestants trying to predict the outcome of interviews of people who were found on the street. The show, which was presented by Frank Nicotero, aired in syndication from 2000 to 2005.

Pilipinas, Game Ka Na Ba?, stylized as Pilipinas, Game KNB? was a Philippine game show by ABS-CBN which aired from October 1, 2001 to October 23, 2009. The show was hosted initially by Kris Aquino and was replaced by Edu Manzano in the latter versions. It was also aired on The Filipino Channel. The show was broadcast from ABS-CBN Studio 8 in Quezon City. 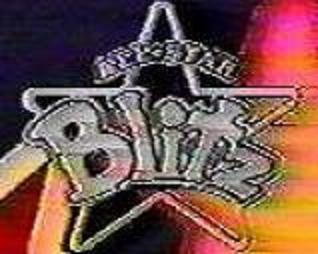 All-Star Blitz is an American game show that aired on ABC from April 8 to December 20, 1985, with reruns airing on the USA Network from March 31 to December 26, 1986. Peter Marshall was the host and John Harlan was the announcer for the series, which was produced by Merrill Heatter Productions, in association with Peter Marshall Enterprises. The show featured a four-celebrity panel, and was similar to Heatter's other productions Hollywood Squares and Battlestars. In All-Star Blitz, the celebrities are asked questions by the host, and the contestants judge the truth of their answers in order to uncover a hidden word puzzle that they have to solve.

Who Wants to Be a Millionaire? is a British television quiz show, created and produced by David Briggs, and made for the ITV network. On air since September 1998 and devised by Briggs, the show's format sees contestants taking on multiple-choice questions based upon general knowledge, winning a cash prize for each question they answer correctly, with the amount offered increasing as they take on more difficult questions. To assist each contestant who takes part, they are given lifelines to use, may walk away with the money they already have won if they wish not to risk answering a question, and are provided with a safety net that gives them a guaranteed cash prize if they give an incorrect answer, provided they reach a specific milestone in the quiz. 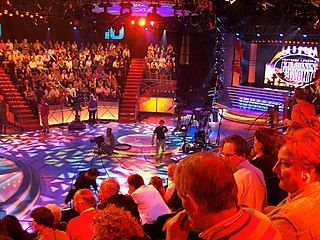 Miljoenenjacht, officially Postcode Loterĳ Miljoenenjacht, is a Dutch game show, sponsored by the country's postcode lottery, where a contestant and at-home viewer could win up to €5,000,000 or as little as €0.01. The show is broadcast at various times, spanning across six episodes for each set. The program was originally shown by TROS on NPO 2, but moved to creator John de Mol's channel Tien in 2005. After the channel was discontinued after its sale to the RTL Group, the program moved to RTL 4.

Temptation was an Australian game show which premiered on the Nine Network on 30 May 2005. Hosted by Ed Phillips and Livinia Nixon, the show was a remake of Sale of the Century, which aired on Nine in the same timeslot for more than twenty years between 1980 and 2001. Temptation had the same general format of its predecessor, but with several new features and a deemphasis on the "shopping" aspects of the endgame. The show ran until 30 November 2007, when it was placed on hiatus by the network following strong competition from game show Deal or No Deal on the rival Seven Network; during the hiatus, Nine filled the timeslot with episodes of the American sitcom Two and a Half Men. When Ed Phillips made an appearance on The NRL Footy Show he announced "maybe summer" would be the return of the show. This statement was accurate, as Temptation returned for a shortened fourth series from 1 December 2008 with unaired episodes which were recorded during 2008. During that time, Ed Phillips was dumped by the Nine Network after his contract expired in November, and Temptation never returned to the schedule. After 23 January 2009, when the show's final episode aired, all Temptation websites were removed, and Two and a Half Men returned to Channel Nine's 7:00pm schedule.

Grasz czy nie grasz is the Polish version of Deal or No Deal. It was shown at 7:00pm CET on Saturdays on Polsat. Zygmunt Chajzer was the original host. In its third year, the studio and graphics were updated, as they were to other international versions of the show.

$ale of the Century is an Australian game show that aired on the Nine Network from 14 July 1980 to 29 November 2001. Tony Barber hosted a game show with essentially the same format under the title The $25,000 Great Temptation from 1970–76, and was also the initial host of Sale for over a decade before being replaced by Glenn Ridge in 1991.

The Vault is a game show created in Israel, by Erez Tal. It was later a British hit on ITV, running from 2002 until 2004. It was hosted by Davina McCall, Melanie Sykes and Gabby Logan. Logan stepped in for Sykes on 6 July 2004 when she went on maternity leave partway through Series 3 due to her pregnancy.

Wer wird Millionär? is a German game show based on the original British format of Who Wants to Be a Millionaire?. The show is hosted by Günther Jauch. The main goal of the game is to win €1 million by answering 15 multiple-choice questions correctly. Wer wird Millionär? has been broadcasting from 3 September 1999 until today. It is shown on the German TV station RTL on Mondays and Fridays at 20:15 (UTC+1). If contestants get the fifth question correct, they will leave with at least €500. If they get the tenth question correct, they will leave with at least €16,000, unless they enabled the fourth lifeline.

Panahon Ko 'to!: Ang Game Show ng Buhay Ko was a Philippine trivia game show broadcast by ABS-CBN, hosted by the duo Luis Manzano and Billy Crawford from Pilipinas Got Talent. The program premiered on June 28, 2010, and originally aired every weekday afternoons from 5:00 PM to 5:30 PM on the network's Hapontastic afternoon block. On September 27, 2010 onwards, the program moved its timeslot to weekday mornings from 10:30 AM to 11:00 AM on the network's Umaganda morning block. The game show ended on November 26, 2010.

101 Ways to Leave a Game Show is an American game show hosted by Jeff Sutphen. The series premiered on June 21, 2011, on ABC and ran for six episodes.

The Main Event was a weekly hour-long Australian Game Show that aired on the Seven Network from 1990 to 1992. The show was hosted by Larry Emdur, with Don Blake and Niel Chantler as announcers.