Donnelly was born in Glasgow, where he began his career with Radio Clyde in the 1970s, presenting the top-rated Mid Morning Show from 1979 [1] until 1992. He also presented a Dougie Donnelly File show on Sunday evenings in 1987 through to 7 August 1988 which reviewed a famous musician/band each week. He was twice voted Scottish Radio Personality of the Year. Towards the end of his time, he mostly presented on Clyde 1 and occasionally presented on Clyde 2.

He joined BBC Scotland's Sports Department in 1980, [1] presenting programmes such as Sportscene Live (which includes events such as the Scottish Cup Final and Scotland internationals), Grandstand from Scotland, Afternoon Sportscene, the network's rugby union coverage, and football World Cups in 1990 and 1998. He presented two series of a TV chat show, Friday Night with Dougie Donnelly directed by Martin Cairns, and was TV Personality of the Year in Scotland in 1982. He left the BBC after the 2010 Scottish Cup Final, his 30th in a row, and is currently[ when? ] lead commentator on European Tour Productions' worldwide live TV coverage of golf's European Tour, travelling to around 20 tournaments a year around the world.

Donnelly was known outside Scotland by his involvement in the BBC's networked output of golf, darts, snooker and bowls. [1] He was the first Scot to present the Grandstand programme on the network, which he did on a regular basis between 1992 and 2002. International exposure also saw Donnelly serve as commentator/presenter for the World's Strongest Man during the 1980s on ITV.

He covered four Commonwealth Games, four Summer Olympic Games and three Winter Olympic Games, where, in the 2002 event at Salt Lake City, he commentated on the British women curlers' Gold victory. He has also hosted quiz shows on radio and TV and has appeared on The Weakest Link , Ready Steady Cook , Banzai and The Games . In addition, he provided a voice over on the Sky One science entertainment show Brainiac: Science Abuse ; solely for the "Brainiac Golf" sketch when a caravan is blown up; detonated by a fuse triggered by a professional golfer's putting stroke.

In February 2016, it was announced that Donnelly would become a columnist for bunkered golf magazine, writing a column in every edition. [2]

He is also an after-dinner speaker and awards host.

Donnelly was raised in Rutherglen, [3] [4] educated at the former Hamilton Academy and is a graduate of the University of Strathclyde Law School. He was chairman of the Scottish Institute of Sport from 2005-2008, and currently[ when? ] chairs the Scottish Commonwealth Games Endowment Fund. He is a fan of Clyde F.C. [3] [4]

For several years he appeared in television adverts for the furniture store Sterling, based in Tillicoultry, near Stirling. He returned to advertising for I&K Motors, and provided voiceovers for their spring 2008 advertising campaign. [3]

Grandstand is a British television sport programme. Broadcast between 1958 and 2007, it was one of the BBC's longest running sports shows, alongside BBC Sports Personality of the Year. 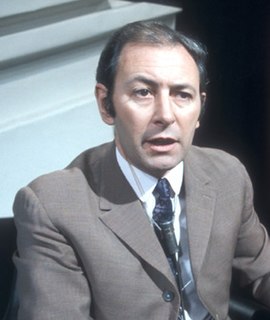 David Robert Coleman OBE was a British sports commentator and TV presenter who worked for the BBC for 46 years. He covered eleven Summer Olympic Games from 1960 to 2000 and six FIFA World Cups from 1962 to 1982.

The BBC Scotland Sports Personality of the Year was an annual sport award in Scotland. It was organised by BBC Scotland.

William Woods is an Australian television journalist, radio and television broadcaster, and author. He is best known as the presenter, alongside Sandra Sully, of Network Ten's Ten News at Five in Sydney and Sports Tonight. He co-hosted Bill & Boz on Fox Sports News.

John Helm is an English sports commentator, who has commentated on football, golf, cricket and rugby league both for ITV and other broadcasters.

Rugby Special was the main rugby union programme on the BBC in the UK. The show ran from 1966 and past presenters included David Vine, Keith Macklin, Cliff Morgan, Chris Rea, Nigel Starmer-Smith, Bill Beaumont and John Inverdale. In the early seventies, the theme tune was "Spinball" by Paddy Kingsland but this was later replaced by "Holy Mackerel" by The Shadows' drummer, Brian Bennett which was replaced for one season 1988–89 by the Kenny G version of "What Does It Take " from the 1986 Duotones album replaced from 1989–90 to 1993–94 by a specially commissioned theme. From 1994–95 the programme was contracted out to an independent production company Chrysalis after 28 years as an in-house BBC production. The programme ended its original run in 1997 after losing the rights to cover English domestic games, the Heineken Cup and England home tests to SKY and Welsh domestic matches to HTV/S4C the S4C involvement was controversial as BBC Wales was providing much of S4C's Welsh Language sports coverage under the BBC Cymru brand and was along with Ski Sunday merged into Sunday Grandstand in November 1997 when Sunday Grandstand became a year-round programme the first edition of the all year round Sunday Grandstand on 16 November 1997 featured live coverage of Wales v Tonga. Though in 1992 and 1993 the programme was integrated into special editions of Sunday Grandstand featuring the Formula 1 South African Grand Prix and European Grand Prix at Donington Park. The programme returned on late Thursday nights in 2002 but was discontinued in 2005, when it was a highlights programme of Autumn internationals and Six Nations with studio guests and an audience of fans from the Six Nations.

Sportscene is the name of a range of Scottish sports television programmes produced by BBC Scotland.

ABC Radio Grandstand is a live radio sports focused commentary and talk-back program which runs on the Australian Broadcasting Corporation local radio network across Australia and on one digital-only station. The program runs on Saturdays and Sundays, typically from noon or an hour before, until 6 pm. Sports that are covered by ABC Radio under the Grandstand banner include Test and One Day International cricket, rugby league, the Summer Olympics, Australian Football League games, Australian Open tennis and soccer matches, including games involving the Socceroos and the A-League competition. However, when there are major football, cricket or tennis matches in progress, or the Olympics and Commonwealth Games, the coverage is often continued for the entirety of the relevant time frame if Grandstand is broadcasting the competition, as opposed to simply reporting the results. This can result in broadcasts in the early hours of the morning if Australia is playing in a cricket Test on another side of the world.

Alison Mitchell is an English cricket commentator and sports broadcaster. She was the first woman to become a regular commentator on the BBC's Test Match Special, and has been commentating on men’s and women’s international cricket around the world since 2007. She also spent many years reporting and commentating on a variety of sports for BBC Radio 5 Live and Five Live Sports Extra, including Olympic and Commonwealth Games, Wimbledon, Australian Open, French Open and Open Golf. In March 2014, she was voted SJA Sports Broadcaster of the Year 2013 by members of the Sports Journalists' Association. She is also the first woman to have called men's cricket ball-by-ball on ABC Radio Grandstand in Australia.

Archibald "Archie" Macpherson is a Scottish football commentator and author.

This is a timeline of the history of BBC Sport.