Last updated April 22, 2021
Not to be confused with Jakob Haugaard.

Jacob Haugaard is a well-known performer in Denmark for many years, mixing comedy, singing and music in his own particular style. He is usually dressed in an everchanging range of gaudy suits, and often plays his home-made guitar. He has recorded many music records and CDs since 1977. [3]

Haugaard has also produced radio, films and TV, mostly comedy and sketches and has a long history of close cooperation with comedian and entertainer Finn Nørbygaard, since 1984. They performed as the Finn & Jacob duo for many years. Haugaard lived in Malling near Aarhus for many years, where he ran his own TV-station from a disused watertower in his backyard, until he got elected in 1994.

In his younger days, Haugaard was a frontman of the SABAE association for many years since the late 1970s. SABAE is an abbreviation of Sammenslutningen Af Bevidst Arbejdssky Elementer, translating as "Union of Deliberate Work-avoiding Elements", [4] and included several academics and journalists as both founding and active members. The organisation was meant partially as a joke, but with a critical edge towards the modern capitalist society, and especially the labour market. They found inspiration in both Marxist and anarchist theories. SABAE's best known slogan was "if work is healthy, give it to the sick!". [5]

Haugaard ran for every parliamentary election as a joke from 1979 onwards, until he won in 1994. He ran without a party (representing SABAE) and got 23,253 votes in 1994, enough for a seat and he became a member of the Parliament of Denmark from 1994–98. After his term expired, he decided not to seek re-election. Among his outrageous campaign promises were: 8 hours of free time, 8 hours of rest and 8 hours of sleep; more tailwind on bicycle paths; promises of better weather; right to impotency; Nutella in field rations (which was actually implemented); and shorter queues in supermarkets. [6] [7] Asylum rated his win in the parliamentary election the 11th greatest prank of all time. [7] When his portrait was hung in the parliament, Haugaard commented that it should serve as a warning that any idiotic populist might get elected.

Aarhus is the second-largest city in Denmark and the seat of Aarhus municipality. It is located on the eastern shore of Jutland in the Kattegat sea and approximately 187 kilometres (116 mi) northwest of Copenhagen.

Sir Kenneth Arthur Dodd was an English comedian, singer and occasional actor. He was described as "the last great music hall entertainer", and was primarily known for his live stand-up performances. 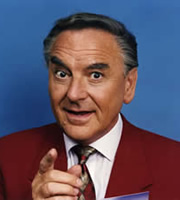 Robert Alan Monkhouse was an English entertainer and comedian. He was well known as a host of television game shows, including The Golden Shot, Celebrity Squares, Family Fortunes and Wipeout. 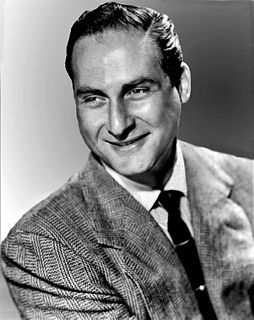 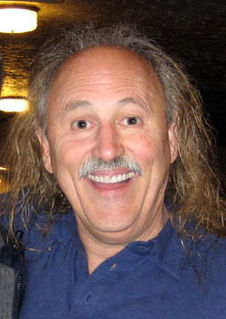 Leo Anthony Gallagher Jr., known mononymously as Gallagher, is an American comedian known for smashing watermelons as part of his prop comedy act.

Tough Crowd with Colin Quinn is a comedic talk show which aired on Comedy Central from 2002 to 2004. The show featured host Colin Quinn and a panel of comedian guests, discussing politics, current events, and social issues.

The Jamie Kennedy Experiment is a half-hour-long American hidden camera/practical joke reality television series that debuted in 2002 and was broadcast on The WB. The host and star of the show is Jamie Kennedy, a comedian who presented a reality TV format which combined hidden camera with sketch comedy. The show was a production of Bahr-Small Productions in association with Warner Bros. Television and Big Ticket Television and ran from January 13, 2002 until April 29, 2004.

Lee Hurst is an English comedian.

The Union of Conscientiously Work-Shy Elements was an unusually successful frivolous political party in Denmark. It was founded in Aarhus in 1979 by a comedian, Jacob Haugaard, and a few friends. Haugaard stood as a candidate in Aarhus in each parliamentary election, until September 1994 when he was very unexpectedly elected to the Folketing with 23,253 personal votes, thereby winning a "kredsmandat".

Casper & Mandrilaftalen, also known as Mandrilaftalen or Mandrillen, is a Danish dadaist and satirical cult television sketch show that originally aired on DR2 from March 1st, 1999, to November 19th, 1999, across two seasons, comprising a total of 67 episodes. The Mandrilaftalen troupe consisted of Danish comedians Casper Christensen, Lasse Rimmer, Lars Hjortshøj and Frank Hvam. Heavily inspired by British humor, the show became known for its eccentric characters and absurd sketches, leading to multiple TV critics comparing it To Monty Python's Flying Circus. The show is of a talk show format and is hosted by the character Casper, who is a fictionalization of and is played by the program's creator, Christensen. As the star of the show, Casper usually sits at his desk while satirizing the Danish media industry and interviewing fictional guests. Surreal nonsense is a recurrent characteristic of the show, an example being the character Broder Salsa, who folds carpets to resemble great state leaders and sorts capital cities by muesli. In the show, Casper also holds talent shows with fictional participants, presents episodes of fictional TV series and displays advertisements for fictional products. Rimmer, Hjortshøj and Hvam plays an array of various characters, and the show had guest appearances from other Danish comedians, the British Monty Python member John Cleese, the Danish actress Susse Wold, the rapper Al Agami, among others. More than 250 different named fictional characters appear in the show, with Broder Salsa, Svenne O'Lotta and Gentleman Finn being the most popular characters according to Christensen.

TV's Bloopers & Practical Jokes is an American television series. Debuting as a weekly series, new episodes have been broadcast as infrequent specials during most of its run. It premiered on NBC in 1984, moved to ABC in 1998, and was revived in syndication in 2012. The NBC run of the series was co-produced by Carson Productions and Dick Clark Productions, and the ABC and syndication runs have been produced solely by Dick Clark Productions. 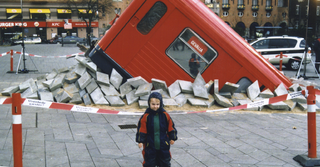 April Fools' Day or April Fool's Day is an annual custom on April 1 consisting of practical jokes and hoaxes. Jokesters often expose their actions by shouting "April Fool!" at the recipient. Mass media can be involved in these pranks, which may be revealed as such the following day. The day is not a public holiday in any country except Odessa, Ukraine, where the first of April is an official city holiday. The custom of setting aside a day for playing harmless pranks upon one's neighbour has been relatively common in the world historically. 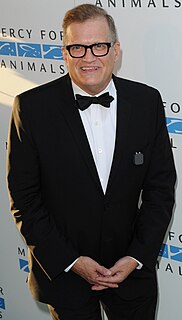 Drew Allison Carey is an American actor, comedian, and game show host. After serving in the U.S. Marine Corps and making a name for himself in stand-up comedy, he gained stardom in his own sitcom, The Drew Carey Show, and as host of the U.S. version of the improv comedy show Whose Line Is It Anyway?, both of which aired on ABC. He then appeared in several films, television series, music videos, a made-for-television film, and a computer game. He has hosted the game show The Price Is Right since August 15, 2007 on CBS.

Simon Benjamin Brodkin is an English comedian, performing both on the stand-up circuit and in comedy television series. He is best known for playing a cheerful chav character called Lee Nelson, but also performs as other comedy characters, such as a Liverpudlian footballer called Jason Bent. Performing solo stand-up since 2004, he has also written for and appeared on the television shows Al Murray's Multiple Personality Disorder in 2009, Lee Nelson's Well Good Show in 2010 and Lee Nelson's Well Funny People in 2013.

Sjúrður Skaale is a Faroese politician, journalist, actor, singer, and comedian. He is a member of the Social Democratic Party.

Vester Allé Kaserne is a former military barracks and listed building in the city of Aarhus. The barracks was built on the area between Vester Allé, Frederiks Allé and Thomas Jensens Allé in 1875-1878 and was closed in 1969 after which the buildings were taken over by Aarhus Municipality. There are two remaining buildings left from the original complex; the Officersbygningen and Ridehuset. 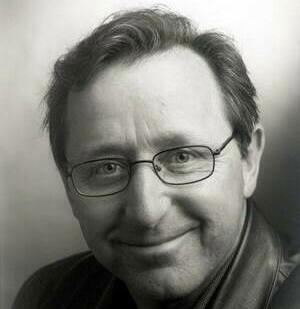 Finn Nørbygaard is a Danish actor, entertainer, musician and psychotherapist. Nørbygaard was originally educated as a school teacher but had his breakthrough in a TV role as a bus conductor with Jacob Haugaard wherein they popularized the regional expression Ja-dak. The pair also made the Jydekompagniet movies and acted in popular TV-commercials for Tuborg Squash. Another of Nørbygaards successes was the comedy/music show Musik og Fis in 1994 which he made with the singer Jette Torp. The show also became known as Finn og Jette Show. 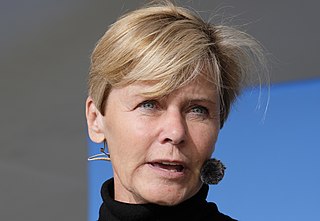 Mette Bock is a Danish political scientist, journalist and former politician from the party Liberal Alliance

Rasmus Paludan is a Danish-Swedish politician and lawyer. He is the leader of the far-right political party Hard Line, which he founded in 2017. He is the older brother of poet Tine Paludan and writer Martin Paludan. Paludan himself has a migration background as his father is Swedish journalist Tomas Polvall and he has lived in Sweden at times, which according to himself gives him the right to Swedish citizenship. In October 2020 Paludan was officially declared a Swedish citizen by authorities as his father is Swedish.