St. James was notorious for a lifestyle of excess that included heavy drug use, partying, and bizarre costumes that first brought him to national attention as the subject of television appearances and interviews. He wrote Disco Bloodbath (now published under the title Party Monster) that was later made into the feature film Party Monster (2003), starring Macaulay Culkin as Michael Alig and Seth Green as St. James. His life was the subject of the documentary Party Monster: The Shockumentary (1998).

James grew up in an affluent family in Saginaw, Michigan, where he lived with his mother after his parents divorced.[ citation needed ] In the summer, he would stay with his father and younger and older siblings in Fort Lauderdale, Florida, until he moved to Fort Lauderdale for high school. [2] After reading Andy Warhol's book Popism: The Warhol Sixties , St. James moved to New York City in 1984, where he studied performance art at New York University for two years before being absorbed into New York's club scene. St. James lived a celebutante lifestyle after becoming a close friend of nightlife icon and columnist Michael Musto.

In the late 1980s, St. James became friendly with Michael Alig, although at first he and the other club personalities shunned the newcomer. [3] Undeterred, Alig soon created his own scene by gathering up other creative personalities of the nightlife world; he used his flamboyant style, and engaged in self-promotion and innovative themed parties. St. James morphed from celebutante to Club Kid while helping Alig create the new scene. Alig and St. James threw many parties together, eventually setting up the Disco 2000 club night at the New York City club The Limelight. St. James wrote several columns, most famously for the short-lived New York City-based gay publication OutWeek during the magazine's two year life span, from 1989–1991. [4] St. James appeared many times on television talk shows to discuss the Club Kids during the 1980s and 1990s, including The Oprah Winfrey Show , The Phil Donahue Show , The Jerry Springer Show , Geraldo , and the Joan Rivers Show .

St. James published a second book, Freak Show in 2007, a comedy/romance about a teenage drag queen who attends a new school and forges a relationship with the football team's quarterback. Freak Show was named to the American Library Association Best Books for Young Adults list. [6] The book was adapted into a feature in 2017 by Maven Entertainment. The film was directed by Trudie Styler, and stars Alex Lawther, Abigail Breslin, and Bette Midler. [7]

In the 2000s St. James has made regular appearances on America's Next Top Model , cycles 5, 7, & 11, presenting contest skill challenges to the aspiring models. St. James also appeared in season 2, episode 9 of RuPaul's Drag Race, where he interviewed the top four contestants on a red carpet before they walked the runway.

Lady Bunny, originally known as "Bunny Hickory Dickory Dock," is an American drag queen, nightclub DJ, promoter and founder of the annual Wigstock event. She has also released disco singles such as "Shame, Shame, Shame!" and "The Pussycat Song". 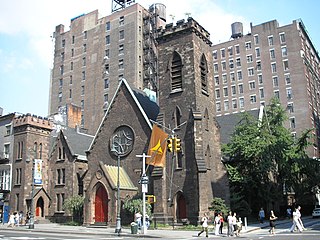 The Limelight was a chain of nightclubs that were owned and operated by Peter Gatien. The Limelight had locations in New York City, Chicago, Atlanta, London and Hallandale.

Party Monster is a 2003 American biographical drama film directed by Fenton Bailey and Randy Barbato, and starring Macaulay Culkin as the drug-addled "king of the Club Kids". The film tells the story of the rise and fall of the infamous New York City party promoter Michael Alig. This was Macaulay Culkin's first film in nearly nine years since his starring role in the 1994 film Richie Rich. 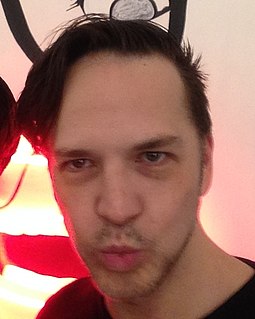 Michael Alig is an American convicted killer who served almost 17 years in prison for manslaughter; a former club promoter, musician, and writer, Alig was a founder and ringleader of the Club Kids – a group of young New York City clubgoers that became a cultural phenomenon during the late 1980s and early 1990s.

Michael Musto is an American journalist who has long been a prevalent presence in entertainment-related publications, as well as on websites and television shows. Musto is a former columnist for The Village Voice, where he wrote the La Dolce Musto column of gossip, nightlife, reviews, interviews, and political observations. He is the author of the books Downtown and Manhattan on the Rocks, as well as a compilation of selected columns published as La Dolce Musto: Writings By The World's Most Outrageous Columnist and a subsequent collection, Fork on the Left, Knife in the Back.

The Club Kids were a group of young New York City dance club personalities first established by Michael Alig, James St. James, Julie Jewels, DJ Keoki and Ernie Glam in the late 1980s, and throughout the 1990s would grow to include Amanda Lepore, Waltpaper, Christopher Comp, It Twins, Jennytalia, Desi Monster, Kabuki Starshine and Richie Rich, among others. The group was notable for its members' flamboyant behavior and outrageous costumes. In 1988, writer Michael Musto wrote about the Club Kids' "cult of crazy fashion and petulance": "They ... are terminally superficial, have dubious aesthetic values, and are master manipulators, exploiters, and, thank God, partiers."

Larry Tee is a Berlin-based DJ, club promoter, and music producer who curated the electroclash scene in New York in the early 2000s, and helped launch the careers of such artists as RuPaul, Scissor Sisters, Fischerspooner, Peaches, W.I.T., and Avenue D. He has written songs for and collaborated with Afrojack, Shontelle, Princess Superstar, Santigold, RuPaul, Sean Garrett, Steve Aoki, and Amanda Lepore.

Disco Bloodbath: A Fabulous but True Tale of Murder in Clubland is a 1999 memoir written by James St. James about his life as a Manhattan celebutante and club kid. The book specifically chronicles his friend Michael Alig's rise to fame, and Alig and his roommate's subsequent murder of fellow club kid and drug dealer Andre "Angel" Melendez. St. James was Alig's mentor, rival, and collaborator in the Manhattan party scene, and was familiar with many of its key figures. The memoir was later retitled Party Monster, after the 2003 motion picture of that name starring Macaulay Culkin, Seth Green, Chloë Sevigny, and Marilyn Manson. 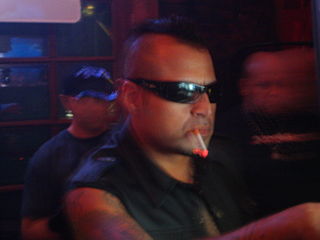 George Lopez, known by his stage name DJ Keoki or Keoki Franconi, is a Salvadoran-American electronic musician, among other genres, DJ. Born in El Salvador and raised in Hawaii, Keoki began advertising himself as "superstar" shortly after moving to New York City.

Andre Melendez, better known as Angel Melendez, was a member of the Club Kids and purported drug dealer who lived and worked in New York City. He was murdered by Michael Alig and Robert "Freeze" Riggs on March 17, 1996.

Tunnel was a nightclub in New York City, located at 220 Twelfth Avenue, in the Chelsea neighborhood of Manhattan, New York City. It operated from 1986 to 2001.

A subway party is a celebration that occurs on a mass transit system. Generally, people meet at a predetermined station in their city's mass transit system, wait until their numbers have achieved critical mass, and board the train. From there, revelers may engage in many different activities, from playing music and dancing to exchanging gifts.

Peter Gatien is a Canadian club owner and party promoter. He is best known as the former owner of several prominent New York City nightclubs, including Club USA, The Limelight, Palladium, and Tunnel.

Party Monster may refer to: 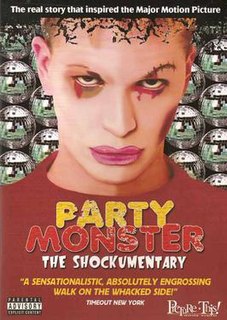 Party Monster: The Shockumentary is a 1998 documentary film detailing the rise of the club kid phenomenon in New York City, the life of club kid and party promoter Michael Alig, and Alig's murder of fellow club kid and drug dealer Andre "Angel" Melendez. It was directed by Fenton Bailey and Randy Barbato.

Famous for being famous is a pejorative term for someone who attains celebrity status for no clearly identifiable reason and appears to generate their own fame, or someone who achieves fame through a family or relationship association with an existing celebrity.

World of Wonder Productions is a production company founded in 1991 by filmmakers Fenton Bailey and Randy Barbato. Based in Los Angeles, California, US, the company specializes in documentary television and film productions, with credits including the Million Dollar Listing docuseries, RuPaul's Drag Race, and documentary films Mapplethorpe: Look at the Pictures (2016), and The Eyes of Tammy Faye (2000). 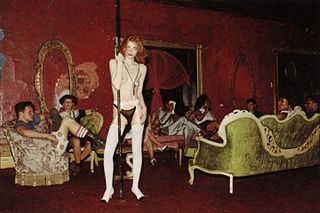 The World was a large nightclub in New York City, which operated from the mid-1980s until 1991 at 254 East 2nd Street, in Manhattan's East Village neighborhood. The venue, which included a secondary establishment called "The It Club," was housed in a former catering hall and theater. The World attracted a clientele that was economically, racially, and sexually diverse, and included artists, celebrities, and fashion designers, such as Keith Haring, Madonna, Brooke Shields, Prince, Stephen Sprouse, RuPaul, and Carolina Herrera, together with banjee boys and members of voguing houses

Screamin' Rachael, a Chicago native, was born Rachael Cain. Dubbed the “Queen of House Music” by Billboard magazine, Rachael has loosely been connected to the evolution of the House music genre. Trax Records was co-founded by Jesse Saunders, known as "The Originator of House Music", and Chicago vinyl manufacturer Larry Sherman, but Rachael was able to seize control of the label decades later. She has worked with artists such as Grandmaster Melle Mel, Marshall Jefferson, Colonel Abrams, Afrika Bambaataa, and many others.