John Frohnmayer (born June 1, 1942) is a retired attorney from the U.S. state of Oregon. He was the fifth chairman of the National Endowment for the Arts, a program of the United States government. He was appointed by President George H. W. Bush in 1989, and served until 1992.

In 1966, Frohnmayer joined the United States Navy and served as an engineering officer on USS Oklahoma City. In 1980, Frohnmayer retired from the military. [1]

President George H. W. Bush appointed Frohnmayer to chair the National Endowment for the Arts in 1989. The NEA was in the midst of controversies surrounding its funding of various projects, notably those of Robert Mapplethorpe, which would lead to Congressional action and a United States Supreme Court decision in 1998, National Endowment for the Arts v. Finley . Frohnmayer's focus on art education was largely overshadowed by the contentious partisan politics surrounding the agency.

Under pressure from the Religious Right, and Pat Buchanan in particular, Frohnmayer was asked to resign in 1992. [6]

Frohnmayer published two books in the 1990s: Leaving Town Alive, an account of his experience at the NEA, and Out of Tune: Listening to the First Amendment, a text for high school and college courses.

Frohnmayer is an Affiliate Professor of Liberal Arts at Oregon State University. [7]

In sports, Frohnmayer is an elite rower with Corvallis Rowing Club in Oregon. [8]

On September 12, 2007, Frohnmayer announced that he would run for the United States Senate representing Oregon, running as a candidate of the Independent Party of Oregon. [9] for the seat formerly held by Republican Gordon Smith. He dropped out of the race on June 10, 2008, citing fundraising problems. [10] Smith lost the Senate election to Jeff Merkley, a Democrat who was cross-nominated by the Independent Party after Frohnmayer quit the race.

In 1967, Frohnmayer married Leah Thorpe. They have two sons, Jason and Aaron. Frohnmayer and his family live in Jefferson, Oregon. [1] 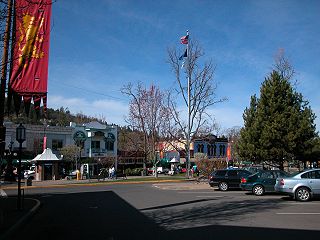 Ashland is a city in Jackson County, Oregon, United States. It lies along Interstate 5 approximately 16 miles (26 km) north of the California border and near the south end of the Rogue Valley. The city's population was 20,078 at the 2010 census and was estimated to be 21,281 as of 2019.

Medford is a city in, and the county seat of, Jackson County, Oregon, in the United States. As of July 1, 2019, the city had a total population of 83,072 and a metropolitan area population of 217,479, making the Medford MSA the fourth largest metro area in Oregon. The city was named in 1883 by David Loring, civil engineer and right-of-way agent for the Oregon and California Railroad, after Medford, Massachusetts, which was near Loring's hometown of Concord, Massachusetts. Medford is near the middle ford of Bear Creek.

Oregon State University (OSU) is a public research university in Corvallis, Oregon. The university offers more than 200 undergraduate degree programs along with a variety of graduate and doctoral degrees. With a student enrollment approaching 32,000, it is Oregon's largest university. More than 230,000 students have graduated from OSU since its founding. The Carnegie Foundation designates Oregon State University as a "Community Engagement" university and classifies it as a doctoral university with a status of "Highest research activity". 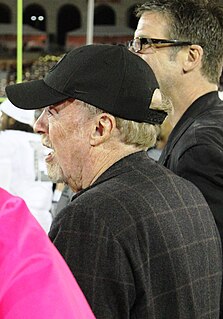 Philip Hampson Knight, is an American billionaire businessman and philanthropist. He is the co-founder and chairman emeritus of Nike, Inc., and was previously chairman and CEO of the company. As of October 2019, Knight was ranked by Forbes as the 21st richest person in the world, with an estimated net worth of US$37.6 billion. He is also the owner of the stop motion film production company Laika. 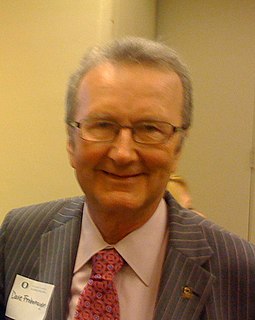 David B. "Dave" Frohnmayer was an American attorney, politician, and university administrator from Oregon. He was the 15th president of the University of Oregon (UO), serving from 1994 to 2009. His tenure as president was the second-longest after John Wesley Johnson. He was the first native Oregonian to run the UO. Frohnmayer previously served as Oregon Attorney General from 1981 to 1991, and subsequently served as dean at the University of Oregon School of Law before serving as president of the university. He served in an "of counsel" attorney role with the Oregon law firm, Harrang Long Gary Rudnick P.C.

The "NEA Four", Karen Finley, Tim Miller, John Fleck, and Holly Hughes, were performance artists whose proposed grants from the United States government's National Endowment for the Arts (NEA) were vetoed by John Frohnmayer in June 1990. Grants were overtly vetoed on the basis of subject matter after the artists had successfully passed through a peer review process. John Fleck was vetoed for a performance comedy with a toilet prop. The artists won their case in court in 1993 and were awarded amounts equal to the grant money in question, though the case would make its way to the United States Supreme Court in National Endowment for the Arts v. Finley. In response, the NEA, under pressure from Congress, stopped funding individual artists.

John Fleck is an American actor and performance artist. He has performed in numerous TV shows, including Carnivàle, Murder One, and the Star Trek franchise. He also appeared in Howard The Duck, Waterworld and the music video for the ZZ Top song "Legs". He made a minor appearance in the Seinfeld episode "The Heart Attack". He played a minor character during the sixth season of Weeds. He wrote and performed "Mad Women" at La MaMa E.T.C.

Jason Atkinson is an American politician in the US state of Oregon. The Republican grew up in the Southern Oregon city of Ashland. He served as a senator in the Oregon State Senate from 2001 to 2013. He ran unsuccessfully for the Republican nomination for Governor of Oregon in 2006. He stated his intention to run in the 2010 Oregon gubernatorial election, but withdrew from the race in 2009. 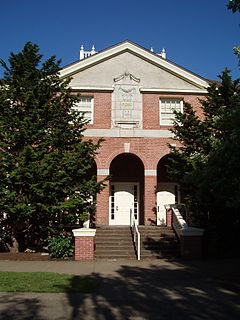 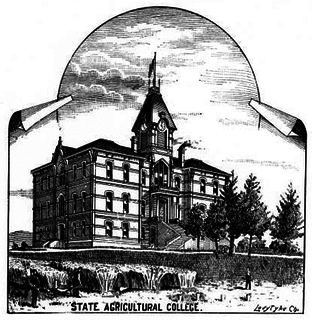 The history of Oregon State University in Corvallis, Oregon, United States, began in the era of the Oregon Territory. At first a private school, the college later became a state supported agricultural institution. Nineteen presidents have led the school over the years while the school has been transformed from a single building to a campus of 577 acres (2.34 km2) and approximately 30,000 students in 2015.

The Oregon Arts Commission is a governor-appointed body of nine commissioners who allocate grants for artists based in the U.S. state of Oregon. It receives the bulk of its funding through the National Endowment for the Arts, the state, and the Oregon Cultural Trust. The commission provides funding for local artists through their fellowship programs.

Frank Morse is a politician in the U.S. state of Oregon. A Republican, he represented District 8 in the Oregon State Senate from 2003 until 2012. He was first elected in 2002, defeating Democrat Barbara Ross in a high-profile race, and was reelected in 2006 and 2010. In September 2012, Morse resigned his office, stating that it was "time for new energy" in the position. 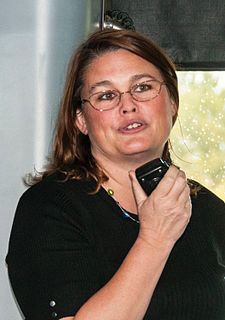 Sara Gelser is a Democratic American politician from Oregon.

Frederick Manson White, commonly known as F. Manson White, was an American architect based in Portland, Oregon. White was known for his work in the Richardsonian Romanesque style. Among the buildings he helped design, as part of the firm McCaw, Martin and White, or designed as a sole practitioner, are the National Register of Historic Places-listed Imperial Hotel, Waldschmidt Hall at the University of Portland, the Dekum Building, the Auditorium and Music Hall, the Sherlock Building, the Flatiron Building, Woodrow Wilson Junior High School and The John G. Shedd Institute for the Arts in Eugene, the First Presbyterian Church in Medford, and the Corvallis Hotel in Corvallis. White also designed Agate Hall on the campus of the University of Oregon, and the Central Presbyterian Church in Portland.

Harry Dolan Boivin was an American lawyer and politician. He was a member of the Oregon House of Representatives for four terms, from 1935 through 1942. He also served in the Oregon State Senate from 1955 to 1972. He held the position of Speaker of the House during the 1937 legislative session, and was President of the Oregon Senate during the 1961 and 1965 sessions. Boivin was known as "The Fox" for his expertise in parliamentary procedures and ability to build coalitions within legislature. For almost a decade in the 1960s and early 1970s, Boivin and a small group of rural conservative Democrats joined Republicans to control the state senate.

National Endowment for the Arts v. Finley, 524 U.S. 569 (1998), was a United States Supreme Court case in which the Court ruled that the National Foundation on the Arts and Humanities Act, as amended in 1990,, was facially valid, as it neither inherently interfered with First Amendment rights nor violated constitutional vagueness principles. The act in question required the Chairperson of the National Endowment for the Arts (NEA) to ensure that "artistic excellence and artistic merit are the criteria by which [grant] applications are judged, taking into consideration general standards of decency and respect for the diverse beliefs and values of the American public". Justice O'Connor delivered the opinion of the Court.

David Bowman Nicodemus was a physicist, Physics Professor and Administrator at Oregon State University, and part of the Manhattan Project team.

Gregory McKelvey is an activist, public speaker, and campaign manager. He received his undergraduate degree from Oregon State University in Political Science. Gregory was described as leading the Black Lives Matter protests in Portland, Oregon and has been the subject of extensive media coverage as an organizer of Anti-Trump protests in Portland, Oregon. McKelvey attended Southridge High School in Beaverton, Oregon where he ran on the Track team.