Santamaria was admitted to legal practice in 1973. In 1977, he took up a full-time position as an academic at Melbourne Law School. In 1978, he was called to the Victorian Bar and was appointed Queen's Counsel in 1994. [1] He practised primarily in commercial law and equity. In August 2013, he joined the Court of Appeal, where he remained until his retirement in July 2018.

Together with Ian Renard, Santamaria is the co-author of Takeovers and Reconstructions in Australia. [2] Between 1978 and 1990, Santamaria was a reporter for the Commonwealth Law Reports .

Santamaria is a son of Australian political activist B. A. Santamaria. [3] 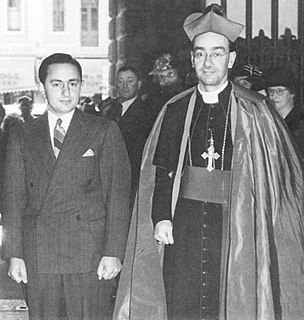 Bartholomew Augustine Santamaria, usually known as B. A. Santamaria, was an Australian Roman Catholic anti-Communist political activist and journalist. He was a guiding influence in the founding of the Democratic Labor Party (DLP).

Sir Zelman Cowen, was an Australian legal scholar and university administrator who served as the 19th Governor-General of Australia, in office from 1977 to 1982. 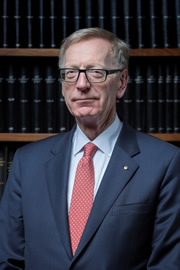 Kenneth Madison Hayne is a former Justice of the High Court of Australia, the highest court in the Australian court hierarchy.

Sir Daryl Michael Dawson, is a former Australian judge who served as a Justice of the High Court of Australia from 1982 to 1997. Before being appointed to the High Court, he served for periods as a legal officer in the Royal Australian Navy and as Solicitor-General of Victoria. 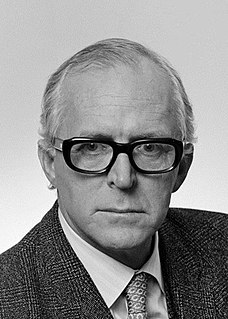 James Robert McClelland was an Australian lawyer, politician, and judge. He was a member of the Australian Labor Party (ALP) and served as a Senator for New South Wales from 1971 to 1978. He briefly held ministerial office in the Whitlam Government in 1975 as Minister for Manufacturing Industry and Minister for Labor and Immigration. He later served as the inaugural Chief Judge of the Land and Environment Court of New South Wales from 1980 to 1985, as well as presiding over the 1984 McClelland Royal Commission into British nuclear tests in Australia. 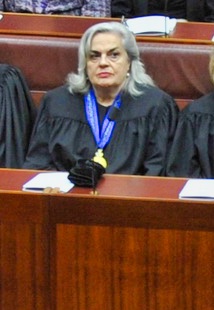 Susan Maree Crennan, is a former Justice of the High Court of Australia, the highest court in the Australian court hierarchy.

Sally Ann Walker is an Australian university administrator and lawyer. She served as the fifth Vice-Chancellor and President of Deakin University (2003–2010) and was the first woman to be appointed to the position.

Christopher Murray Maxwell is an Australian jurist. He succeeded Justice John Winneke as President of the Victorian Court of Appeal on 16 July 2005.

John Andrew Arthur was an Australian lawyer and politician. He was a member of the Australian Labor Party (ALP) and was first elected to federal parliament at the 1913 federal election, after a successful career at the Victorian Bar. After the 1914 election, he was appointed Minister for External Affairs in the Fisher Government. He died of kidney disease three months later, aged 39.

Peter Cadden Heerey AM, QC is a former judge of the Federal Court of Australia. He was a judge of the Court from 1990 to 2009.

Geoffrey Arthur Akeroyd Nettle is a former Justice of the High Court of Australia, the highest court in the Australian court hierarchy, who served from 3 February 2015 to 30 November 2020. Prior to his appointment to the High Court, he served as a judge at the Court of Appeal, Supreme Court of Victoria, where he presided from June 2004 to 2015.

St Patrick's College was an independent Catholic school in Melbourne, Victoria from 1854 until 1968. It was the second independent school and the first Catholic secondary school in Victoria founded with a government grant of £2,500. In 1865, following financial difficulties, it was transferred to the care of the Society of Jesus (Jesuits). The school became immediately important to the intellectual and spiritual life of the Catholic community of Victoria and remained so for its existence.

Suleiman Galadima CFR is a Nigerian jurist and Justice of the Supreme Court of Nigeria.

Andrew Scott Bell is an Australian judge who is the current President of the New South Wales Court of Appeal. He was a Rhodes Scholar for New South Wales, practised as a barrister-at-law, and an adjunct professor at the University of Sydney. Bell is a co-author of Nygh's Conflict of Laws in Australia and was a long term Chair of popular annual Sculpture by the Sea exhibition in Sydney.