At the 2018 Commonwealth Games, Truman won Silver in the team sprint event alongside Ryan Owens and Philip Hindes. [3]

Sir Christopher Andrew Hoy, MBE is a former track cyclist and Racing driver from Scotland who represented Great Britain at the Olympic and World Championships and Scotland at the Commonwealth Games. 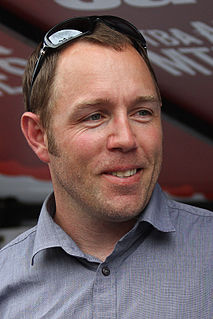 Victoria Louise Pendleton, is a British jockey and former track cyclist who specialised in the sprint, team sprint and keirin disciplines. She is a former Olympic, World, European and Commonwealth champion. With two Olympic gold medals and one silver, Pendleton is one of Great Britain's most successful female Olympians. 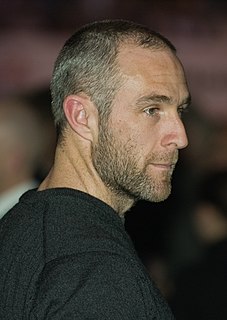 Jamie Alan Staff MBE is an English racing cyclist and coach, formerly on BMX and later on the track. A World and Olympic champion, he has also won numerous other medals at World Championships, World Cups and at the Commonwealth Games.

Craig MacLean MBE is a Scottish track cyclist who has represented Great Britain and Northern Ireland at the 2000 Summer Olympics in Sydney and the 2004 Summer Olympics in Athens, winning a silver medal in the Team Sprint at the 2000 Olympics. As a sighted guide, McLean returned to the sport in its Paralympic form, piloting Neil Fachie to two gold medals in the 2011 UCI Para-cycling Track World Championships, and Anthony Kappes to a gold medal in the 2012 Paralympic Games. MacLean is only the second athlete, after Hungarian fencer Pál Szekeres, ever to win medals at both the Olympic and Paralympic Games. 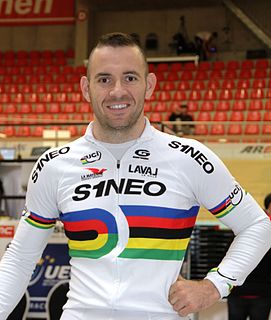 François "Franck" Pervis is a French track cyclist. He is a former junior world champion in the team sprint and twice European under 23 champion, as well as a seven-time world champion and a holder of two world records. In 2014 he became the first track cyclist to win three individual world titles at one championship, in the keirin, 1 km and sprint. 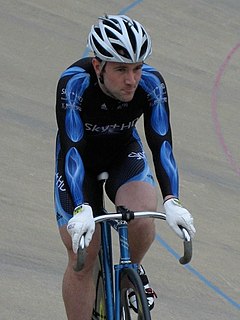 Sir Jason Francis Kenny, is an English former track cyclist, specialising in the individual and team sprints. Kenny is the holder of most Olympic gold medals (7) and medals (9) for a British athlete. His wife, Laura Kenny, holds the same records on the female side, and together they are the most successful married couple in Summer Olympic history where both spouses have won at least one gold medal. Kenny's seven Olympic gold medals place him joint 15th by reference to gold medals won in the Summer Olympic games since 1896.

Matthew "Matt" Nicholas Crampton is an English former track cyclist for Sky Track Cycling. He was a member of British Cycling's Olympic Podium Programme, and represented Great Britain at a number of major events. Crampton specialised in track sprinting and competed in the individual sprint, team sprint, keirin and kilo events. 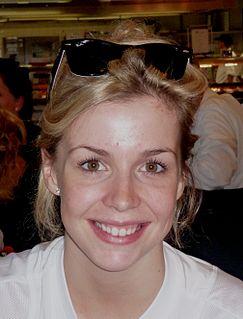 Rebecca Angharad James is a Welsh former professional racing cyclist specialising in track cycling. James was the 2013 world sprint and keirin champion. She is a 2016 Rio Olympics double silver medalist.

Victoria "Vicky" Williamson is an elite British bobsledder and former track cyclist who specialised in the sprint disciplines. In 2013, with Rebecca James, she won the bronze medal in the team sprint at the World Track Cycling Championships.

Dannielle Jade Khan is an English racing cyclist, who currently rides for British amateur team Bianchi Hunt Morvelo. She won the sprint and 500m TT events at the Juniors world championships in 2013, as well as the silver medal in the Keirin. 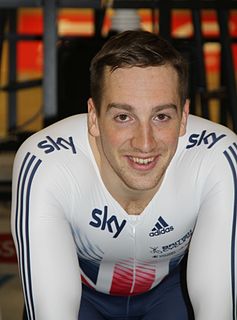 Lewis Oliva is a Welsh racing cyclist from Monmouthshire, Wales, who has ridden on the track for the Welsh Cycling backed professional track team since September 2016. Prior to this he was part of the Great Britain cycling team for eight years as a sprint athlete. 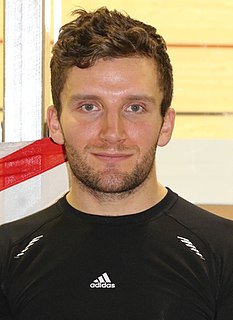 Callum Skinner is a British former track cyclist. He won the silver medal in the individual sprint at the 2016 Summer Olympics, and was a member of the British team that won gold in the team sprint.

Neah Evans is a Scottish professional racing cyclist who rode for Podium Ambition Pro Cycling. In June 2021, Evans was selected as part of Team GB's cycling squad for the postponed 2020 Tokyo Olympics where she won a silver medal in the team pursuit event.

Ryan Owens is a British male track cyclist, representing Great Britain at international competitions. He won a silver medal at the 2020 Tokyo Olympic Games in the Men's Team Sprint alongside Jack Carlin and Jason Kenny 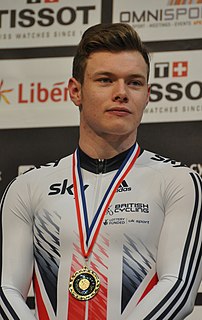 Jack Carlin is a Scottish track cyclist, who competes in sprinting events and won two medals at the 2020 Tokyo Olympics.

Ellesse Andrews is a New Zealand racing cyclist. She competed at the 2020 Summer Olympics, in Women's keirin, winning a silver medal.