Joyce Dunbar (born 6 January 1944) [1] [2] is an English writer. She primarily writes books for children, and has published over seventy books. [3] Dunbar is perhaps best known for Tell Me Something Happy Before I Go To Sleep, This Is The Star, and the Mouse and Mole series. [3] She is the mother of the children's writer-illustrator Polly Dunbar.

Dunbar was born in 1944 in Scunthorpe, Lincolnshire, [2] and is one of four children. [4] Her father was a steel-worker and her mother was a fishing net maker. [4] She grew up in Lincolnshire. [5]

Dunbar attended Goldsmiths College in London, where she received a Bachelor of Arts in English. [2] After that, she did several jobs, working as a nanny, a waitress, a barmaid, and a salesperson. [2] [4] In 1968, she started working as a teacher in a college drama department of Stratford-on-Avon, England. [2] However, due to her gradual loss of hearing, [2] Dunbar had to stop her teaching career and in 1989, she became a full-time writer. [3]

Dunbar has two grown up children: Ben, a fashion photographer and Polly, an author illustrator. [3] [6] Dunbar currently lives in Norwich. [5]

Dunbar published her first children's book at age 35. [5] In 1985, Dunbar published Mundo and the Weather-Child – a novel about the imaginary friend of a deaf child, which helped her become a runner up for the Guardian Fiction Award. [2] In 1990, her book A Bun for Barney was made into an interactive video game by BBC Multimedia Corporation. [2]

In 1998, she wrote Tell Me Something Happy Before I Go To Sleep, which is recommended as a book to help children feel secure. In 2002 Dunbar did a book tour in the United States to promote this book. [3] Her 2005 picture book Shoe Baby, illustrated by her daughter Polly, was made into a puppet show and is part of the 2006 Brighton Festival. [3]

Dunbar most well-known series, Mouse and Mole (illustrated by James Mayhew), has been adapted into a 26-part television animation series by Grasshopper Productions, with voices lent by Alan Bennett and Richard Briers. [3] [7]

Being a person with a hearing impairment, [8] [9] Dunbar has participated in a number of campaigns on behalf of deaf people. In 1998, Dunbar cycled across Cuba in order to raise funds for the National Deaf Children's Society. [4] [7] Her journal Cycle Cuba, a record of this event, was published in 1999. [3] That same year, she had a trip to the Himalayas in support of the founding of a new ashram. [4] Dunbar has also taught English writing for children from Greek island Skyros. [7]

Dunbar is on the steering group for the in the Picture project run by SCOPE, which is about the representation of children with disability in picture books. [10]

Faith McNulty was an American non-fiction author, probably best known for her 1980 literary journalism genre book The Burning Bed. She is also known for her authorship of wildlife pieces and books, including children's books.

Candlewick Press, established in 1991 and located in Somerville, Massachusetts, is part of the Walker Books group. The logo depicting a bear carrying a candle is based on Walker Books's original logo. The Walker Books Group has a unique ownership structure that includes employees and more than 150 authors and illustrators.

Jan Brett is an American illustrator and writer of children's picture books. She is known for colorful, detailed depictions of a wide variety of animals and human cultures ranging from Scandinavia to Africa. Her best-known titles include The Mitten, The Hat, and Gingerbread Baby. She has adapted or retold numerous traditional stories such as the Gingerbread Man and Goldilocks and has illustrated some classics such as "The Owl and the Pussycat".

Debi Gliori is a Scottish writer and illustrator of children's books.

Elizabeth 'Lucy' Cousins is an English author and illustrator of children's books. She is best known for her books featuring Maisy Mouse, but she has also published other children's books, such as Jazzy in the Jungle (2002) and one about Noah's Ark. She lives in Hampshire, England.

Ellen Wittlinger is an author for young adults, including Gracie's Girl and the Printz Honor book Hard Love.

The Happy Lion (ISBN 0-375-82759-5) is a 1954 children's picture book by Louise Fatio and illustrated by Roger Duvoisin. The tale follows a Happy Lion in France who, after escaping the small zoo where he lives, is surprised that people, who loved visiting him there, are now scared of him. 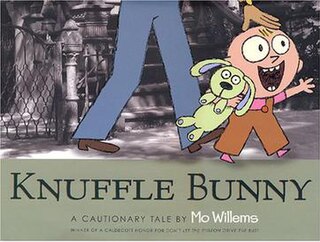 Knuffle Bunny: A Cautionary Tale (k-nuffle) is a children's picture book by Mo Willems. Released by Hyperion Books in 2004, Knuffle Bunny won the 2005 Caldecott Honor. The story spawned an animated short and a musical, as well as two sequels. Altogether, the Knuffle Bunny Series has sold more than 750,000 copies. The series' protagonist, Trixie, is named after Willems' real-life child.

The Booktrust Early Years Awards, originally the Sainsbury’s Baby Book Award(s), was a set of annual literary prizes for children's picture books. It was administered by Booktrust, an independent charity that promotes books and reading; from 1999 to 2004 it was sponsored by the supermarket chain Sainsbury's. The last Awards year was 2010.

Elisa Kleven is an American children's writer and illustrator of 30 books. She grew up in Los Angeles and currently resides near San Francisco. Her titles have been Booklist editor's choices, and PBS and Rainbow Book selections.

Penguin is a 2007 award-winning children's picture book by Polly Dunbar. It is about a boy who receives a penguin as a present and how they interact.

Polly Dunbar is an author-illustrator. Dunbar is known for her self-illustrated books Dog Blue, Flyaway Katie and Penguin. She is the daughter of children's book writer Joyce Dunbar, whom she worked with to publish the picture book Shoe Baby. She is also the illustrator for Here's a Little Poem by Jane Yolen and Andrew Fusek Peters, and My Dad's a Birdman by David Almond.

Emilie Boon is a Dutch-American children's author and illustrator. She was born in the Netherlands and has studied at the Royal Academy of Art at The Hague. Her books include Belinda's Balloon and the Peterkin series. The first in the series, Peterkin Meets a Star, has been made into an iPad and iPhone application. Boon has had books published by a number of publishers and in 8 languages. She has illustrated many books in collaboration with children's author, Harriet Ziefert, including the "Little Hippo" series. Boon has worked for Houghton Mifflin to illustrate online leveled readers that teach reading skills and improve content knowledge attainment. She teaches children's book illustration at the Rhode Island School of Design.

Wilfrid Swancourt Bronson was an American natural history artist and a "prolific writer and illustrator of children's books on various aspects of animal life".

Bad Kitty is a series of American children's books by Nick Bruel, about a housecat named Kitty, who often wreaks havoc about her owner's home. The first book, Bad Kitty, was a picture book, published in 2005, and featured Kitty encountering foods and doing activities categorized by the alphabet. It was followed by Poor Puppy, which deals with Kitty's housemate, Puppy. Bruel also created chapter books including Bad Kitty Gets a Bath, Happy Birthday, Bad Kitty, Bad Kitty vs. Uncle Murray: The Uproar at the Front Door, Bad Kitty Meets the Baby and Bad Kitty for President. The chapter books feature tips on caring for cats. In late 2011, Bruel published A Bad Kitty Christmas as a picture book. The series won a Wyoming Buckaroo Book Award. 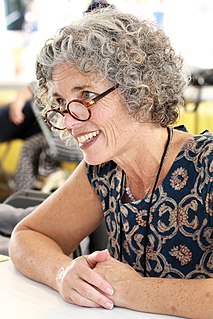 Elizabeth "Liz" Garton Scanlon is an American writer of children's books, primarily picture books in collaboration with other illustrators. 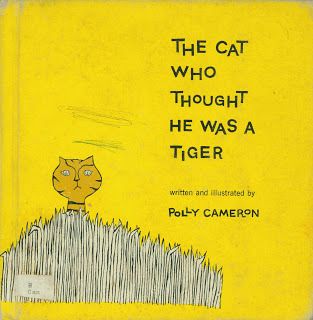 The Cat Who Thought He Was A Tiger is a 1956 picture book by Polly Cameron.

Mother Goose's Little Treasures is a 2007 children's picture book by Iona Opie. It is a collection of nursery rhymes, some little known, chosen by Opie from the Mother Goose oeuvre.

Inga Moore is an Anglo-Australian author and illustrator of books for children.