After playing for the club Pigeons in Duiven, Helfrich entered the youth academy of Landstede Basketbal.

Helfrich made his professional debut for Landstede Basketbal in the 2015–16 season. As an occasional member of the Landstede roster, he appeared in 14 games over three seasons. [1] After this, he played two seasons for Promotiedivisie club Dreamfield Dolphins. [2] [3]

Landstede Hammers is a Dutch basketball club based in Zwolle. The club plays in the BNXT League, the Dutch top tier division. The club was founded as Cees Lubbers The Hammers in 1995. In 1999, the club’s name was changed into Landstede Hammers. In 2001, the club received its current name Landstede Basketbal as the team became part of the same-named educational institution in Zwolle. The home games of the club are played in the Landstede Sportcentrum. 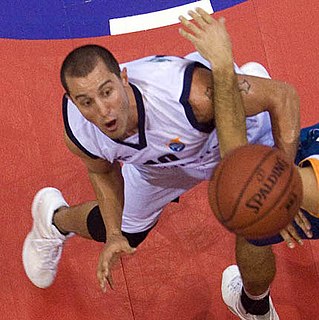 Matthew Otten is an American retired basketball player and current coach. He is the current head coach of Donar. Otten holds a Dutch passport as well and played the shooting guard position during his career. 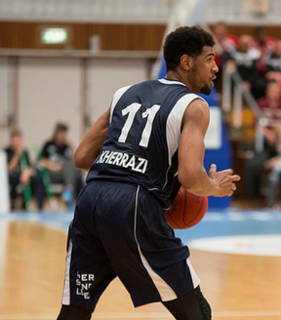 Mohamed Kherrazi is a Dutch professional basketball player of Moroccan descent who last played for Heroes Den Bosch of the BNXT League. He is also a member of the Dutch national basketball team. He is a record three-time DBL Defensive Player of the Year winner. 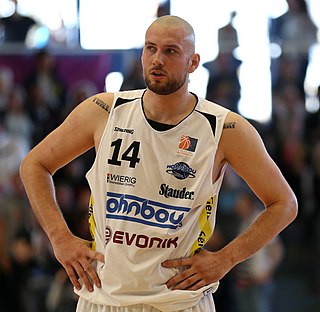 Nick Oudendag is a Dutch former basketball player. Standing at 6 ft 11 in (2.11 m), he played as center. During his career, Oudendag was a member of the Netherlands national team.

Heroes Den Bosch is a Dutch professional basketball club based in 's-Hertogenbosch. The club plays in the BNXT League since 2021 and in the top basketball division in the Netherlands since 1972. Founded as EBBC in 1951, the club had several sponsored names the following decades.

Mike Gerardus T. Schilder is a Dutch professional basketball player for Yoast United of the BNXT League. Formerly, he played for Den Bosch of the Dutch Basketball League (DBL). 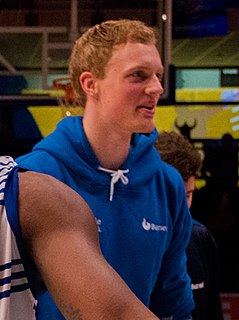 Shane Hammink is a Dutch former professional basketball player. He played college basketball in the United States for Louisiana State University (LSU) and Valparaiso University. Hammink went on to play in Spain, Belgium and the Netherlands. He won the Dutch national championship in 2022.

The 2018–19 Dutch Basketball League (DBL) was the 59th season of the Dutch Basketball League, the highest professional basketball league in the Netherlands. The regular season started on 6 October 2018 and ended 30 April 2019. The best eight teams qualify for the playoffs which start on 2 May 2019. Donar was the defending champion.

Yoast United is a Dutch basketball club based in Bemmel, Gelderland. Established in 2020, the team plays in the BNXT League, the highest level of basketball in the Netherlands. Home games are played at De Kooi, which has a capacity of 650 people.

Austin Luke is an American basketball player who last played for Donar in the BNXT League. He primarily plays as point guard.

The 2020–21 Yoast United season was the first season in the existence of the club. The club plays in the Dutch Basketball League (DBL) and DBL Cup. Led by head coach Matthew Otten, the team immediately reached the Final of the 2021 DBL Cup, in which the team lost to BAL Weert. In the playoffs, Yoast was eliminated in the quarterfinals by Heroes Den Bosch.

The 2020–21 DBL Cup was the 53rd edition of the Netherlands' national basketball cup tournament. This season the format was changed due to the compressed playing schedule caused by the ongoing COVID-19 pandemic. Only teams from the Dutch Basketball League participated this year and all games are to be played in one week.

Roel van Overbeek is a Dutch basketball player who plays for the Landstede Hammers in the BNXT League. Standing at 188 cm, he plays as point guard.

The 2021–22 Donar season was the 50th season in the existence of the club. The club played its first season in the BNXT League, a newly established league which combines the Belgian and Dutch national leagues.

Travis Young is an American former basketball player. Standing at 1.85 m, he was a point guard. During the 2000s, Young played in the Dutch Eredivisie for Landstede (2001–02), Omniworld Almere (2002–03), Donar and EiffelTowers Den Bosch. Young was also named to the league's All-Star Team five times.