Heroes Den Bosch is a Dutch professional basketball club based in 's-Hertogenbosch. [1] The club plays in the BNXT League since 2021 and in the top basketball division in the Netherlands since 1972. Founded as EBBC in 1951, the club had several sponsored names the following decades.

Den Bosch has won a record seventeen Dutch championships, seven Dutch Cup and two Dutch Supercup titles. The team has also been a regular at European competitions, most recently the FIBA Europe Cup. Heroes plays their home games at the Maaspoort, which has a capacity of approximately 2,700 people. [2]

On 18 October 1952, Eerste Bossche Basketball Club (EBBC) was founded by Cees Vossen, Tom van der Leur, Hans van Oorschot and Frans van de Wiel. In 1962, Den Bosch played in the top division Eredivisie for the first time, but not very successful. Subsequently the team was relegated again. In 1979, EBBC won its first title. In 1980, the team became Nashua Den Bosch after its new main sponsor. Its increased budget led to six consecutive Dutch titles between 1982 and 1987.

In December 1979, Nashua signed as the club's new main sponsor. [3] In the next 10 years, Nashua won 9 national championships and was close to the European top clubs. Star players such as Tom Barker, Dan Cramer, Mitchell Plaat, David Lawrence, Henk Pieterse, Paul Thompson and Mike Reddick played for Nashua in this decade.

Den Bosch changed its home arena to the newly built Maaspoort, increasing its home capacity from 1,200 to 3,500. Nashua played in the 1979 FIBA Intercontinental Cup.

Decades later, in June 2005, Den Bosch merged with EiffelTowers Nijmegen to form EiffelTowers Den Bosch. Following the merger the club had one of the largest budgets in the Netherlands, and with that they were able to attract high-quality players. In their first season they had immediate success by winning the Dutch League title. The year after that (2006–07) EiffelTowers The Bosch would win the title again after a clean sweep against the Matrixx Magixx, after losing only four games in the regular season. The two following years, Den Bosch reached the finals, but lost twice to Amsterdam.

In 2012, EiffelTowers won its fifteenth Dutch championship, after beating ZZ Leiden 1–4 in a best-of-seven-series.

After 13 years playing as the EiffelTowers, in 2013, the club changed its name to SPM Shoeters as a reference to its new main sponsor SPM Shoes and Boots, a shoe producer based in Waalwijk. [4] Along with the name change the club changed the team colors to black, after playing in red since 2000.

In the 2014–15 season, Shoeters won its sixteenth DBL championship after Donar was beaten 4–1 in the Finals. The team also performed excellently in the EuroChallenge that season, reaching the Top 16. Star of the season for Den Bosch was Brandyn Curry, who was named DBL Playoffs MVP.

After the 2015–16 season, it was revealed that Shoeters was dealing with serious financial problems which had the team on the edge of bankruptcy. [5]

In October 2016, the team was bought by Triple Double BV, a sports marketing enterprise. Owner of the company Bob van Oosterhout took over the club which was no longer in danger of dissolution. On 6 November 2016, Den Bosch found a new main sponsor and subsequently was named New Heroes Basketball after signing a three-year deal with the local online training platform New Heroes. [6] In its first season as New Heroes, the club finished fourth in the DBL and was swept by Donar in the semi-finals.

In the 2017–18 season, Croatian coach Silvano Poropat signed a two-year contract. [7] Under Poropat, Heroes finished fourth once again but was eliminated in the quarterfinals by Rotterdam Basketbal. Following the disappointing season, Poropat and Heroes parted ways.

For the 2018–19 season, Ivica Skelin was appointed as head coach. This season, New Heroes played in the FIBA Europe Cup after a European absence of 3 years. In Group D, Heroes had a 3–3 record and finished in third place. In the DBL playoffs, Den Bosch was once again eliminated in the semifinals, this time by Landstede.

On 21 August 2019, the club announced it was changing its name to Heroes Den Bosch and it is not planning to change the club name anymore. [10] In June, Heroes signed Jean-Marc Jaumin as its new head coach. [11]

On 15 June 2021, Heroes signed three-time DBL champion Erik Braal as head coach. [12] In the 2021–22 season, the DBL merged with the PBL into the BNXT League, in which the national leagues of Belgium and the Netherlands are combined. On 29 May 2022, Heroes ended a 7-year drought when it won its seventeenth national championship, beating ZZ Leiden in the finals series 3–2.

Due to sponsorship reasons, Heroes Den Bosch has known a lot of names over the years:

After many successful seasons by Nashua Den Bosch in the 1980s, a true basketball hall was built with the Maaspoort. The arena was opened on 3 September 1982 with a game against the NBA All-Stars. [14]

Donar, also known as Donar Groningen, is a professional basketball club based in Groningen, Netherlands. The club competes in the BNXT League and its home arena is MartiniPlaza, which has a seating capacity of 4,350 people.

Landstede Hammers is a Dutch basketball club based in Zwolle. The club plays in the BNXT League, the Dutch top tier division. The club was founded as Cees Lubbers The Hammers in 1995. In 1999, the club’s name was changed into Landstede Hammers. In 2001, the club received its current name Landstede Basketbal as the team became part of the same-named educational institution in Zwolle. The home games of the club are played in the Landstede Sportcentrum.

Matrixx Magixx was a professional basketball team based in Nijmegen and later Wijchen. The club played in the Dutch Basketball League (DBL), the Dutch top-tier league. Home games of the Magixx were played in Sporthal De Arcus since 2012, therefore De Horstacker was used. The long time main sponsor of the team was The Matrixx. In 2014, Magixx departed from the DBL after the club could not find funding.

Arvin Slagter is a Dutch basketball player who plays for the Netherlands men's national 3x3 team. 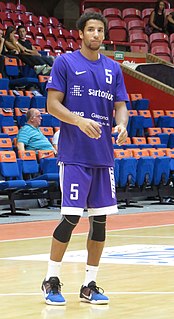 Stefan Wessels is a Dutch retired basketball player. He is the current General Manager of Heroes Den Bosch. In his playing career, Wessels has played for ABC Amsterdam and Heroes Den Bosch. Wessels also presented the Dutch national basketball team on various tournaments.

David Gonzalvez is an American professional basketball player for Tampereen Pyrintö in the Finnish Korisliiga. Standing at 1.93 m, Gonzalvez usually plays at the shooting guard position.

The 2012–13 NBB Cup was the 45th season of the Dutch NBB Cup. The championship game was played on March 24, 2013 in the Topsportcentrum (Almere). EiffelTowers Den Bosch won the game 73–61 over Landstede Basketbal and the club won its sixth NBB Cup title.

Raoul Korner is an Austrian professional basketball coach. He is the current head coach of Hamburg Towers of the German Basketball Bundesliga (BBL).

The 2014 DBL Playoffs was the postseason tournament of the Dutch Basketball League's (DBL) 2013–14 season. The tournament concluded with GasTerra Flames playing SPM Shoeters Den Bosch in the Final. The Playoffs started on 24 April and ended 1 June 2014.

Maarten Bouwknecht is a professional basketball player who plays for ZZ Leiden. Born in Groningen, he started his career with Donar in 2013. Standing at 1.85 m, he usually plays as point guard or shooting guard.

Erik Braal is a Dutch professional basketball coach, currently serving as head coach for Heroes Den Bosch. He was the head coach of Donar from 2015 until 2020. Braal was the most successful coach ever for the club with seven trophies won.

Mike Gerardus T. Schilder is a Dutch professional basketball player for Yoast United of the BNXT League. Formerly, he played for Den Bosch of the Dutch Basketball League (DBL).

The 2018–19 Dutch Basketball League (DBL) was the 59th season of the Dutch Basketball League, the highest professional basketball league in the Netherlands. The regular season started on 6 October 2018 and ended 30 April 2019. The best eight teams qualify for the playoffs which start on 2 May 2019. Donar was the defending champion.