Topsportcentrum Rotterdam is an indoor arena located in Rotterdam next to the Feijenoord Stadion. The arena opened in 2000 and has a capacity of 2,500 seats. [3] It holds many sports events in various sports and levels, such as international World and European Championships and Dutch National Championships.

The complex exists as two sporting halls. The first is located on the first floor and is 48x28 metres, while the pitch is 40x20 metres. On the second floor another sports hall of 44x24 metres is located. The pitch in this hall is 40x20 metres also, but the underground is rebound ace hardcourt.

As well as the sporting facilities, various hotel, restaurant and cafe facilities are available.

Currently there are three national sports teams that play their games inside the Topsportcentrum: the volleyball team Ortec Rotterdam Nesselande and the basketball teams Feyenoord Basketball.

This is a list of events held in the Topsportcentrum Rotterdam. 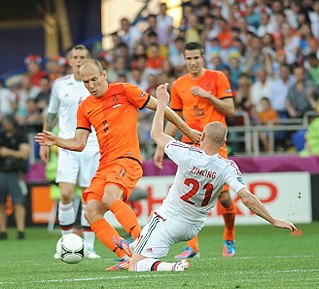 Approximately 4.5 million of the 16 million people in the Netherlands are registered to one of the 35,000 sports clubs in the country. About two thirds of the population older than 15 years participates in sports weekly. 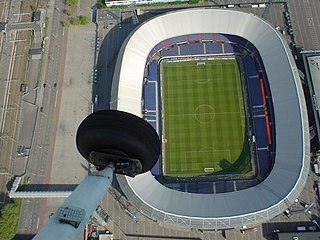 Stadion Feijenoord, more commonly known by its nickname De Kuip, is a stadium in Rotterdam, Netherlands. It was completed in 1937. The name is derived from the Feijenoord district in Rotterdam, and from the club with the same name. Gymnasticos Syllogos Iraklis, commonly referred to as Iraklis, is a Greek multi-sports club based in Thessaloniki. The club was founded in 1908 as "Macedonikos Gymnasticos Syllogos" and is one of the oldest and most historic sports-clubs in Greece. It is named after Heracles, the mythical Greek demigod. Their colours are blue or cyan and white, inspired by the Greek flag.

The Netherlands women's national cricket team, nicknamed the Lionesses, represents the Netherlands in international women's cricket. The team is organised by the Koninklijke Nederlandse Cricket Bond (KNCB), which has been an associate member of the International Cricket Council (ICC) since 1966.

SD Željezničar is the second largest association of sport clubs with the same name in Bosnia and Herzegovina. The largest one is USD Bosna. It was founded in 1921 by a group of railway workers as RŠD Željezničar, but after the World War II initial acronym was changed to SD.

Nico Petrus Johannes Freriks is a volleyball player from the Netherlands, who represented his native country at the 2004 Summer Olympics in Athens, Greece. There he ended up in ninth place with the Dutch Men's National Team. Freriks was named Best Setter at the 2004 Men's Volleyball Olympic Qualifier in Madrid, Spain.

Kometal Gjorče Petrov Skopje was a female handball club based in Skopje, the capital of Macedonia.

The 2010 European Korfball Championship was held in the Netherlands from October 22 to 31, with 16 national teams in competition.

Üsküdar Belediyespor is a multi-sports club established 1984 in Istanbul, Turkey by the municipality of Üsküdar district.

Polyvalent Hall of Bucharest is a multi-purpose indoor arena on the Tineretului Park in Bucharest, Romania. It is home to the CSM București of the National Handball League (LNHF). With a seating capacity of 5,300, the Sala Polivalentă also regularly hosts concerts, conventions and shows.

Volleybalclub Nesselande is a Dutch professional volleyball club in Zevenhuizen. The club has been known by various names and continues to be known by the abbreviation ZVH for 'Zevenhuisen'.