Kelly DeVries (born December 23, 1956) is an American historian specializing in the warfare of the Middle Ages. He is often featured as an expert commentator on television documentaries. He is professor of history at Loyola University Maryland and Honorary Historical Consultant at the Royal Armouries, UK.

He received his PhD in Medieval studies in 1987 from the University of Toronto, Centre for Medieval Studies. [1]

DeVries with co-editor Michael Livingston was named as one of the recipients of the 2017 Distinguished Book Award from the Society for Military History for their book The Battle of Crécy: A Casebook. [2]

Combined Arms is an approach to warfare which seeks to integrate different combat arms of a military to achieve mutually complementary effects. According to strategist William S. Lind, combined arms can be distinguished from the concept of "supporting arms" as follows: 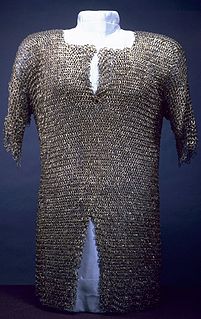 A hauberk or byrnie is a shirt of mail. The term is usually used to describe a shirt reaching at least to mid-thigh and including sleeves. Haubergeon generally refers to the quilted undergarment used with a hauberk, but the terms are sometimes used interchangeably.

A visor was an armored covering for the face often used in conjunction with Late Medieval war helmets such as the bascinet or sallet. The visor usually consisted of a hinged piece of steel that contained openings for breathing and vision. Appropriately, breaths refers to the holes in the metal of the visor. Visors protected the face during battle and could be remarkably durable. One surviving artifact was found to be "equivalent in hardness to cold worked high speed steel."

The Battle of Gavere was fought at Semmerzake, near Gavere, in the County of Flanders on 23 July 1453, between the army of Philip the Good of Burgundy and the rebelling city of Ghent. The battle ended the Revolt of Ghent with a Burgundian victory. 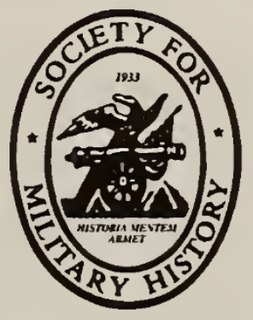 The Society for Military History is a United States–based international organization of scholars who research, write, and teach military history of all time periods and places. It includes naval history, air power history, and studies of technology, ideas, and homefronts. It publishes the quarterly refereed The Journal of Military History.

A battle or battaile was a division of a medieval army. The word may be rendered as "battalion", but Abels and Bachrach et al. say this is not accurate because the bataille was a completely ad hoc formation. In late medieval warfare, field armies were often drawn up into three main battles, also called guards: the vanguard (avant-garde), the middle guard, and the rearguard (arrière-garde), often abbreviated to simply the van, middle, and rear. These terms imply, correctly, that the van preceded the middle, which in turn preceded the rear, into battle if the battles were arranged sequentially as a column. If arranged abreast, the van was on the right and the rear the left.

Jim Bradbury is a British historian specialising in the military history of the Middle Ages.

Orban, also known as Urban, was an iron founder and engineer from Brassó, Transylvania, in the Kingdom of Hungary, who cast large-calibre artillery for the Ottoman siege of Constantinople in 1453.

Jean Desnouelles was a 19th-century French abbot and chronicler. He was the Abbot of St. Vincent, Laon and author of numerous works. Desnouelles's Chronicon documented Norman and medieval France and he appears to have been an expert on France in the medieval period.

Michael Livingston is a historian, a professor of medieval literature, and a historical fantasy novelist. His 2015 debut novel, The Shards of Heaven, was followed by two sequels.

Gravi de pugna is a forged letter written in the name of Augustine of Hippo which asserts that the morally superior side is always superior in battle and therefore that wars are proven to be just wars by their military success. The letter was widely accepted as authentic, and reassured soldiers that God was on their side.