Keven Lacombe (born July 12, 1985 in Amos, Quebec) is a Canadian professional racing cyclist. He was also an ice hockey player for Drummondville Voltigeurs of the Quebec Major Junior Hockey League.

The Laurentides-Lanaudière Junior AA Hockey League is a Canadian junior ice hockey league in the Laurentides and Lanaudière Regions of Quebec. The league is sanctioned by Hockey Quebec and Hockey Canada and its champions competes annually for the Coupe Dodge.

Normand Lacombe is a Canadian retired professional ice hockey right wing. He was drafted in the first round, 10th overall, by the Buffalo Sabres in the 1983 NHL Entry Draft. 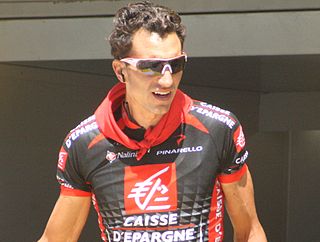 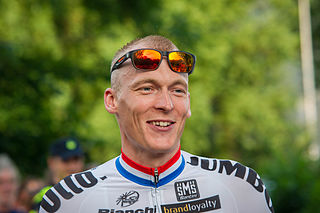 Robert Gesink is a Dutch professional cyclist, who currently rides for UCI WorldTeam Team Jumbo–Visma. His major victories include the 2012 Tour of California, the 2011 Tour of Oman and the 2010 Grand Prix Cycliste de Montréal. Gesink also won the Giro dell'Emilia twice and offered some good performances on Grand Tours and one-week stage races, thanks in part to his climbing and time trialing abilities.

Arnold Alcolea Nuñez is a Cuban racing cyclist who competed at the 2012 Summer Olympics.

François Parisien is a former professional cyclist born in Repentigny, Quebec, Canada. He competed as a professional between 2006 and 2013. 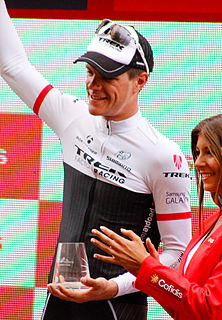 The Ligue de Hockey Junior AA Lac St-Louis is a Junior "AA" ice hockey league in the province of Quebec, Canada. The league is sanctioned by Hockey Quebec and Hockey Canada. But since 2018-2019 season the ligue does not exist anymore.