The Vuelta a Cuba (English: Tour of Cuba) was a multi-day road bicycle racing stage race held annually each February in Cuba. It was held from 1964 to 2010. [1] When the UCI Continental Circuits were created in 2005, the Vuelta a Cuba was added to the UCI America Tour schedule.

In road bicycle racing, a Grand Tour is one of the three major European professional cycling stage races: Giro d'Italia, Tour de France and Vuelta a España. Collectively they are termed the Grand Tours, and all three races are similar in format being three week races with daily stages. They have a special status in the UCI regulations: more points for the UCI World Tour are distributed in Grand Tours than in other races, and they are the only stage races allowed to last longer than 14 days.

The Vuelta a Andalucía or Ruta del Sol is a regional Spanish road bicycle race first held in 1925. Since 2005, it has been a 2.1 category race on the UCI Europe Tour. The race will become part of the new UCI ProSeries in 2020. The nickname, Ruta del Sol, is in reference to the region's popular tourist coastline the Costa del Sol.

Vuelta Ciclista a Burgos is an elite men's professional road bicycle racing event held annually in the Burgos province of Spain. Since 2005, Vuelta a Burgos has been a multi-day stage race as part of the UCI Europe Tour. In 2019, a multi-day women's stage race was added that runs in mid-May. The men's race will become part of the new UCI ProSeries in 2020.

Yuliet Rodríguez Jiménez is a former Cuban racing cyclist. She established herself as one of the most consistent Latin American cyclists in a country that has produced great female racers since the sport was first introduced to Cuban women in the mid-1980s.

The Vuelta a Guatemala is a multi-day road bicycle racing stage race held annually and typically during late October and early November in several locations in Guatemala. The competition carries a UCI rating of 2.2 and is part of the UCI America Tour, which is one of six UCI Continental Circuits sponsored by the Union Cycliste Internationale, the sport's international governing body. The race is organized by the Federacion Nacional de Ciclismo de Guatemala.

The Vuelta Ciclista a Costa Rica is a bicycle racing stage race held annually since 1965 in Costa Rica. The men's Vuelta carries a UCI rating of 2.2 and is part of the UCI America Tour, which is one of six UCI Continental Circuits sponsored by the Union Cycliste Internationale, the sport's international governing body. For the women's race see; Vuelta Internacional Femenina a Costa Rica.

The Vuelta a Venezuela is a men's multi-day road bicycle racing stage race held annually in Venezuela. The Vuelta a Venezuela carries a UCI rating of 2.2 and is part of the UCI America Tour, which is one of six UCI Continental Circuits sponsored by the Union Cycliste Internationale, the sport's international governing body. The event is organized by the Federacion Venezolana de Ciclismo.

Vuelta Ciclista Mexico Telmex is an annual road cycling race in Mexico that takes place over the course of eight days, involving eight stages. The Mexico national tour has a rich history dating back to the 1940s, and this latest incarnation was revived in late 2008 and early 2009 as the condensed evolution of the Vueltas de las Americas, 21-day stage race, defunct from 2003. This national tour is currently ranked 2.2, according to UCI race classifications, and is a part of the UCI America Tour. Title sponsorship is provided via CONADE, as well as the Telmex Foundation, a philanthropic entity created by Telmex C.E.O., Carlos Slim. Additional sponsorship has been provided previously by BMW, Mercury, Coca-Cola, NovoSportware, and Metalurgica Creativa.

Miguel Armando Ubeto Aponte is a male professional road racing cyclist from Venezuela. He turned professional in 2012 with Androni Giocattoli–Venezuela before signing with the UCI World Tour team Lampre–Merida for 2013. In 2011 he won the UCI America Tour.

The 2010 Vuelta a España was held from 28 August to 19 September and was won by Vincenzo Nibali. The race began in Seville and ended, as is tradition, in Madrid. 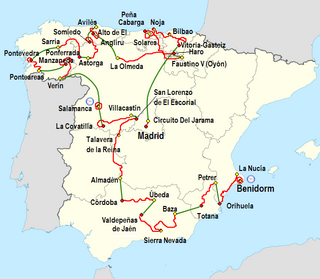 The 2011 Vuelta a España was held from 20 August to 11 September. The bicycle race began in Benidorm with a team time trial and ended, as is traditional, in Madrid. The 2011 Vuelta was the 66th edition of the race and was the first Vuelta in 33 years that visited the Basque Country. The 33-year absence from the region was due to fear of political protests.

Burgos BH is a UCI Professional Continental cycling team based in Spain. The team was founded in 2006 under the name of "Viña Magna-Cropu". 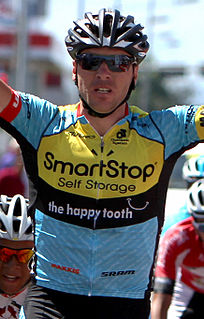 Jure Kocjan is a Slovenian former professional road racing cyclist, who rode professionally between 2005 and 2016. 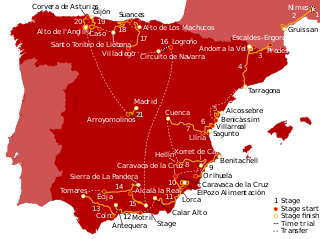 The 2017 Vuelta a España was a three-week Grand Tour cycling stage race that took place in Spain between 19 August and 10 September 2017. The race was the 72nd edition of the Vuelta a España and the final Grand Tour of the 2017 cycling season. The race started in Nîmes, France, and finished in Madrid. It was the first time the race has started in France and only the third time it has started outside Spain, after 1997 (Portugal) and 2009 (Netherlands).

The 2020 UCI World Tour is a series of races that was scheduled to include thirty-six road cycling events throughout the 2020 cycling season, although some of these are at least postponed due to the COVID-19 pandemic in Europe. The tour started with the opening stage of the Tour Down Under on 21 January, and is scheduled to conclude with the final stage of the Tour of Guangxi on 10 November.

The 2020 UCI America Tour is the sixteenth season of the UCI America Tour. The season began on October 23, 2019 with the Vuelta a Guatemala and will end in September 2020.