Kim Hilding Bergstrand (born 18 April 1968) is a Swedish football coach. A former player for Stockholm rivals AIK and Hammarby IF, he is the coach of the Allsvenskan team Djurgårdens IF.

Statement on German leadership during the 1930s and 1940s

On January 31st 2021, Kim Bergstrand participated in an interview about leadership in Swedish newspaper Aftonbladet, where he referred to German leadership during the 1930s and 1940s as something you "can learn from". In the TV clip, Bergstrand states that he has learned that:

- “Leadership is something you deserve and work towards. You are not born a leader, it is not something you get for free but it is hard work all the time. To reflect but also read what other wise people have done, or good leaders and people who have led people. You can say what you want about some horrible people who lived in Germany in the 30s and 40s, but they managed to get people to do things in a context. Methods and such can be discussed, but there are certainly things that they also did that you can learn from. Or how not to do. But I think you can look for leadership everywhere."

The statement received strong criticism, including from the Swedish Committee against Anti-Semitism.

Allmänna Idrottsklubben Ishockeyförening, is the ice hockey department of sports club Allmänna Idrottsklubben based in Stockholm, Sweden. Since 2014, AIK's men's team compete in HockeyAllsvenskan, the second tier of ice hockey in Sweden, following a four-year spell in the top flight, the SHL. The women's team competes in Riksserien, the highest division of women's ice hockey. AIK's home games are mainly played at Hovet, which seats 8,050 spectators, though some high-profile games may be played at the Ericsson Globe which has a larger capacity of 13,850. 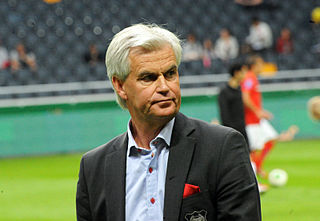 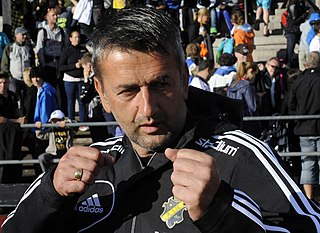 Nebojša Novaković is a Bosnian-Herzegovinian-born Swedish former football player of Serbian ethnicity who played as a striker, most notably for AIK. He is the manager of Vasalunds IF.

Bertil Bäckvall was a Swedish footballer and manager. He mostly represented Hammarby IF and AIK, and won two caps for the Sweden national team.

Tvillingderbyt is a football fixture in Stockholm, Sweden, between cross-town rivals AIK and Djurgårdens IF. Both clubs were founded in Stockholm in 1891, just three weeks apart, but they started playing football in 1896 and 1899 respectively.

Antônio Flávio Aires dos Santos is a Brazilian footballer who plays as a striker for Ponte Preta. Antônio Flávio is more commonly known as Flávio by the fans and commentators. 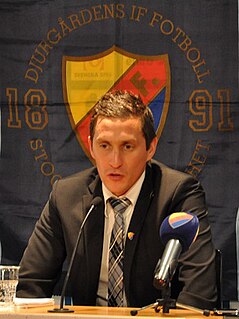 Carlos Banda is a Chilean-Swedish football manager. He is the manager of Assyriska FF.

Panajotis "Panos" Dimitriadis is a Swedish professional footballer who plays for AIK. Known for being able to play in several positions, at AIK he is mainly considered a central defender, but is also an option as a defensive midfielder, offensive midfielder or wing-back.

The Swedish football club AIK was founded in 1891 and won the Swedish Football Championship in 1900 and 1901. In the following years the team competed instead in a Stockholm-only competition, and then in the Svenska Serien. In 1924 AIK joined the Allsvenskan league, and won it in 1932 and 1937. In 1937 also the club relocated to the Råsunda Stadium.