Lawrence Davidson is a retired professor of history from West Chester University in West Chester, Pennsylvania. [1] [ non-primary source needed ] He is the author of Islamic Fundamentalism, Cultural Genocide and has focused his academic research on American foreign relations with the Middle East.

Davidson was born to a secular Jewish household in Philadelphia, Pennsylvania in 1945. He attended Rutgers University from 1963–1967, where he earned a bachelor's degree in history. While attending Rutgers, Davidson developed a leftist perspective regarding the problems facing the US in the 1960s.[ citation needed ]

In 1967, Davidson was accepted into Georgetown University Master's program where he studied modern European intellectual history under Palestinian expatriate professor Hisham Sharabi.[ citation needed ] During his time at Georgetown (1969–1970), Davidson became one of the founding members of the Students for a Democratic Society (SDS) at Georgetown at the height of the Vietnam War. [2] [ non-primary source needed ][ unreliable source? ]

In 1970, with the breakup of the SDS, Davidson left the United States for Canada. [3] He spent the next six years at the University of Alberta in Edmonton where he earned a PhD (1976) in modern European Intellectual history. [4] [5]

After returning to the United States in the mid 1970s, Davidson spent several years as an adjunct instructor at various colleges and universities, as well as working for a time as a middle manager at Alexian Brothers Health Systems Catholic hospital in St. Louis. [ citation needed ] Subsequently, he was contracted to write the history of Alexian Brothers’ oldest hospital. This led to his first book, The Alexian Brothers of Chicago (1990). [6] [ non-primary source needed ]

In 1989, Davidson joined the faculty of history at West Chester University as a tenure track professor where he taught Middle East history, the history of science, and modern European intellectual history. [7] [ unreliable source? ] He retired from WCU in May 2013. [8]

Currently, Davidson writes for his Blog " To The Point Analyses" and is a contributing editor for Logos: A Journal of Modern Society and Culture. [9] Davidson is a board member of the U.S. Campaign for the Academic and Cultural Boycott of Israel, alongside Hamid Dabashi, Ilan Pappé, Michel Shehadeh, and honorary advisory board member Desmond Tutu. [10]

In 2012, Rutgers University Press published Davidson's book Cultural Genocide. Davidson defines cultural genocide as the "purposeful destructive targeting of out-group cultures so as to destroy or weaken them in the process of conquest or domination". [11] [ non-primary source needed ]

Fundamentalism usually has a religious connotation that indicates unwavering attachment to a set of irreducible beliefs. However, fundamentalism has come to be applied to a tendency among certain groups – mainly, although not exclusively, in religion – that is characterized by a markedly strict literalism as it is applied to certain specific scriptures, dogmas, or ideologies, and a strong sense of the importance of maintaining ingroup and outgroup distinctions, leading to an emphasis on purity and the desire to return to a previous ideal from which advocates believe members have strayed. Rejection of diversity of opinion as applied to these established "fundamentals" and their accepted interpretation within the group often results from this tendency.

Israel Shahak was an Israeli professor of organic chemistry at the Hebrew University of Jerusalem, a Holocaust survivor, an intellectual of liberal political bent, and a civil-rights advocate and activist on behalf of both Jews and Gentiles (non-Jews). For twenty years, he headed the Israeli League for Human and Civil Rights (1970–90) and was a public critic of the policies of the governments of Israel. As a public intellectual, Shahak's works about Judaism proved controversial, especially the book Jewish History, Jewish Religion: The Weight of Three Thousand Years (1994).

Bernard Lewis, was a British American historian specialized in Oriental studies. He was also known as a public intellectual and political commentator. Lewis was the Cleveland E. Dodge Professor Emeritus of Near Eastern Studies at Princeton University. Lewis' expertise was in the history of Islam and the interaction between Islam and the West. 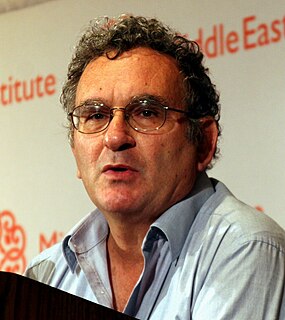 Benny Morris is an Israeli historian. He was a professor of history in the Middle East Studies department of Ben-Gurion University of the Negev in the city of Beersheba, Israel. He is a member of the group of Israeli historians known as the "New Historians," a term Morris coined to describe himself and historians Avi Shlaim and Ilan Pappé.

Norman Frank Cantor was a Canadian-American historian who specialized in the medieval period. Known for his accessible writing and engaging narrative style, Cantor's books were among the most widely read treatments of medieval history in English. He estimated that his textbook The Civilization of the Middle Ages, first published in 1963, had a million copies in circulation.

Abdolkarim Soroush (عبدالكريم سروش Persian pronunciation: [æbdolkæriːm soruːʃ]; born Hossein Haj Faraj Dabbagh, is an Iranian Islamic thinker, reformer, Rumi scholar, public intellectual, and a former professor of philosophy at the University of Tehran and Imam Khomeini International University. He is arguably the most influential figure in the religious intellectual movement of Iran. Soroush is currently a visiting scholar at the University of Maryland in College Park, MD. He was also affiliated with other prestigious institutions, including Harvard, Princeton, Yale, Columbia, the Leiden-based International Institute as a visiting professor for the Study of Islam in the Modern World and the Wissenschaftskolleg in Berlin. He was named by TIME as one of the world’s 100 most influential people in 2005, and by Prospect magazine as one of the most influential intellectuals in the world in 2008. Soroush's ideas, founded on Relativism, prompted both supporters and critics to compare his role in reforming Islam to that of Martin Luther in reforming Christianity.

Efraim Karsh is an Israeli–British historian, the founding director and emeritus professor of Middle East and Mediterranean Studies at King's College London. Since 2013, he serves as professor of Political Studies at Bar-Ilan University. He is also a principal research fellow and former director of the Middle East Forum, a Philadelphia-based think tank. He is a vocal critic of the New Historians, a group of Israeli scholars who have questioned the traditional Israeli narrative of the Arab–Israeli conflict.

Middle Eastern studies is a name given to a number of academic programs associated with the study of the history, culture, politics, economies, and geography of the Middle East, an area that is generally interpreted to cover a range of nations including Lebanon, Palestine, Jordan, Egypt, Iraq, Iran, Turkey, Syria, Saudi Arabia, Yemen, Oman and Israel. It is considered a form of area studies, taking an overtly interdisciplinary approach to the study of a region. In this sense Middle Eastern studies is a far broader and less traditional field than classical Islamic studies. 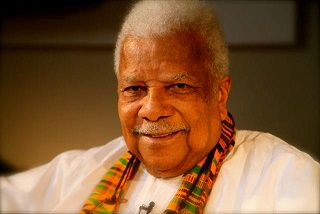 Ali Al'amin Mazrui, was a Kenyan-born American academic, professor, and political writer on African and Islamic studies and North-South relations. He was born in Mombasa, Kenya. His positions included Director of the Institute of Global Cultural Studies at Binghamton University in Binghamton, New York, and Director of the Center for Afro-American and African Studies at the University of Michigan. He produced the television documentary series The Africans: A Triple Heritage.

Norman Arthur Stillman, also Noam, b. 1945, is emeritus Schusterman-Josey Professor and emeritus Chair of Judaic History at the University of Oklahoma. He specializes in the intersection of Jewish and Islamic culture and history, and in Oriental and Sephardi Jewry, with special interest in the Jewish communities in North Africa. His major publications are The Jews of Arab Lands: a History And Source Book and Sephardi Religious Responses to Modernity. In the last few years, Stillman has been the executive editor of the "Encyclopedia of Jews in the Islamic World", a project that includes over 2000 entries in 5 volumes.

The history of Islamic Principlism in Iran covers the history of Islamic revivalism and the rise of political Islam in modern Iran. Today, there are basically three types of Islam in Iran: traditionalism, modernism, and a variety of forms of revivalism usually brought together as fundamentalism. Neo-fundamentalists in Iran are a subgroup of fundamentalists who have also borrowed from Western countercurrents of populism, fascism, anarchism, Jacobism and Marxism.

Norton Mezvinsky is an American historian, professor, and author. He is a Distinguished University Professor, Emeritus, Central Connecticut State University, and is the president of the International Council for Middle East Studies, an academic think tank in Washington, D. C. He has written numerous published books, articles, and book reviews that deal with various aspects of the Arab-Israeli conflict and Zionism.

Yair Auron is an Israeli historian, scholar and expert specializing in Holocaust and genocide studies, racism and contemporary Jewry. Since 2005, he has served as the head of the Department of Sociology, Political Science and Communication of The Open University of Israel and an associate professor.

Edward Wadie Said was a professor of literature at Columbia University, a public intellectual, and a founder of the academic field of postcolonial studies. A Palestinian American born in Mandatory Palestine, he was a citizen of the United States by way of his father, a U.S. Army veteran.

Heath Ward Lowry was the Atatürk Professor of Ottoman and Modern Turkish Studies at Princeton University and Boğaziçi University. He is an author of books about the history of the Ottoman Empire and Modern Turkey.

Richard T. "Dick" Antoun was an professor of anthropology at Binghamton University who specialized in Islamic and Middle Eastern studies.

Keith David Watenpaugh is an American academic. He is Professor of Human Rights Studies at the University of California, Davis. A leading American historian of the contemporary Middle East, human rights, and modern humanitarianism, he is an expert on the Armenian Genocide and its denial, and the role of the refugee in world history.

Normative Judaism's views on warfare are defined by restraint that’s neither guided by avidness for belligerence nor is it categorically pacifist. Traditionally, self-defense has been the underpinning principle for the sanctioned use of violence, with the maintenance of peace taking precedence over waging war. While the biblical narrative about the conquest of Canaan and the commands related to it have had a deep influence on Western culture, mainstream Jewish traditions throughout history have treated these texts as purely historical or highly conditioned, and in either case not relevant to contemporary life. However, some minor strains of radical Zionism promote aggressive war and justify them with biblical texts.

Hanna Musleh is a Palestinian film maker and university professor.