The Lincoln Park Grounds, commonly known as Union Grounds, was a former baseball park, part of Lincoln Park, located in Cincinnati, Ohio. The Grounds were built for the Union Cricket Club in 1856; they "were used for cricket and baseball in the summer and were flooded for skating in the winter." [1] In 1865 Harry Wright became the professional of the Cincinnati Cricket Club, which also used the grounds, and the next year Aaron Champion, president of the new Cincinnati Base Ball Club, "approached Wright to propose a limited use of the grounds if the CBBC and Live Oaks club would put in $2000 each to revamp the Lincoln Park Grounds." [2]

A year later the [Red Stockings] leased the grounds of the Union Cricket Club for its home tilts. Most club members referred to the field as the Union Grounds, although it also was known as the Union Cricket Club Grounds and the Lincoln Park Grounds, given the fact that the eight-acre, fenced grounds were located in a small park behind Lincoln Park in Cincinnati, near the Union Terminal. It was a twenty-minute ride by streetcar to the Union Grounds from the heart of downtown Cincinnati. Aaron Champion ordered that approximately $10,000 worth of improvements be made to the home grounds for the 1867 season, including grading and sodding of the field and building of a new clubhouse and stands. [3]

The ballpark hosted three National Association games in the spring and summer of 1871. One of them was held on July 4, featuring the Boston Red Stockings as the "visitors" and the Washington Olympics as the "home" team. Those were the two clubs that most of the 1869-70 Cincinnati Red Stockings players had joined when the Cincinnati club disbanded after the 1870 season. The previous day, those former members of the Red Stockings had played an exhibition game against the other members of the Boston and Olympic clubs, advertised as the "Old Reds" against a "picked nine". The "picked nine" won the game 15-13.(Cincinnati Enquirer, July 4, 1871, p. 4)

The Union Grounds were used until 1875; the next year a new Cincinnati Red Stockings club played at the Avenue Grounds two miles to the north. [4]

Lincoln Park itself was eventually closed and its property became the site of the Cincinnati Union Terminal.

South End Grounds refers to any one of three baseball parks on one site in Boston, Massachusetts. They were home to the franchise that eventually became known as the Boston Braves, first in the National Association and later in the National League, from 1871 to 1914.

The Cincinnati Red Stockings of 1869 were baseball's first openly all-professional team, with ten salaried players. The Cincinnati Base Ball Club formed in 1866 and fielded competitive teams in the National Association of Base Ball Players (NABBP) 1867–1870, a time of a transition that ambitious Cincinnati, Ohio businessmen and English-born ballplayer Harry Wright shaped as much as anyone. Major League Baseball recognized those events officially by sponsoring a centennial of professional baseball in 1969.

George Wright was an American shortstop in professional baseball. He played for the 1869 Cincinnati Red Stockings, the first fully professional team, when he was the game's best player. He then played for the Boston Red Stockings, helping the team win six league championships from 1871 to 1878. His older brother Harry Wright managed both Red Stockings teams and made George his cornerstone. George was elected to the Baseball Hall of Fame in 1937. After arriving in Boston, he also entered the sporting goods business. There he continued in the industry, assisting in the development of golf.

William Henry "Harry" Wright was an English-born American professional baseball player, manager, and developer. He assembled, managed, and played center field for baseball's first fully professional team, the 1869 Cincinnati Red Stockings. It was there where he is credited with introducing innovations such as backing up infield plays from the outfield and shifting defensive alignments based on hitters' tendencies. For his contributions as a manager and developer of the game, he was inducted into the Baseball Hall of Fame in 1952 by the Veterans Committee. Wright was also the first to make baseball into a business by paying his players up to seven times the pay of the average working man.

Avenue Grounds was a baseball field located in Cincinnati, USA. Also known as Brighton Park and Cincinnati Baseball Park, the ground was home to the Cincinnati Reds baseball club from April 25, 1876 to August 27, 1879. The ballpark featured a grandstand that could seat up to 3,000 fans. It was approximately 2 miles (3.2 km) north of the Union Grounds, where the original professional team from the area, the Cincinnati Red Stockings played, and was approximately 4 miles (6.4 km) from the heart of the city, so horse-drawn streetcars and trains were a popular way to travel to the park. The ballpark had first opened in 1875, and would continue to be used for various types of amateur sports until at least the mid-1890s. The major league club of 1876–1879 played poorly, and actually dropped out of the league before the 1879 season ended. The club revived for 1880, and relocated to the Bank Street Grounds.

The Bank Street Grounds is a former baseball park located in Cincinnati. The park was home to three major league baseball teams. The National League Cincinnati Stars club in 1880, the current Cincinnati Reds franchise from 1882 to 1883 and the Cincinnati Outlaw Reds of the Union Association in 1884. It succeeded the Avenue Grounds as the home site for professional ball in the Queen City.

Union Base-Ball Grounds was a baseball park located in Chicago. The park was "very visibly downtown", its small block bounded on the west by Michigan Avenue, on the north by Randolph Street, and on the east by railroad tracks and the lake shore, which was then much closer than it is today. The site is now part of Millennium Park. 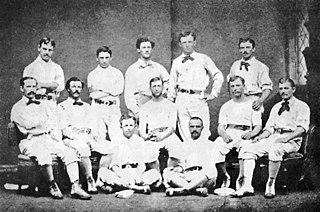 The Athletic Base Ball Club of Philadelphia was a prominent National Association, and later National League, professional baseball team that played in the second half of the 19th century.

The Capitoline Grounds, also known as Capitoline Skating Lake and Base Ball Ground, was a baseball park located in Brooklyn, New York from 1864 to 1880. It was built to rival nearby Union Grounds, also in Brooklyn. The park hosted local amateur teams in its early history, but later hosted professional and semi-professional games. The park's only season as the home field for an all-professional team occurred in 1872 when the Brooklyn Atlantics joined the National Association of Professional Base Ball Players. The park was flooded during the winter and used as an ice skating park. The grounds were used by local high schools and colleges as well, to play American football games, and ice rink football matches.

The following are the baseball events of the year 1870 throughout the world.

Dexter Park was a horse race track in Chicago built in the years following the Civil War. It was named for a gelding and trotter who had set world records for the mile and inspired the naming of several new towns including Dexter, Missouri and Dexter, Texas.

The Troy Haymakers were an American professional baseball team.

Frederick A. Waterman played third base for the original Cincinnati Red Stockings, the first fully professional baseball team. Throughout his career with "major" teams, amateur and pro, third base was his regular position in the field.

The Cream City Club of Milwaukee, Wisconsin was a baseball team in the 1860s, usually known as the Cream Citys. 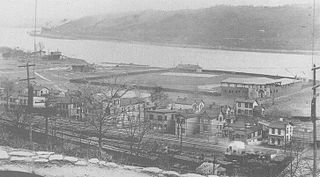 East End Park was a former major league baseball park located in the East End neighborhood of Cincinnati in the United States. The ballpark, which is also known to baseball historians as Pendleton Park, was home to the Cincinnati Reds of the American Association during the 1891 baseball season. The club was led by the flamboyant star, Mike "King" Kelly.

The Cincinnati Buckeyes was the name of two amateur baseball teams in Cincinnati, Ohio. The first, formed in 1859, disbanded during the Civil War.