This is a dynamic list and may never be able to satisfy particular standards for completeness. You can help by adding missing items with reliable sources.
Contents:

The Manifesto of Czech writers was the first public declaration in favour of the self-determination of the Czech nation during the First World War. It was published in May 1917. The declaration was directed at the Czech deputies at the Imperial Council in Vienna, the Parliament of the Austrian parts of the Austro-Hungarian Empire.

The Order of Tomáš Garrigue Masaryk is an Order of the Czech Republic and the former Czechoslovakia. It was established in 1990 after the Velvet Revolution, and re-established in 1994. The President of the Czech Republic awards it to individuals who have made outstanding contributions to the development of democracy, humanity and human rights. Unlike in the past, it is awarded to the Czech citizens and foreigners alike. The order has five classes, of which class I is the highest. The order is named in honor of Tomáš Garrigue Masaryk, an advocate of Czechoslovak independence and the first President of Czechoslovakia. 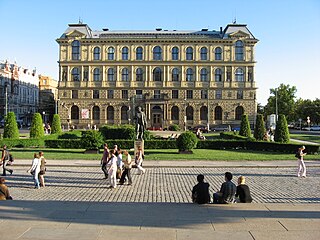 The Czech and Slovak pavilion houses the national representation of the Czech Republic and Slovakia during the Venice Biennale arts festivals.