This is a list of notable job scheduler software. Job scheduling applications are designed to carry out repetitive tasks as defined in a schedule based upon calendar and event conditions. This category of software is also called workload automation. Only products with their own article are listed:

Grid computing is the use of widely distributed computer resources to reach a common goal. A computing grid can be thought of as a distributed system with non-interactive workloads that involve many files. Grid computing is distinguished from conventional high-performance computing systems such as cluster computing in that grid computers have each node set to perform a different task/application. Grid computers also tend to be more heterogeneous and geographically dispersed than cluster computers. Although a single grid can be dedicated to a particular application, commonly a grid is used for a variety of purposes. Grids are often constructed with general-purpose grid middleware software libraries. Grid sizes can be quite large.

In computing, at is a command in Unix-like operating systems, Microsoft Windows, and ReactOS used to schedule commands to be executed once, at a particular time in the future.

The Globus Toolkit is an open-source toolkit for grid computing developed and provided by the Globus Alliance. On 25 May 2017 it was announced that the open source support for the project would be discontinued in January 2018, due to a lack of financial support for that work. The Globus service continues to be available to the research community under a freemium approach, designed to sustain the software, with most features freely available but some restricted to subscribers.

The software utility cron also known as cron job is a time-based job scheduler in Unix-like computer operating systems. Users who set up and maintain software environments use cron to schedule jobs to run periodically at fixed times, dates, or intervals. It typically automates system maintenance or administration—though its general-purpose nature makes it useful for things like downloading files from the Internet and downloading email at regular intervals. The origin of the name cron is from the Greek word for time, χρόνος (chronos).

HTCondor is an open-source high-throughput computing software framework for coarse-grained distributed parallelization of computationally intensive tasks. It can be used to manage workload on a dedicated cluster of computers, or to farm out work to idle desktop computers – so-called cycle scavenging. HTCondor runs on Linux, Unix, Mac OS X, FreeBSD, and Microsoft Windows operating systems. HTCondor can integrate both dedicated resources and non-dedicated desktop machines into one computing environment. 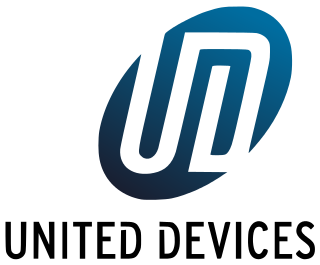 United Devices, Inc. was a privately held, commercial distributed computing company that focused on the use of grid computing to manage high-performance computing systems and enterprise cluster management. Its products and services allowed users to "allocate workloads to computers and devices throughout enterprises, aggregating computing power that would normally go unused." It operated under the name Univa UD for a time, after merging with Univa on September 17, 2007.

A job scheduler is a computer application for controlling unattended background program execution of jobs. This is commonly called batch scheduling, as execution of non-interactive jobs is often called batch processing, though traditional job and batch are distinguished and contrasted; see that page for details. Other synonyms include batch system, distributed resource management system (DRMS), distributed resource manager (DRM), and, commonly today, workload automation (WLA). The data structure of jobs to run is known as the job queue.

anacron is a computer program that performs periodic command scheduling, which is traditionally done by cron, but without assuming that the system is running continuously. Thus, it can be used to control the execution of daily, weekly, and monthly jobs on systems that don't run 24 hours a day. anacron was originally conceived and implemented by Christian Schwarz in Perl, for the Unix operating system. It was later rewritten in C by Itai Tzur; maintainers have included Sean 'Shaleh' Perry and Pascal Hakim. It is a dependency of cronie which is maintained by Red Hat, and Red Hat updates to cronie have included updates to anacron as well.

The Terascale Open-source Resource and QUEue Manager (TORQUE) is a distributed resource manager providing control over batch jobs and distributed compute nodes. TORQUE can integrate with the non-commercial Maui Cluster Scheduler or the commercial Moab Workload Manager to improve overall utilization, scheduling and administration on a cluster.

Distributed Resource Management Application API (DRMAA) is a high-level Open Grid Forum (OGF) API specification for the submission and control of jobs to a distributed resource management (DRM) system, such as a cluster or grid computing infrastructure. The scope of the API covers all the high level functionality required for applications to submit, control, and monitor jobs on execution resources in the DRM system.

Univa was a software company that developed workload management and cloud management products for compute-intensive applications in the data center and across public, private, and hybrid clouds, before being acquired by Altair Engineering in September 2020.

VisualCron is a job scheduler and automation tool for Windows.

The Slurm Workload Manager, formerly known as Simple Linux Utility for Resource Management (SLURM), or simply Slurm, is a free and open-source job scheduler for Linux and Unix-like kernels, used by many of the world's supercomputers and computer clusters.

webcron is the term for a time-based job scheduler hosted on a web server. The name derives its roots from the phrase web server and the Unix daemon cron. A webcron solution enables users to schedule jobs to run within the web server environment on a web host that does not offer a shell account or other means of scheduling jobs.

Flux is a software company that develops and licenses software products targeted for workflow, job scheduling, and managed file transfer. Headquartered in Boulder, Flux also has offices in Houston and Memphis.