Live Wire Radio is a radio variety show that was launched in 2004 in Portland, Oregon, United States.

Live Wire was initially hosted by Rob Sample, followed by Courtenay Hameister, with current hosting duties covered by Luke Burbank. [1] [2] Burbank has a podcast called Too Beautiful to Live and is an occasional guest-host on the nationally syndicated NPR quiz show Wait Wait... Don't Tell Me! . [3]

Live Wire is built on various elements such as standup comedy, guest interviews, and musical performances. [4] [5] Its emphasis is on the quirky local character of Portland. [4] Each show is recorded in front of a live audience, every other week, which is then edited into material for two weekly shows. [6]

In February 2003, [7] Kate Sokoloff approached Robyn Tenenbaum with the idea for Live Wire, a younger, "hipper" version of Prairie Home Companion, [8] in a format similar to West Coast Live . [8] Tenenbaum had worked on rock concerts with Bill Graham Presents, [9] and for four years had helped produce West Coast Live for NPR in San Francisco. Sokoloff was producing local theatre. The two women started a production company called Moxiefish, and put together a demo of Live Wire in September 2003, which they shopped to Oregon Public Broadcasting (OPB). About 150 people watched the first taping in March 2004 at the Hollywood Theatre, hosted by Rob Sample. The first broadcast was at 7 pm on Saturday, March 27, 2004, over the OPB network. [10]

Because of Sample's other commitments, head writer Courtenay Hameister replaced him as host after four shows. [5] [13] Hameister was working as an advertising copy writer, and she had helped to produce the sketch comedy show The State which aired on MTV in the early 1990s. [4] Live Wire consulted with Bill Oakley, known for his writing credits on the television shows The Simpsons and Portlandia . [4]

In September 2013, Luke Burbank became the show's official host, after filling in as guest host after Hameister stepped down in March of that year. With his podcast audience and appearances on Wait Wait... Don't Tell Me! , producers hoped Burbank would bring Live Wire a higher national profile. Hameister stayed with the show as head writer. [2]

Live Wire first aired on OPB in 2004. In early 2009 it was beginning to have a national audience. [5] The show uses Public Radio Exchange for delivery to markets outside of Oregon. [4] It airs on a delayed/recorded basis on six National Public Radio stations outside of Portland, including Spokane and Indianapolis, and seven volunteer-run community radio stations. [14] According to the Portland Monthly , by January 2014 it was carried by 40 US stations and one in England, with some 80,000 listeners each week. [6] It is also available as a podcast. [11] As of February 2014 the show's website listed only 14 stations on which it aired and explained that its airing in England was limited to the Royal Berkshire Hospital, an acute care facility. [14] In 2014, Live Wire was picked up by Public Radio International. [15]

Major underwriters for the show include the Fully (ergonomic chairs and desks), Alaska Airlines, and Whole Foods Market. [16]

Oregon Public Broadcasting (OPB) is the primary television and radio public broadcasting network for most of the U.S. state of Oregon as well as southern Washington. OPB consists of five full-power television stations, dozens of VHF or UHF translators, and over 20 radio stations and frequencies. Broadcasts include local and regional programming as well as television programs from the Public Broadcasting Service (PBS) and American Public Television (APT), and radio programs from National Public Radio (NPR), Public Radio International (PRI), American Public Media (APM), Public Radio Exchange (PRX), and the BBC World Service, among other distributors. Its headquarters and television studios are located in Portland. 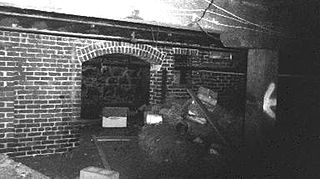 The Old Portland Underground, better known locally as the Shanghai Tunnels, is a group of passages in Portland, Oregon, United States, mainly underneath the Old Town Chinatown neighborhood and connecting to the main business section. The tunnels connected the basements of many hotels and taverns to the waterfront of the Willamette River. They were originally built to move goods from the ships docked on the Willamette to the basement storage areas, allowing businesses to avoid streetcar and train traffic on the streets when delivering their goods. 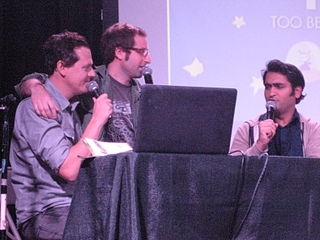 Luke Burbank is an American radio host and podcaster who hosts the Portland, Oregon-based syndicated variety show Live Wire Radio and the Seattle-based former radio program and current podcast Too Beautiful to Live. He was most recently co-host of "The Ross and Burbank Show" and host of "The Luke Burbank Show" on Seattle's KIRO-FM radio station. Burbank is also a correspondent for CBS News Sunday Morning.

Rick Emerson, formerly known as Rick Taylor, is a radio personality most known for The Rick Emerson Show, which was broadcast from Portland, Oregon, in one form or another, from 1997 to 2012. Emerson also co-hosted Drive-By Radio as "Rick Taylor" in Salt Lake City. He hosted the public affairs television show Outlook Portland. And he co-authored the book Zombie Economics. On January 2, 2012, Emerson announced his retirement from the broadcasting industry.

Brian McFayden is an American television personality. He has worked as an MTV News anchor and an MTV VJ. He worked at KGW, the NBC affiliate station in Portland, Oregon, from December 2016 to October 2017.

Too Beautiful to Live is a podcast originating from Seattle, Washington and Bellingham, Washington, co-hosted by Luke Burbank, CBS News Sunday Morning correspondent, host of Live Wire Radio and frequent NPR's Wait Wait...Don't Tell Me! panelist, and veteran radio producer and one time radio host Andrew Walsh. The podcast originated as a radio show on KIRO-FM which aired from January 7, 2008 to September 11, 2009. Upon its radio broadcast cancellation, it immediately transitioned to a podcast on September 14, 2009, and is still produced Monday through Friday.

Mike Russell is a writer and cartoonist who currently lives in Portland, Oregon. His best known work, Gossip girlCulturePulp appears regularly in The Oregonian. In addition to writing articles for the publication, his work has appeared nationally in a variety of mediums including: comic books, newspapers, posters, college lectures and magazines.

Welcome to That Whole Thing was a weekly podcast based in Portland, Oregon. It debuted in February 2013 and was hosted by Cort Webber and Bobby Roberts. New episodes were posted semi weekly.

The Independent Publishing Resource Center (IPRC) is a resource center for zine creation, letterpress printing, book binding and printing, based in Portland, Oregon, United States. The center was founded in 1998 by Chloe Eudaly, owner of Reading Frenzy and Show & Tell Press, and Rebecca Gilbert, worker-owner at Stumptown Printers.

The Gypsy Restaurant and Velvet Lounge was a restaurant and nightclub established in 1947 and located along Northwest 21st Avenue in the Northwest District neighborhood of Portland, Oregon, in the United States. Popular with young adults, the restaurant was known for serving fishbowl alcoholic beverages, for its 1950s furnishings, and for hosting karaoke, trivia competitions and goldfish racing tournaments. The restaurant is said to have influenced local alcohol policies; noise complaints and signs of drunken behavior by patrons made the business a target for curfews and closure. Concept Entertainment owned the restaurant from 1992 until 2014, when it was closed unexpectedly. 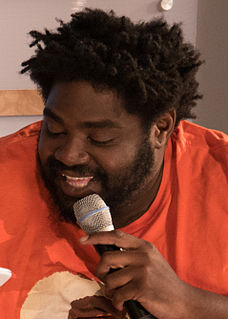 Ronald Kyle Funches is an American comedian, actor, voice actor, and writer. Born in California, Funches spent his early life in Chicago before relocating to Salem, Oregon, as a teenager. He began his comedy career in Portland, Oregon, at age 23. After moving to Los Angeles in 2012, he began appearing as a guest on several comedy series, including @midnight, Mulaney, and Kroll Show. 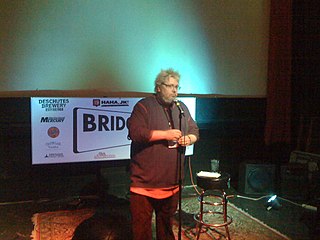 The Bridgetown Comedy Festival is a stand-up comedy festival located in the Hawthorne district of Portland, Oregon that took place every spring from 2008 to 2017, featuring standup comedy showcases, live podcasts, panel discussions and improv comedy. It was created in October 2007 by comedians Andy Wood and Matt Braunger and filmmaker Kimberly Brady.

Stumptown Comics Fest was a comic book convention, held annually in Portland, Oregon from 2004–2013. In the model of the Alternative Press Expo and the Small Press Expo, Stumptown was a forum for artists, writers and publishers of comic art in its various forms to expose the public to comics not typically accessible through normal commercial channels.

Movie Madness Video is a video rental shop and museum of film history in Portland, Oregon's Sunnyside neighborhood, in the United States.

Shrill is an American comedy streaming television series, based on the book Shrill: Notes from a Loud Woman by Lindy West, that premiered on March 15, 2019, on Hulu.

Cafe Nell is a restaurant in Portland, Oregon's Northwest District, United States. The restaurant was owned by Darren and Van Creely, as of 2014, and serves French cuisine.

Fuller's Coffee Shop is a diner serving standard American cuisine in Portland, Oregon's Pearl District, in the United States. Established in 1947, the restaurant has operated from its location in downtown Portland since 1960. It serves breakfast all day and has a cheeseburger with an unchanged recipe since the diner's establishment. Described as a greasy spoon, Fuller's has received a generally positive reception and appeared in an episode of the television series Grimm in 2017.