Faced with "past technical deficiencies in telecommunications systems and equipment and software…that were traced to basic inadequacies in the application of telecommunication standards and to the lack of a well defined…program for their review, control and implementation", the U.S. Department of Defense looked to develop a series of standards that would alleviate the problem. [1]

By 1988, the U.S. Department of Defense (DoD) issued Instruction 4630.8 (reissued in 1992, 2002, 2004) stating its policy that "all forces for joint and combined operations be supported through compatible, interoperable, and integrated Command, Control, Communications, and Intelligence systems. …[and that all such] systems developed for use by U.S. forces are considered to be for joint use." [2] To achieve this the director of the Defense Information Systems Agency (DISA) is charged with "developing information technology standards to achieve interoperability and compatibility…[and ensure that all] systems and equipment shall conform to technical and procedural standards for interface, interoperability, and compatibility". [2]

The MIL-STD-188 standards were created to "address telecommunication design parameters based on proven technologies." [2] To ensure interoperability, DISA made these standards mandatory for use in all new DoD systems and equipment, or major upgrades.

The mandatory use of these standards will aid significantly in achieving standardization and result in improvements in availability, maintainability, reliability, and supportability. This, in turn, will enhance lifecycle configuration management and logistic support with subsequent reductions in life cycle costs. [1]

The MIL-STD-188 series standards are encompassed by the DoD’s Joint Technical Architecture. [5]

For any manufacturer seeking to deviate from the MIL–STD-188 series standards (prior to the manufacture of an item) they must request to do so with the Joint Steering Committee (JSC) which is constituted under the Defense Communications Agency. For any DoD Agency to get a waiver to receive an item that deviates from the standards they also must apply to the JSC. [1]

Relation to other systems of standards

Currently the DoD is placing its emphasis "on the development of common standards for tactical and long-haul communications (the MIL-STD-188-100 series)." [2]

Note: The following list of documents are those that are presently active. Documents with three digit numbers followed by a letter of the alphabet indicate that they are revisions of an older version of that document.

According to the DoD the MIL-STD-188-100 series contains "technical standards and design objectives which are common to both the long haul and tactical communications systems." [1]

The current articles in this series include:

The current articles in this segment include:

According to the DoD the MIL-STD-188–300 Series contains "communications system standards and design objectives applicable to the field of long haul and point-to–point communications in support of the Defense Communications System (DCS) and the National Military Command System (NMCS), and also to provide the necessary interface with non-DCS equipment." [1]

The current articles in this series include:

Automatic Link Establishment, commonly known as ALE, is the worldwide de facto standard for digitally initiating and sustaining HF radio communications. ALE is a feature in an HF communications radio transceiver system that enables the radio station to make contact, or initiate a circuit, between itself and another HF radio station or network of stations. The purpose is to provide a reliable rapid method of calling and connecting during constantly changing HF ionospheric propagation, reception interference, and shared spectrum use of busy or congested HF channels. 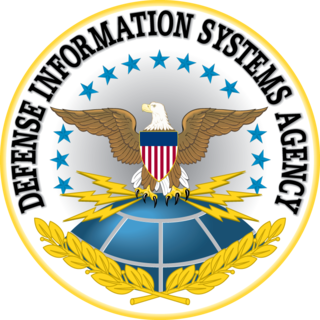 In NATO, a Standardization Agreement defines processes, procedures, terms, and conditions for common military or technical procedures or equipment between the member countries of the alliance. Each NATO state ratifies a STANAG and implements it within their own military. The purpose is to provide common operational and administrative procedures and logistics, so one member nation's military may use the stores and support of another member's military. STANAGs also form the basis for technical interoperability between a wide variety of communication and information systems (CIS) essential for NATO and Allied operations. The Allied Data Publication 34 (ADatP-34) NATO Interoperability Standards and Profiles which is covered by STANAG 5524, maintains a catalogue of relevant information and communication technology standards.

The Joint Tactical Radio System (JTRS) aimed to replace existing radios in the American military with a single set of software-defined radios that could have new frequencies and modes (“waveforms”) added via upload, instead of requiring multiple radio types in ground vehicles, and using circuit board swaps in order to upgrade. JTRS has seen cost overruns and full program restructurings, along with cancellation of some parts of the program.

Link 16 is a military tactical data link network used by NATO and nations allowed by the MIDS International Program Office (IPO). Its specification is part of the family of Tactical Data Links. 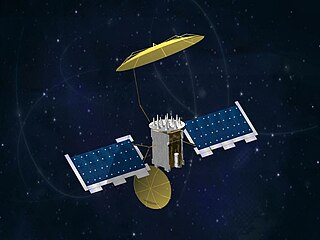 The AN/PRC-152 Multiband Handheld Radio is a portable, compact, tactical software-defined combat-net radio manufactured by Harris Corporation. It is compliant without waivers to the Joint Tactical Radio System (JTRS) Software Communications Architecture (SCA). It has received NSA certification for the transmission of Top Secret data. 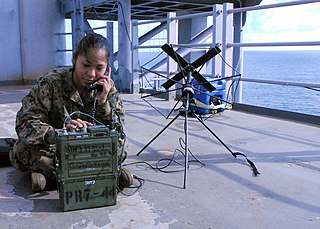 The British Armed Forces operates a wide range of communications and information systems. Some of these are specialised military systems, while others are procured off-the-shelf. They fall into three main categories: satellite ground terminals, terrestrial trunk communications systems, and combat net radio systems. Every part of the Army and the uses combat net radio, but only the Royal Corps of Signals and the Royal Air Force operates trunk systems and multi-channel satellite communications.

PM WIN-T is a component of Program Executive Office Command, Control and Communications-Tactical in the United States Army. PM WIN-T has been absorbed into PM Tactical Networks as Product Manager for Mission Networks.

The ARC-210 is a family of radios for military aircraft that provides two-way, multi-mode voice and data communications over a 30 to 512+ MHz frequency range. It covers both Ultra High Frequency (UHF) and Very High Frequency (VHF) bands with AM, FM and SATCOM capabilities. The ARC-210 radio also includes embedded anti-jam waveforms, including Havequick and SINCGARS, and other data link and secure communications features, providing total battlefield interoperability and high-performance capabilities in the transfer of data, voice and imagery. It features a separate guard receiver for monitoring 121.5 and 243 MHz while simultaneously monitoring the active channel selected. Transmitter power ranges from 5 to 23 watts, depending on frequency and mode. The radios communicates with other avionics over a MIL-STD-1553 data bus.

The ARC-231 Skyfire is a software-definable radio for military aircraft that provides two-way, multi-mode voice and data communications over a 30 Hz to 512 MHz frequency range. It covers both line-of-sight Ultra High Frequency (UHF) and Very High Frequency (VHF) bands with AM, FM and SATCOM capabilities, including Integrated Waveform (IW). The ARC-231 radio also includes embedded anti-jam waveforms, including Havequick and SINCGARS, and other data link and secure communications features, providing battlefield interoperability. The radios utilize the MIL-STD-1553 data bus.

X band or SHF Satellite Communication is widely used by military forces for beyond line of sight communications. X band is used because it provides a compromise between the characteristics of different frequency bands which is particularly suited to the needs of military users. The characteristics include interference and rain resilience, terminal size, data rates, remote coverage and whether it is reserved for governmental use.