Mac-Talla (Scottish Gaelic for "echo") was a Scottish Gaelic "supergroup" formed in 1992 at the suggestion of record label owner Robin Morton. [1] Morton credited the individual band members as some of those responsible for bringing Gaelic music to wider public attention. [1]

The group comprised three singers: Eilidh Mackenzie, a recipient of the An Comunn Gàidhealach Gold Medal, [2] Christine Primrose, [3] and Arthur Cormack; plus harpist and cellist Alison Kinnaird (also Morton's spouse [1] ), described by the Saltire Society in 2015 as one of Scotland's "most influential musicians" [4] and keyboardist Blair Douglas, [5] formerly of Runrig.

The band was described by the Scottish Traditional Music Hall of Fame, and by The Rough Guide to World Music: Africa, Europe and the Middle East, as a "Gaelic supergroup". [6] [7] Q Magazine also called them a "supergroup". [3]

Their only album, Mairidh Gaol is Ceòl (there is a Gaelic proverb, Thig crìoch air an t-saoghal / Ach mairidh gaol is ceòl, "The world will come to an end / But love and music will endure"), [8] was released in 1994 by Morton's Temple Records. [3] [7] In reviewing the album, Scotland on Sunday said "This has to be THE Gaelic showcase outfit for the 1990s". [3] Rough Guide: Scottish Highlands and Islands described the album as featuring "glorious harmony and solo singing, accordion and harp". [9] 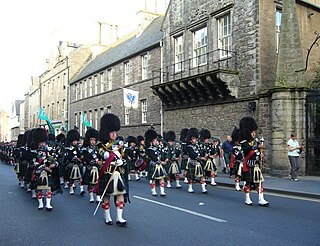 Pibroch, piobaireachd or ceòl mòr is an art music genre associated primarily with the Scottish Highlands that is characterised by extended compositions with a melodic theme and elaborate formal variations. Strictly meaning "piping" in Scottish Gaelic, piobaireachd has for some four centuries been music of the Great Highland Bagpipe. Music of a similar nature, pre-dating the adoption of the Highland pipes, has historically been played on the wire-strung Gaelic harp (clarsach) and later on the Scottish fiddle, and this form is undergoing a revival. 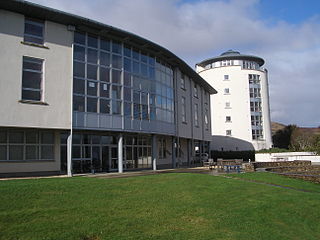 Sabhal Mòr Ostaig is a public higher education college situated in the Sleat peninsula in the south of the Isle of Skye, with an associate campus at Bowmore on the island of Islay, Ionad Chaluim Chille Ìle. Sabhal Mòr is an independent Academic Partner in the federal University of the Highlands and Islands. Uniquely, its sole medium of instruction on degree courses is Scottish Gaelic.

Mill a h-Uile Rud is a Seattle-based band who sing in Scottish Gaelic. 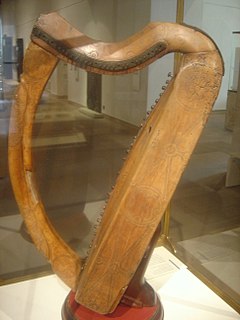 The Celtic harp is a square harp traditional to Ireland and Scotland. It is known as cláirseach in Irish and clàrsach in Scottish Gaelic. In Ireland and Scotland, it was a wire-strung instrument requiring great skill and long practice to play, and was associated with the Gaelic ruling class. It appears on Irish and British coins and coat of arms of the Republic of Ireland, the United Kingdom and Canada.

The Scots Trad Music Awards were founded in 2003 by Simon Thoumire to celebrate Scotland's traditional music in all its forms and create a high profile opportunity to bring the music and music industry into the spotlight of media and public attention. Nominations are made by the public and in 2019 over 100,000 public votes were expected across 18 categories. 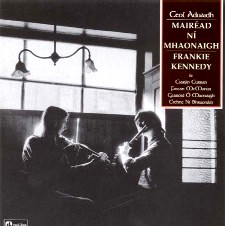 Ceol Aduaidh is the first studio album by Frankie Kennedy and Mairéad Ní Mhaonaigh, originally released in 1983 on the Gael-Linn Records label. It was reissued in 1994 by Green Linnet Records and a remastered edition was issued in 2009 by Gael-Linn.

Joy Dunlop is a Scottish broadcaster, singer, step dancer and educator from the village of Connel in Argyll, who now lives in Glasgow, Scotland. Singing predominantly in Scottish Gaelic, she performs folk music, song and dance in a contemporary style rooted in the tradition. She is a weather presenter for BBC Scotland and BBC ALBA.

Arthur Cormack is a Scottish Gaelic singer and musician from Portree, Isle of Skye and was educated at Portree High School.

Alison Kinnaird is a glass sculptor, Celtic musician, teacher and writer born in Edinburgh, Scotland in 1949. She is one of the foremost and most original modern glass engravers in Scotland.

Griogair Labhruidh is a Scottish Gaelic poet, musician, and hip-hop producer/MC from Gartocharn with strong roots in the Gaelic tradition of Ballachulish in the Scottish Highlands. After many years recording the Gaelic traditions of his local area, Gaelic became his dominant language and he is one of the only musicians who can speak a mainland Gaelic dialect, rather than the standard Hebridean Gaelic. Well-versed in the ceòl mòr piping tradition of his own homeland, Labhruidh is a member of the Afro-Celt Sound System and has produced Gaelic music in nontraditional genres, such as hip-hop and fusion. In 2014, Labhruidh became the main vocalist for the Gaelic supergroup Dàimh. He was Gaelic Singer of the Year at the MG Alba Trad Music Awards of 2015. Labhruidh is planning to release a hip-hop album by the end of 2017, writing, recording and producing the first fusion album of its kind.

Christine Primrose is a Gaelic singer and music teacher. She was born in Carloway, Lewis, but she currently lives on the Isle of Skye.