Madison is a city in and the county seat of Jefferson County, Indiana, United States, along the Ohio River. As of the 2010 United States Census its population was 11,967. Over 55,000 people live within 15 miles (24 km) of downtown Madison. Madison is the largest city along the Ohio River between Louisville and Cincinnati. Madison is one of the core cities of the Louisville-Elizabethtown-Madison metroplex, an area with a population of approximately 1.5 million. In 2006, the majority of Madison's downtown area was designated the largest contiguous National Historic Landmark in the United States—133 blocks of the downtown area is known as the Madison Historic Landmark District. 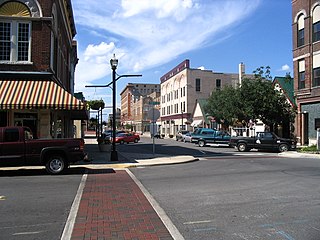 Anderson, named after Chief William Anderson, is a city in and the county seat of Madison County, Indiana, United States. It is the principal city of the Anderson, Indiana Metropolitan Statistical Area which encompasses Madison County. Anderson is the headquarters of the Church of God (Anderson) and home of Anderson University, which is affiliated with the Christian denomination. Highlights of the city include the historic Paramount Theatre and the Gruenewald Historic House.

Madison High School may refer to:

Terre Haute South Vigo High School is a public high school located in Terre Haute, Indiana. As the name implies, the school's district covers the southern portion of Terre Haute, as well as most of southern Vigo County, the county in which Terre Haute is located.

Penn High School is a public high school located just outside Mishawaka, Indiana, United States, near South Bend. It is the only high school in the Penn-Harris-Madison (PHM) School Corporation.

Jasper High School (JHS) is a public high school located in Jasper, Indiana, that serves grades 9 through 12 and is one of five in the Greater Jasper Consolidated Schools' district. The principal is Brian Wilson. JHS has an enrollment of approximately 1,050 students. The school's colors are black and gold. The school song is set to the tune "Indiana, Our Indiana", and the mascot is the wildcat.

Madison Central High School is a public high school located in Richmond, Kentucky, United States. The school has an enrollment of approximately 2000 students.

Madison-Grant High School is a public high school located in unincorporated Grant County, Indiana, near Fairmount. It is the only high school in the United States with the Argyll mascot. It is a part of the Madison-Grant United School Corporation.

The Eastern Indiana Athletic Conference (EIAC) is a distinguished, eight-member IHSAA-sanctioned high school athletic conference. Current members consist of Batesville, Connersville, East Central, Franklin County, Greensburg, Lawrenceburg, Rushville, and South Dearborn. All eight member schools are located in rural southeast Indiana, spread across Dearborn, Decatur, Fayette, Franklin, Ripley, and Rush counties. The EIAC was founded in 1956 when Brookville, Cambridge City, and Hagerstown of the East Central Conference joined with Aurora, Batesville, and Lawrenceburg of the Southeastern Indiana Conference. Batesville and Lawrenceburg are the only two of the original six founding schools that haven't consolidated or left the conference. North Dearborn joined the conference in 1962, which eventually consolidated into East Central in 1973. In 1974, Greensburg parted ways with the South Central Conference to join the EIAC. Aurora consolidated into South Dearborn in 1978 and Brookville consolidated into Franklin County in 1989. With the exception of 1962-66, 1973-74, 1977-85, and 1974-77, the conference had been a six-member league until 2013 when Connersville and Rushville joined.

The White River Conference was an IHSAA-sanctioned conference located within rural areas of East Central Indiana, that existed twice, once from 1954 to 1977, and from 1989 to 2010. The first version of the conference was founded as a home for high schools in Madison County who weren't in the Central Indiana Athletic Conference. The conference would expand quickly from six to nine schools, as two new high schools in Anderson and Middletown, a school in Henry County, were added within two years. Membership was generally not stable until 1969, as Madison Heights left, Highland was forced out and eventually added back into the conference, St. Mary's closed, member schools consolidated, and schools from neighboring Delaware and Hancock counties were added. Eventually, large disparities in enrollment causing the conference to disband, as city and consolidated schools outgrew their rural counterparts.. Schools would move into the Big Blue River Conference, Classic Athletic Conference, and Mid-Eastern Conference.

Pendleton Heights High School, also known as "PHHS," is a public high school in Pendleton, Indiana. It is part of the South Madison Community School Corporation and has an enrollment of around 1,400 students.

Kingston is an unincorporated community in northeast Madison County, Arkansas, United States. It is located at the intersection of Arkansas highways 21 and 74. The community is located in the Kings River valley, the stream flows past just to the west of the town.