After the 1988 Olympic Games, she admitted that she got stoned three nights during the week prior to competition. She finished 19th in the 3,000 meters and 11th in the 5,000 meters event. [2]

According to the New York Times, after Docter qualified for the 1992 team in three speed-skating events — 1,500, 3,000 and 5,000 meters — she told the media about her drug addiction over the past 10 years, revealing its destructive nature and how she finally confronted the problem by seeking help. [2]

Docter competed in tennis and athletics in high school, and later attended the University of Wisconsin. She is the sister of fellow Olympic athlete Sarah Docter. [1]

Eric Arthur Heiden is an American physician and a former long track speed skater, road cyclist and track cyclist. He won an unprecedented five individual gold medals, and set four Olympic records and one world record at the 1980 Winter Olympic Games. Heiden was the most successful athlete at those Olympic Games, single-handedly winning more gold medals than all nations except for the Soviet Union (10) and East Germany (9). He is the most successful Winter Olympian from a single edition of any Winter Olympics. He delivered the Athlete's Oath at those same 1980 Games. His coach was Dianne Holum. 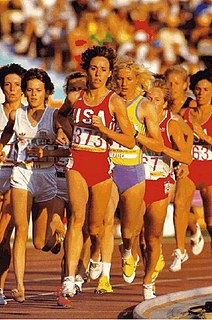 Mary Teresa Slaney is a retired American middle-distance runner. During her career, she won gold medals in the 1500 meters and 3000 meters at the 1983 World Championships, and was the world record holder in the mile, 5000 meters and 10,000 meters. In total, she set 17 official and unofficial world records, including being the first woman in history to break 4:20 for the mile. She also set 36 US national records at distances ranging from 800 meters to 10,000 meters, and has held the US record in the mile, 2000 meters and 3000 meters since the early 1980s, while her 1500 meters record stood for 32 years. In 2003, she was inducted into the National Track and Field Hall of Fame.

Bonnie Kathleen Blair is a retired American speed skater. She is one of the top skaters of her era, and one of the most decorated athletes in Olympic history. Blair competed for the United States in four Olympics, winning five gold medals and one bronze medal. 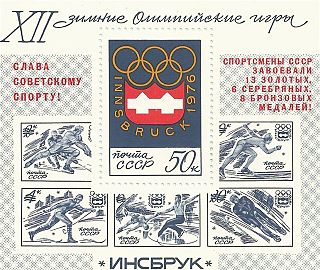 The 1976 Winter Olympics, officially known as the XII Olympic Winter Games, was a winter multi-sport event held in Innsbruck, Austria, from 4 to 15 February 1976. A total of 1,123 athletes representing 37 National Olympic Committees (NOC) participated in 37 events from 10 different sports and disciplines. Two events were contested for the first time: the figure skating discipline of ice dancing, and the men's 1,000 metres in speed skating. 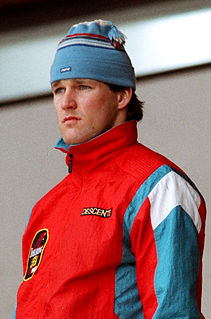 Daniel Erwin Jansen is a retired American speed skater. A multiple world champion in sprint and perennial favorite at the Winter Olympics, he broke a ten-year Olympic jinx when he won a gold medal in his final race, which was the 1,000 meters in the 1994 Winter Games. 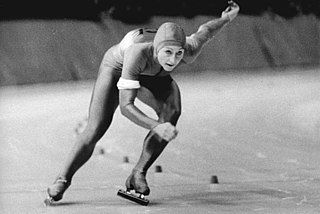 Christa Luding-Rothenburger is a former speed skater and track cyclist. She was born in Weißwasser, East Germany. Luding is one of the few athletes who have competed in both the Summer and Winter Olympic Games, and the first female to win a medal in both the Summer and Winter Games. She is the only athlete to win Winter and Summer Olympic medals in the same year (1988), a feat that is no longer possible due to the staggering of the Winter and Summer Olympic years. In speed skating, she is a two-time Olympic gold medallist, while she is an Olympic silver medallist in cycling.

Hong Kong, a special administrative region (SAR) of the People's Republic of China, sent a delegation to compete at the 2006 Winter Olympics in Turin, Italy from 10–26 February 2010. The delegation competed under the formal name Hong Kong, China. This was the SAR's second appearance at a Winter Olympic Games, and the delegation consisted of a single athlete, short track speed skater Han Yueshuang. Entered in three events, her best performance was 18th in the women's 1,000 metres race.

Sheila Grace Young-Ochowicz is a retired American speed skater and track cyclist. She won three world titles in each of these sports, twice in the same year. In 1976, she also became the first American athlete to win three medals at one Winter Olympics.

Leah Jean Poulos-Mueller is an American retired Olympic Games medalist in speed skating with a total of 3 Olympic silver medals won between 1972 and 1980. She garnered more than 65 Olympic, world, and international speed skating medals and titles during an illustrious career that spanned 12 competitive years and three Olympic teams.

Andrea Ehrig-Mitscherlich is a retired East German speed skater. She was one of the world's best long-distance skaters in the 1980s.

Sergey Anatolevich Khlebnikov was a Russian speed skater who competed for the Soviet Union in the 1980 and the 1984 Winter Olympics.

Hong Kong, a special administrative region (SAR) of the People's Republic of China, sent a delegation to compete at the 2010 Winter Olympics in Vancouver, British Columbia, Canada from 12–28 February 2010. The delegation competed under the name "Hong Kong, China" (中國香港). This was the SAR's third appearance at a Winter Olympics, and the delegation consisted of a single short-track speed skater, Han Yueshuang. Han's best performance was 24th in the women's 500 metres.

Sarah Beth Docter is a retired American short track and long track speed skater. She won several U.S. national championships in the 1970s, and in 1978 she won U.S. national titles in both short track and long track. That year she went on to the world short-track championships, in which she won the 1500 m and 3000 m events and the overall competition. In 1980, she competed in all speed skating events at the 1980 Winter Olympics in Lake Placid, New York, with the best achievement of tenth place in the 3000 m. In addition to skating career, she is also a cyclist, and once took part in the World Cycling Championships.